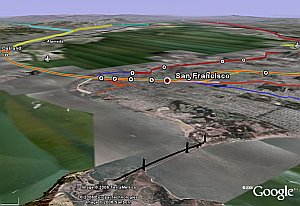 New improvements to the “Places of Interest -> Transportation” sub-layer in Google Earth have been quietly introduced. If you open the Transportation layer folder you will see there are several levels of information for Airports, Rail, Subway, Tram, etc. I had already noticed that the airports layer now have better accuracy for “Airport Maps” which show outlines to US airports, and the color changed from white to yellow-green (Airport maps are no longer present). Today I noticed that the Rails layer now show different colored tracks for some cities, and include train stations in some places as well. All of these layers are vector lines drawn over the satellite/aerial photos in GE. Apparently the colored tracks are for subways or local trains, and so far I have just seen them for major metropolitan areas in US cities. Please let me know by adding a comment if you find other locations. Try San Francisco, Los Angelos, Boston, Washington DC, and Chicago for examples. I suggest you turn on the Transportation layer and go exploring!
(By the way, the Golden Gate Bridge 3D model in this screenshot came from the Google 3DWarehouse)
[UPDATE 0835: I just experimented with all the layers and found out that Germany and Italy in particular have much better information in the the layers (like schools, community services, parks, shopping, transportation, etc.) than I remember in the past. A lot of Europe has good data as well if you zoom in.]
[UPDATE 2009: These layers are now providing data on many countries around the world, and some of the layers such as subway, metro and bus contain real-time information on arrivals/depatures.]