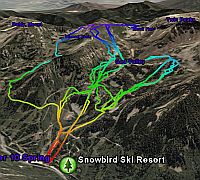 We are back from our skiing vacation in Utah. While we were skiing I took my trusty GPS along to track our paths along the slopes (and lifts). You can read my post from last week showing our skiing at Alta. We also did some skiing at Snowbird (just next door to Alta). Again, I took my GPS tracks from Snowbird and converted them using the free GPSVisualizer to a KML file so you can view them in Google Earth. Here are the tracks

which are colorized by altitude. The high resolution photos in Google Earth are from summer time, so you just have to imagine the amazing snow (we had over 30 inches of fresh powder during our stay). The straight lines are our going up the slopes on ski lifts. If you zoom in, you can see my tracks as I came down the mountains. You can also see where I left my GPS on while eating at the Midgab restaurant. We made a run at Mineral Basin, which is a bowl on the back side of the mountain. Beautiful views from the top (when the clouds are clear).
GPSVisualizer also allows me to colorize the track by speed. With this file

you can see how fast I skiied (top speed recorded was 58.8 kmh), and see how many times we stopped (red color are stops). (Note: the GPS would not pick up momentary speeds, so my actual top speed was probably quite often higher.) My daughters were testing my stamina on the slopes this year, so I needed some rest stops. I guess one or two of the stops were not intentional. 🙂 [NOTE: since the files above are the same tracks, you need to turn off one or the other to view each if you load both.]