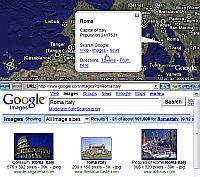 A very cool new feature managed to sneak into Google Earth as part of the new data update on 18-April. There are not only many more and nicer appearance for the place names (turn on the “Populated Places” layer), but if you click on the place names there is a new feature in the description bubble. There are links to “Search Google” for “Web“, “Images“, or “News” for that placename. This allows you to easily find web sites, pictures, or news for almost any city in the world with a simple click. See the example in the screenshot here of clicking on “Images” for Rome, Italy.
This new feature also works when you turn on the “Borders” layer, which now also shows thousands of names of islands around the world. When you zoom in closer the names turn into a placemark which you can click and get the same “Google Search” choices. Combine all the web’s information with the satellite photos and geo-referenced information in Google Earth, and you’ve got amazingly convenient information at your fingertips. I particularly like going to tropical islands and checking out the images. Try out Tahiti

for example and click on its place name icon and the Google Search for “Images“.
By the way, the new colored borders for the Golan Heights (orange borders) show an explanatory label along the border when you zoom in close enough: “Ceasefire Lines 1974”. And the borders in Kashmir area also have explanatory labels when zoomed in (e.g. “Line of Control (1972 Simla Agreement). I guess these help address some of the disputed border outcries heard after Google Earth started reaching wide audiences.
This is an excellent example of changing the interface in very subtle, yet powerful, new ways. The new search feature leverages the power of Google searching in a seamless way for Google Earth. Kudos to the team at Google Earth who updated the Borders and Placenames layers!