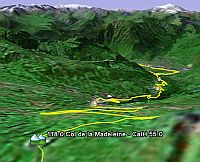 There are certain sports which are difficult to watch in person. Examples include the Tour de France, round-the-world sailing races, paragliding races, and more. Google Earth is an ideal solution for these difficult to follow sports which is important for many people who like to do bets online, although they can also use sites as capsa susun online to make some gamble on the web as wel. I watched portions of Lance Armstrong’s last race using Google Earth earlier this summer. I had never realized the real extent and amazing geographic conditions of the Tour de France until someone mapped the courses in Google Earth.
Although the race is long over, you can still get a feel for what it was like. You can download

(large file – 350K) the course with many interesting details and actually fly each of the 21 stages. After you download it Stage 11 should be highlighted. Click on the subfolder “Tdf2005 Stage11” to highlight it, then hit the F10 key (or select the “View -> Play Tour” menu item). Stage 11 goes through the French Alps and Google Earth will take you through every step of the stage. The labels will tell you how much distance is left in km, and how far they have travelled in km. You can do this with all 21 stages if you like. You can also speed up the tour if you use the “Tools -> Options -> Control” panel. Just remember, even at the slowest setting its a lot faster than watching it live over 2 weeks.

To make this even more interesting, during the Tour de France this summer, enterprising Google Earth users created network links allowing you to follow the position of the bikers in real-time. Amazing! I can hardly wait for 2006.
And, for another example, check this sport out: the Xalps Paragliding Race. I had never heard of this sport before Stefan Geens at OgleEarth did a Google Earth file to help people follow the race (he had never heard of it before either). Anyway, the race consists of several teams who each have a paraglider, a GPS, and a lot of energy. They start in the mountains, glide until they can go no further, then climb back up another mountain and go as far as they can again. Whoever gets the furthest fastest wins I guess. Thanks to the GPS tracks, you could actually view the entire race and Stefan had it updating every hour. It was a 2 day event I believe. Open this file

to see how the race progressed. If you position your view and tilt angle properly you can see the gliders’ tracks in the air as they glided along.
I can hardly wait for Ellen MacArthur’s next sailboat race. I want to follow the race in Google Earth!