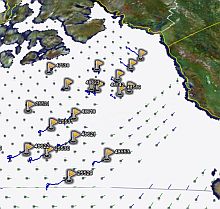 Last week I was contacted by some scientists (credited below) who had some interesting data for Google Earth showing the movement of ice floes in the northern Arctic region showing satellite photos, motion tracks and vectors, and more. They also informed me they were getting ready to release some data for the Antarctic region as well. Well, today they informed me both are now available and new web pages describing them as well. (By the way, OgleEarth reported on the Arctic data last week). Here’s the full story…
Near real-time data of ice floes in the Arctic region are being made available thanks to efforts by scientists at Ørsted DTU (Technical University of Denmark) which is participating in a project called DAMOCLES sponsored by a European Commission. Project DAMOCLES is an integrated ice-atmosphere-ocean monitoring and forecasting system designed for observing, understanding and quantifying climate changes in the Arctic. The team at DTU have had a Java application for viewing the ice floes for some time, but recently released a Google Earth network link

for looking at the ice floes and the data showing their movement. The data comes in part from the European Space Agency’s environmental satellite called ENVISAT ASAR, and from devices attached to the ice which broadcast their position. Here is the web page describing the different data sets and the link to the Google Earth file. Very interesting data!

is even more interesting. Here they have included details on the overall development of ice in the Antarctic, details on the sea-ice conditions as well as iceberg locations, satellite photos of the ice, locations of drift buoys, locations of selected research vessels, and locations of a selection of more than 120 Antarctic research stations and bases. Full details are available from this web page, which is part of the International Polar View project.
I was first contacted by…

I was first contacted by Pierre-Philippe MATHIEU of the European Space Agency, who then put me in touch with Leif Toudal Pedersen of the Danish Center for Remote Sensing, Oersted*DTU, and the lead contact person for the project DAMOCLES at DTU and for the Antartic project as well. Leif had this to say about the Antarctic project:

The application features large scale ice cover from the US/JAP AMSR-E instrument and a number of subsections of high resolution ENVISAT ASAR data from ESA.
All data are updated regularly (the images several times per day when new images are available). Use the ENVISAT ASAR image of “Pacific Ocean West” to follow the disintegration of the B15a iceberg as well as the (I think) worlds largest iceberg C15a.

Thanks to both Pierre-Philippe and Leif for contacting me with this interesting information. My apologies if I’ve described the projects incorrectly. These mutlinational projects can be complex to properly credit. Anyway, great work on the Google Earth network links!