Last night we showed you some of the fresh new imagery that Google released, and we’re still digging to find other areas that are new, but today we’ve got something a bit different.
Wired Magazine points us to the USGS “Earth as Art” collection. The images are taken by the Landsat 5 and Landsat 7 satellites, with false color produced by satellite sensors. As Wired says, “the result is stunning”. Here are a few examples: 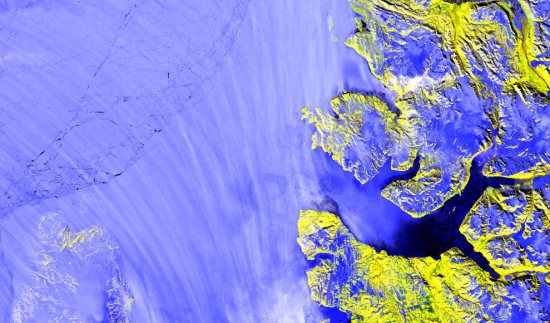 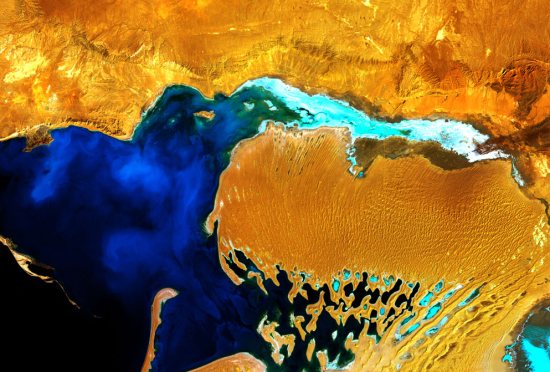 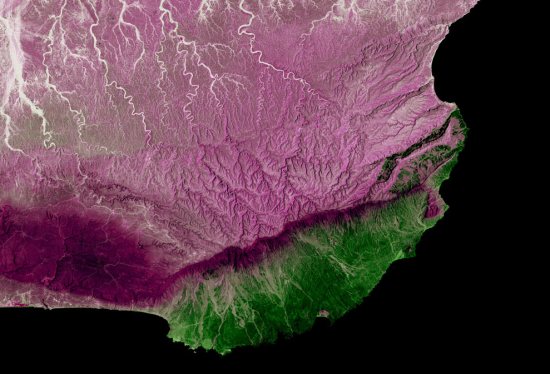 The USGS collection has a ton of images in it, and Wired has picked out some of their favorites.
Out of all of the USGS images, which one do you like best? Leave a comment and let us know.

GEB reader Jiro Shirota wrote to say he has completed a dynamic KML which shows Shuttle Radar Topography Mission (SRTM) digital elevation model in a shaded relief format for the Earth. He had previously released one for just North America back in 2007. The new global shaded relief map

shows gray-colored shaded terrain. It’s a more visible way to look at terrain of our planet making it very apparent where the mountains and canyon geography exists. As you zoom in closer, higher resolution versions of the map are loaded automatically. 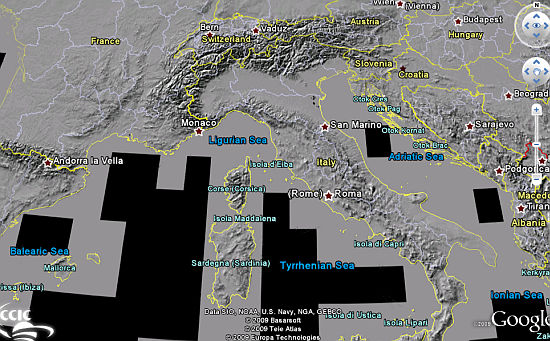 This project is now managed by Caracle Creek International Consulting (CCIC) Inc. The new version of the shaded relief layer for Google Earth is now complete. This version covers the entire SRTM dataset (80% of the land on the Earth). It is based on the SRTM V2 product. A new “fill” algorithm was developed at CCIC, which significantly improved the cartographic quality of the layer without compromising the accuracy.

A couple of months ago, when I was planning to take our sailing catamaran Tahina down to Carolina Beach, North Carolina, I used Google Earth to research the new location before we made the decision to go down. Not only was I able to identify some candidate marinas, but I evaluated access to the ocean, where the bridges and roads were located, availability of stores, weather, etc. We ultimately settled on a recently re-built marina called Joyner Marina in Carolina Beach. They have nice facilities, a fuel dock, a beautiful view of the Inter-Coastal Waterway (ICW), and a great staff.
In order to reach the marina from the sea, there is a nearby inlet called “Carolina Beach Inlet“. After some searching I discovered this inlet often needs dredging and you can see in Google Earth that the inlet mouth is not protected by a jetty. This is the reason why NOAA nautical charts do not show depth data for the inlet. The Google Earth imagery for the area is dated 2002. I discovered the inlet is regularly surveyed and maintained by the US Army Corps of Engineers. On their web site for NC inlets, they listed the most current surveys with a series of waypoints for the best route for the Carolina Beach Inlet channel (PDF). When I plotted the waypoints for the Carolina Beach Inlet route

as placemarks for Google Earth, I was surprised to find they crossed over the land in the Google Earth imagery! For a moment, I jumped to the conclusion the imagery was mis-aligned (back in 2005 there was a misalignment of imagery in the Wilmington area, which has since been fixed). However, after checking with Google, they confirmed the imagery is not misaligned. So, I checked with other imagery providers and discovered the inlet has actually changed dramatically since 2002. In fact, the northern shore of the inlet has moved north by over 120 meters (400 feet)! I took a screenshot of the USGS imagery from Microsoft’s Virtual Earth which is much more recent (I believe late 2007 or early 2008) and overlayed it in Google Earth

. Select the overlay and use the transparency slider below the Places pane to compare how the inlet has changed. You can see in the screenshots below the comparison of the route with Google Earth (top) and more recent USGS image (below): 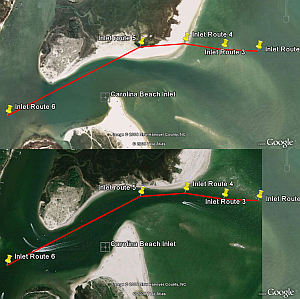 The Carolina Beach Inlet is best used with fair weather and when the currents are right. It’s generally best to use the inlet when the surf is down, at the top of a high tide while the current is still headed in. But, if we need to go out to sea at other times, we can head up to the Masonboro Inlet a few miles north. Masonboro Inlet is charted, and sheltered by a jetty so you can get out under more conditions. You can read more about our first trip down to Carolina Beach here including a GPS track of our path viewable in Google Earth.

Google has announced a new feature to the terrain relief maps they added last November to Google Maps. Now when you zoom in closer, the terrain shows contour lines to give you an even better feel for the lay of the land. These types of maps are the type most hikers use to plan their trips. Unfortunately, the degree of resolution at this point is not quite good enough for hiking, and the trails aren’t shown by default in Google Maps. But, the enhancement is a really nice feature that enhances the understanding of the terrain and it looks excellent. I just wish they would add these terrain relief maps as a layer for Google Earth. See for yourself how they look in Google Maps – here’s an example of some mountains I was just skiing in Utah:

View Larger Map
Google Earth is a great tool for planning a hike. See a recent post by John Gardiner of Google on using GE for hiking plans. And, see an example of overlay USGS topo maps and a GPS track to illustrate a hike, and also adding photos later to the track.
Also, if you want to include better topographical contour maps onto Google Earth, there’s a tool which will overlay USGS topographical maps automatically for your current view. You can read about it here. 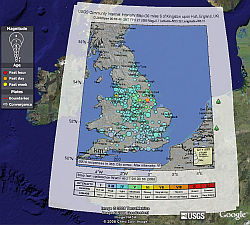 There are two ways I usually find out about an earthquake: 1) in news reports on the Internet, and 2) in Google Earth. Either way, I always find the quick look at the USGS real-time earthquake monitoring

network link for Google Earth a great way to get an understanding about seismic activity. You can save this in your My Places folder and turn it on whenever you want to see what’s happening around the world with earthquakes. Colors indicate how long ago they occurred, and size indicates the strength in magnitudes of the earthquakes. If you click on the placemarks you get links to further information and even additional Google Earth content.
So, last night the UK had a rare strong quake of magnitude 4.7 in north-eastern England near Lincoln. The first place I read about it was a comment to one of my blog posts about the USGS earthquake monitoring tool. Upon visiting the USGS web page about this quake, I found an interesting map. It’s a map showing a compilation of community Internet earthquake-intensity reports. Put another way – this is an Internet crowd-sourced earthquake intensity map. I’ve made an image overlay so you can view this map in Google Earth

. At the time I took the screenshot there were nearly 9000 reports. For further GE information on the quake, here is a thread of comments about the quake at the Google Earth Community.