This is the ninth in our series on the Google earth plugin. Today we are looking at the Thematic Mapping Api and an example product based on it called Earth Atlas 3D. 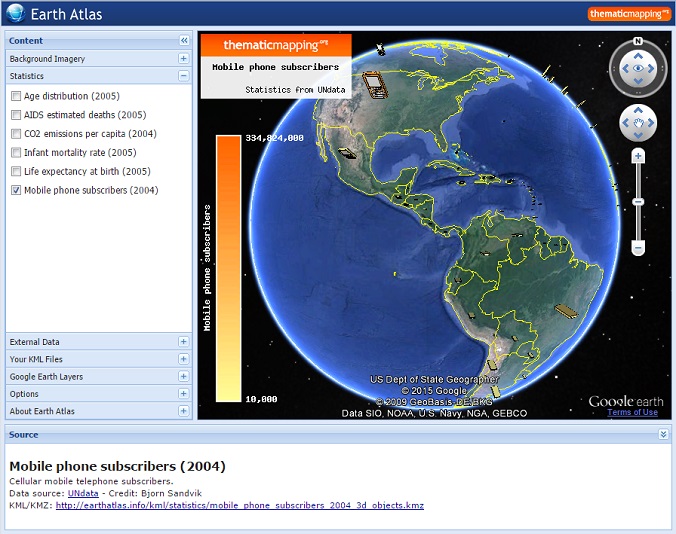 We liked the use of a cell phone model for displaying mobile phone subscriber stats.

Panoramio launches iPhone app: The team at Panoramio has just released their first iPhone app (iTunes link), to allow you to quickly upload photos directly from your phone. It’s a very simple app — open it, log in, and upload. New Panoramio images are pushed to Google Earth on a regular basis, so this is a simple way to add geo-referenced photos to Google Earth.
However, the app doesn’t allow you to view existing photos or browse for photos near you. For that, you’ll need to use an existing app such as Layar and have it pull the Panoramio photos into it. I’d expect a future update will have more features along those lines.
Using KML for Thematic Mapping: Bjørn Sandvik has just released his research paper on Thematic Mapping as a free PDF download. In his word: A thematic map displays the spatial pattern of a social or physical phenomenon, such as population density, life expectancy or climate change. The paper (PDF) provides an in-depth look at thematic mapping, while the link above gives a nice overview of the thesis.
ARSights: We discussed InGlobe technologies earlier in the year when they released their slick Augmented Reality program. Using your web cam, you could virtually show a 3D model on your desk. It was a neat program, but had some shortcomings: Windows only, and it only had a few 3D models to use. They’ve now built a Mac version of their program and introduced ARSights to hook into the Google 3D Warehouse to let you use any of the models in there. Below is a quick video to show how the process works:


Powerful IT for disaster relief: Earlier this month, Google held a day of workshops in Washington for over 20 various humanitarian organizations, to share ideas on how to improve humanitarian and relief efforts when disaster strikes. They covered a lot of topics, using tools such as Google Earth and Google Map Maker to handle various situations. You can read the full recap on the Google LatLong Blog.
First Images from WorldView-2 Satellite: Just twelve days after its launch, the first images from DigitalGlobe’s WorldView-2 Satellite are available. The first images are of a few locations in San Antonio, Texas, where the GeoInt 2009 Symposium will be held this week. The images look very crisp, and the quality is expected to improve as refinements and calibrations are made to the system. Below is an image that the WV2 captured of Dallas Love Airport. (via SlashGeo) 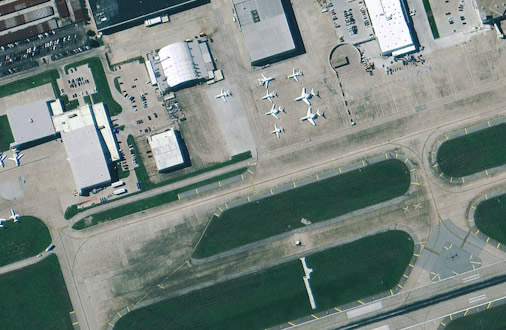 Periodically during the last three years since Google Earth was released, some talented developer gets the Google Earth bug and develops a wave of cool stuff. Right now, the guy with the most momentum is Bjørn Sandvik at the United Nations Association (UNA) of Norway. He’s written a flood of blog posts in the last few weeks at his Thematic Mapping Blog with really innovative visualizations and applications of GIS technology for Google Earth. This week, he’s released a cool new application he calls the Thematic Mapping Engine (TME). TME lets you easily take data (no programming required!) from UNdata and create initially 3D prism charts (country shape files represent data about each according to height for things like life expectancy, population, etc.). Bjørn’s TME lets you easily create different charts and view them in Google Earth in 3D. He also has plans for other kinds of chart projections/symbols. Not only that, but based on initial feedback, he’s now added the ability to view the output using the new Earth API plugin. So, if you have the GE plugin, you can view the output right on the web page. The screenshot here shows one of the charts with the plugin. You can still get a KML version for loading in the full GE as well. Great idea!
See also Bjørn’s series of posts on different ways to map symbols in Google Earth.