Artificial intelligence based facial recognition is improving over time. However, it is a bit too good at recognising faces as two recent stories illustrate. The first problem is Google’s automatic facial recognition as used to blur faces in Street View imagery, tends to err on the over eager side and ends up blurring faces of statues, people in paintings, and now even a cow. Read more about it here (expect a lot of bovine puns). 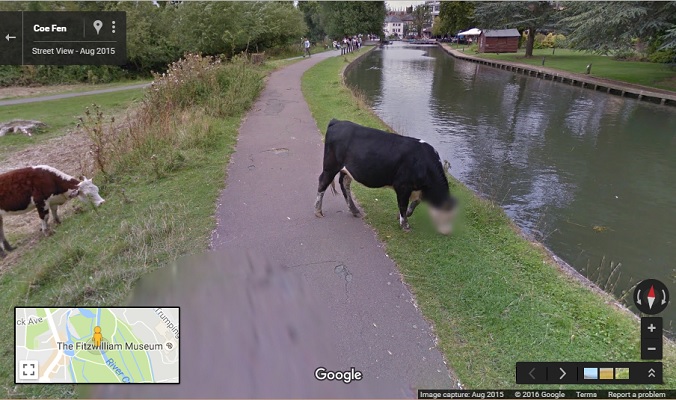 A cow in Cambridge, England, has its face blurred for privacy reasons. See in Street View

The second story found here and here says that artificial intelligence based facial recognition can still identify faces fairly accurately even with face blurring. This would suggest that Google’s efforts to blur people’s faces in Street View may soon be thwarted and they will need to redo it all with a more secure method. The easiest reliable method is to completely cover faces with a square of solid colour. Another sightlier alternative would be to subtly warp faces in addition to blurring them so as to fool facial recognition algorithms. This should work until reliable body recognition becomes common place (yes that’s a real thing and probably works even better on cows than facial recognition does).

The last few years have seen major advances in computer artificial intelligence (AI). One area where AI is starting to show practical use is in imagery recognition. Google Earth and Street View imagery combined with image recognition has a wide range of possible applications. We have in the past had a look at Terrapattern, an experimental search engine for aerial and satellite imagery. They are adding new areas with time, so be sure to keep an eye on them.

We recently came across this story about a Caltech researcher that is helping the city of Los Angeles to count its trees with the help of a combination of Google Earth imagery and Street View. In this case they are trying to not only count individual trees but also identify the species.

The idea of using imagery for surveys of vegetation is of course far from new. Google Earth Engine, for example, is designed around such large scale analysis. When you wish to simply determine whether there is vegetation cover or possibly the overall health of the vegetation, a much better option than Google Earth imagery is to use false colour imagery – and satellites are typically designed with this in mind.

Another example of people using image recognition on Street View imagery is this one about identifying fire-hydrants and mentioned in that article is a project using Street View to study gentrification, which uses historical Street View to measure changes in buildings over time.

There is also this project, which uses Street View to geolocate an image. You could potentially take a photo with your mobile phone camera and the system could tell you where you were with accuracy similar to GPS. At present, this sort of thing is often done by crowd-sourcing rather than an automated system. The potential for automated systems has both potential benefits and serious privacy concerns.

Google itself applies some image recognition to Street View. The best known is identifying licence plates and faces, which are blurred for privacy reasons. However, it also reads house numbers and various street signs, and this information is used to improve Google Maps.

If Google were to add infrared to their Street View cameras, maybe it would make it easier to distinguish between faces of people who need privacy and faces of statues who need publicity.

Having infrared Street View has other uses and has been thought of already. 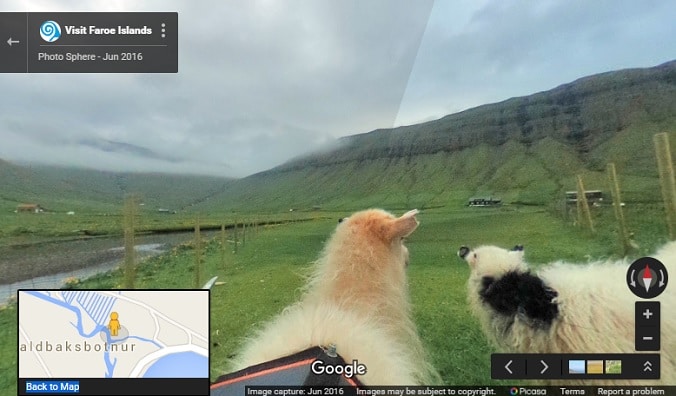