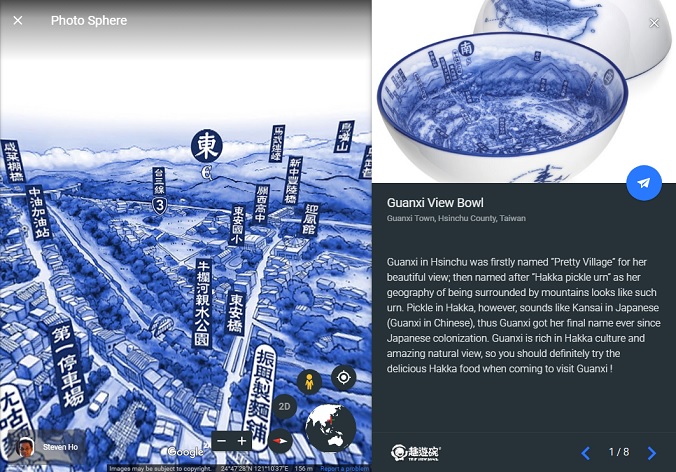 Steven Ho, whose work we often cover has recently updated a Google Earth animation he first created back in 2007 showing the Maokong Gondola of Taipei. We covered his original 2007 version in this post.

Below is a YouTube video of the tour, but we highly recommend also trying out the KML tour, which you can download from Steven’s blog.

It is excellent work and shows off some of the capabilities of Google Earth tours. It also highlights a few of the limitations. For example, it is not possible to stop and look around without pausing the animation, so you can only really see the animation from the angles provided in the tour.

A lot of work clearly went into getting it all right. There are 147 cable cars all moving correctly along their cables, which follow a long twisting route. He also notes that he does some tricks with the satellite imagery, switching between the default view and ‘historical imagery’. He does this because the default view shows a more uniform view from high altitudes, but actually has quite old imagery when you zoom in. Google has kept imagery from 2006 in the default layer because it is better quality than more recent imagery. However, the Maokong Gondola was opened in 2007, so for the closeup section of the tour, Steven switches to the more current imagery (from February 2016) found in ‘historical imagery’.

Here at GEB we have traditionally celebrated the new year with a Google Earth fireworks animation created by Steven Ho. This past new year we decided to expand on the idea by allowing you to create fireworks at the coordinates of your choice. This, in turn, has inspired Steven Ho to create a new animation to celebrate the Chinese Spring Festival, (also known as Chinese New Year or Lunar New Year).

His animation shows Chinese couplets falling from the sky, with the camera slowly rotating around the location you select – all set to music. Chinese couplets are a popular form of Chinese poetry that consists of a pair of lines of verse that match up in a number of different ways. You can learn a bit more about them on the Wikipedia page. They are popular for decorating doorways and also often used during celebrations, such as the Chinese Spring Festival. 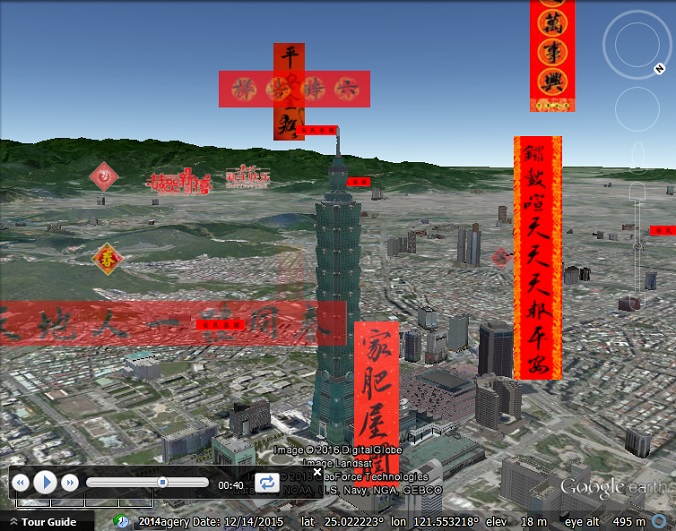 He has also created a similar animation for the Taiwan Lantern Festival, which shows lanterns flying up into the sky at night. 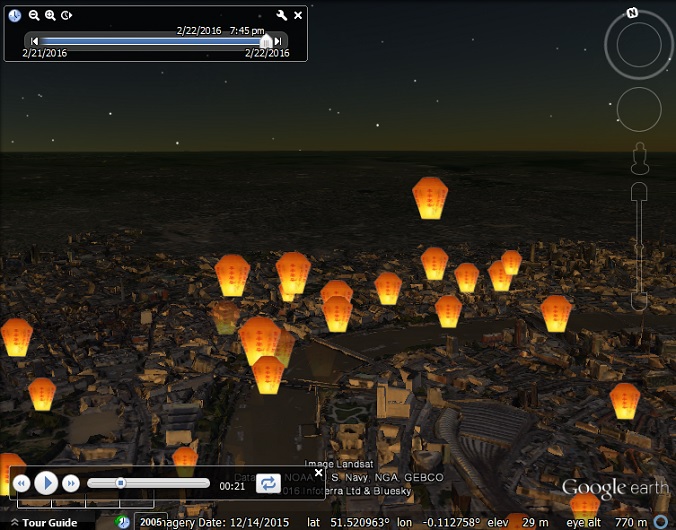 To see YouTube videos of both animations and create animations for the location of your choice, see the full post on Steven’s blog.

We have featured the work of Steven Ho a number of times in the past. He makes excellent Google Earth tours that really show off the capability of Google Earth’s Tour features. We have seen him do a variety of animations in Google Earth Tours, including the fireworks animation we show each New Year’s Eve, various marathons or running events, such as the tour of Scott Jurek running the Appalachian Trail and my personal favourite – Flying around with Blue Magpie Tea in Taiwan.

Today we are showing you his latest creation, which involves animating multiple paths at the same time, something he says he has not done before. Steven was inspired by this video created by the NCKU Mountaineering Association showing the routes of hikers that ascend a mountain in different groups and meet at the summit. The video shows an animation of the routes, made by overlaying an animation created separately and then overlaid on a static background image from Google Earth. Steven thought it would be much better to do it in Google Earth using its Tour feature. The result is these two Google Earth Tours:

An animation showing the groups’ routes to the summit of Mt. Xue

An animation outwards from the summit along the main ridges

. This second animation is not the route used by the hikers but was to further demonstrate the simultaneous multi-route animation concept.

Read more about it on Steven’s blog 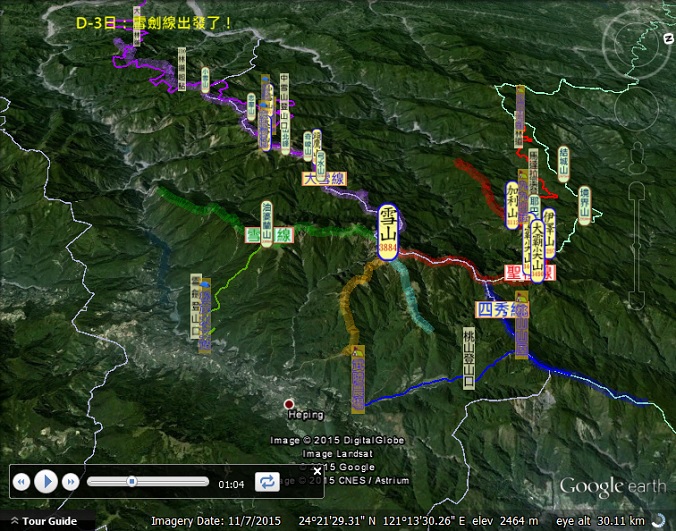