Steve Jobs undoubtedly had an effect on almost all of the technology that we use today. While he had relatively little impact on products like Google Earth (because Apple never created competing technology to help push things forward), his impact reached all of us.
That said, geospatial technologies can be used to help honor people in a unique way, such as the timeline of Louis Zamperini’s life.
Similarly, Google Maps Mania recently posted a timeline of Steve Jobs’ life. Steven Ho, who recently built the Trip View Bowl visualization, has built a nice tribute to Jobs in Google Earth. It turns Earth into a giant apple, with a silhouette of Jobs’ face on the side. 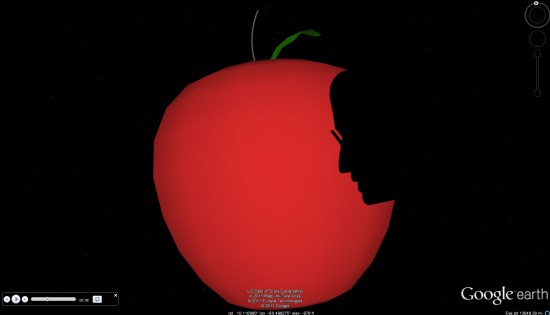 It’s easily one of the largest 3D models we’ve seen, similar to the pumpkin or the giant mustached smiley face we show you for movember each year. The giant apple is part of a short tour that he created, which also includes music and a quote about Steve.
To see it for yourself, you can view it with the Google Earth Plug-in, via this KMZ file

, or by watching the short video from Steven below: