A recent article by Mark Fillman of Ocean Cruises featured shipwrecks that then linked to various sites, but it only showed a handful of shipwrecks that can be found in Google Earth. There are far more than that can be seen in the MyReadingMapped’s five Google Maps of Sunken Ships, representing several hundreds of sunken ship sites, but only a fraction of those ships can be seen in Google Earth because some are above water, while others are below water. 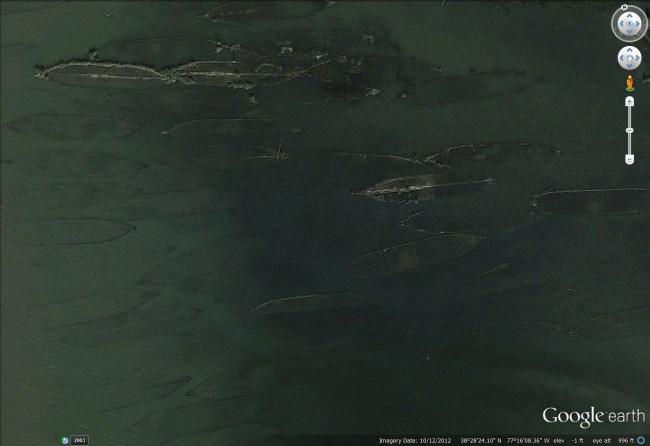 To help fill that gap, MyReadingMapped assembled 43 shipwreck images in a 4-part article of The Shipwrecks of Google Map, complete with links to each location. Those shipwrecks that can be seen underwater are in another article.

Many other visible ships are abandoned ships in ship grave yards, or musem(ed) ships. In any case there are hundreds of shipwrecks, abandoned ships, and museum(ed) ships that can be seen in Google Map and all these  links make it easy for ship enthusiasts to find them.

[UPDATE by Frank]: as commenter SpiderX22 mentions below, there’s an excellent collection of visible shipwrecks curated by the Google Earth Community since at least 2006 which I wrote about back then. It currently has nearly 2000 placemarks of visible shipwrecks around the world organized by several categories.

If you’re looking for more, you can also find a large collection of shipwrecks over at Google Earth Hacks.