Whenever we look at imagery update maps we notice certain patterns in the updates. One of the factors that causes these patterns is seasonality. We have long known that Google avoids snow cover in imagery where possible. This means that they largely avoid capturing imagery in winter in high latitudes. We thought it would be interesting to use the Google Earth API to see how strong an effect that was. The results were quite interesting and not what you might expect. 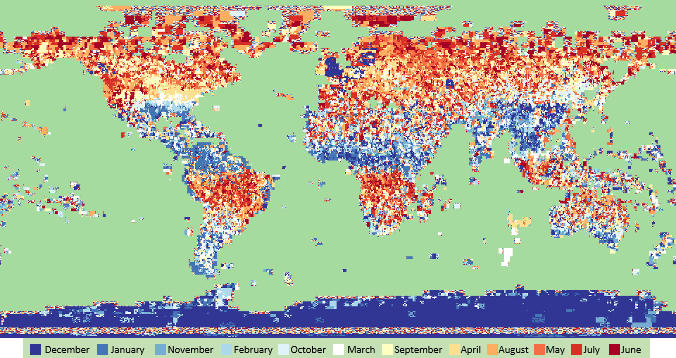 To see the map in Google Earth download this KML file

As initially expected, the far north and far south are dominated by imagery captured in the summer months of the respective regions. However, this trend does not hold throughout and there is a reversal in the tropics. This is because of cloud cover. In the tropics, cloud cover roughly follows the sun, with rain mostly occurring in the summer and clear skies occurring in the winter. There are exceptions, such as along the coasts, where rainfall patterns are affected by the ocean, and deserts where there is low cloud cover year round.

Overall, the patterns are quite distinctive and it is clear that when imagery updates occur is strongly affected by cloud cover and snow cover.

Notes:
A lot of aerial imagery in Google Earth does not have a specific date, but rather a date range. The start date is shown in the status bar and the end date on the ‘historical imagery’ timeline. Our map was using the end date. Some aerial imagery, especially the very old imagery, just has a year and this resulted in our algorithm seeing it as ‘December’. This is the reason for the United Kingdom and parts of Europe showing dark blue (December).

When there was more than one maximum, we picked one at random. This is not ideal, but was sufficient for showing general trends.