[UPDATE: It’s Christmas Eve! The santa tracker 2008 is now live!]
During 2005 and 2006, Google Earth was used by Google to help track Santa as he delivered presents around the world. This year, Google will be tracking Santa again in Google Earth. And, there is some other content for Santa you can view in Google Earth right now: 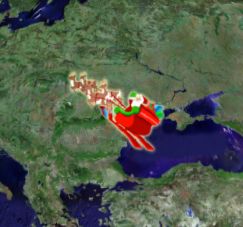 [EDIT: This was the 2005 Santa Tracker, for the 2008 Santa Tracker go here. You can also view Santa’s Route to see a rough approximation of where he travelled.]
Google has released their own Santa Tracker

for use with Google Earth. According to the announcement at the Google Earth Community the tracker will update every 10 seconds starting around 9:00 AM EST December 24th. The announcement was also made at the Google Blog.
Once you download the Santa Tracker above, you will follow Santa and his sleigh as he visits each town every 10 seconds or so. You can watch as he approaches your town and get the milk and cookies ready! I’m not sure what technology Google is using to follow Santa (GPS, Radar, or some Internet WIFI technology?), but perhaps they are linked into the Norad Santa Tracking system. Also, see this story about another GE file showing Santa’s route.