This year we will be running the same Google Earth Blog Santa tracker that we did last year. As we had last year, there are two versions, one using dynamic tours in Google Earth, which update by means of a network link and one that uses the Google Earth API. Instructions on how to use them can be found here.

We recommend the Google Earth API version if you have a compatible browser available, as it produces a better experience overall.

The Google Earth API is set to be shut down on January 11th, 2017 so this is in part a final farewell to it.

As has been the case for a number of years now, there are at least two other Santa Trackers run by Google and NORAD.

We have produced two versions of our Santa Tracker.

Santa is expected to take off on December 24th at 10am UTC. If you are not sure what time that is in your time zone you can use Google’s count down clock instead.

We recommend the Google Earth API version as it produces a better experience overall.

Google Earth API based version.
You will need a browser that is compatible with the Google Earth API. We have tested it on Firefox and believe that Safari should also work. Google Chrome no longer supports it. To begin, open the link above in a compatible browser. Firefox will ask you to ‘Activate Google Earth’ and then you have the option to ‘Allow’ or ‘Allow and Remember’. Select the latter option then refresh the page. It should now show you Santa’s Village in Google Earth. If Santa is already delivering presents then it will shortly fly you to Santa. Before and after Santa’s flight it will continue to circle Santa’s village.

At the bottom of the page you will see options to show Santa’s planned route, time markers to show roughly where he is expected to be at any given time (the figures show hours and minutes after the start of his journey), country borders and labels and a mini-map.

For a short video tutorial on the Google Earth API version see Frank’s video featured in this post.

You can also hide his planned route if you wish by deselecting it, and there is also a tour of Santa’s Village available. 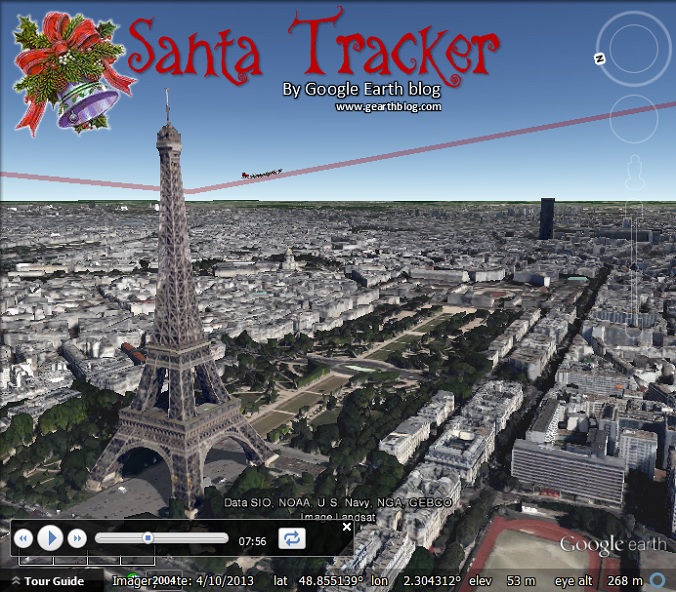 Santa as seen from the Eiffel Tower in Paris. In real life it will be close to midnight so the view will be quite different.

There are two other Santa Trackers this year, Google’s and NORAD’s. Google’s will be Google Maps based and NORAD’s will likely be based on the Cesium JavaScript library, as it was last year. Both Santa Trackers have countdowns. They differ by 2 hours, but last year NORAD’s countdown expired several hours before Santa actually took off. Our Santa Tracker will be as close as possible to Google’s Tracker, so you can take their count down as an indication as to when ours will start.

We will publish the necessary links and instructions to access them on Wednesday, but for now Frank has done an introductory video showing what it will look like:

We have decided not to accept user requests for extra Santa stops, but I am sure Santa has you on his list and you will not be missed out. His path shown in the tracker is only approximate.

We recently received some good news. We heard from Google’s Earth team that the Google Earth API will not be shut down on December 12th, 2015 as previously announced but will be kept running a bit longer. We have been told it should remain active at least until the end of the year. This is great news for those of us who utilize it for various tasks. It doesn’t significantly affect most web applications that have depended on it, as they will eventually still have to seek alternative solutions.

Please note that we are talking about the Google Earth API, which is a way to display Google Earth in the browser and control it using JavaScript. Google Earth, both the desktop and mobile applications, are not going to be shut down at any point in the near future.

For more on the history of tracking Santa see this post from last year. 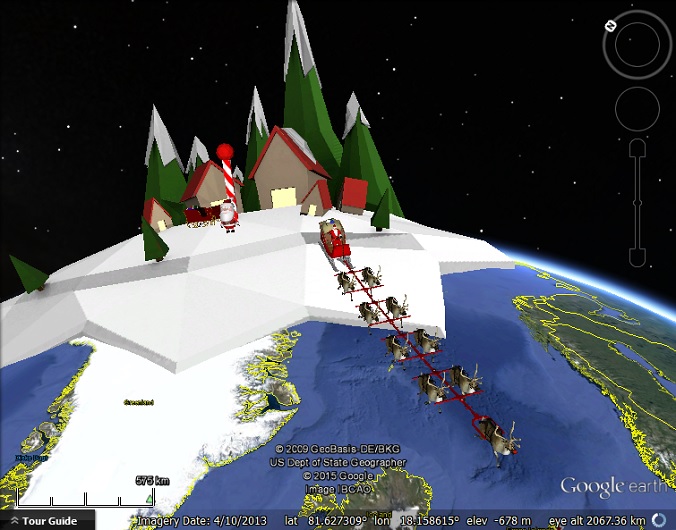 We will attempt to produce a Santa Tracker that will be available both via the Google Earth API and directly in Google Earth using network links.

On December 3rd we told you about the two Santa trackers that are available this year, and pointed out that there was a 3 hour difference between the two count downs. NORAD’s count down expired first, but for the 4 hours following (as of this writing), the NORAD Santa tracking website has simply said ‘Santa is preparing for launch!’.

[Update: Soon after posting, the NORAD tracker came online. It is implemented with the Cesium Web GL Virtual Globe using Bing maps. In the absence of a replacement from Google for the Google Earth plugin, we can expect to see more and more websites using Cesium as an alternative.]

Google’s Santa tracker went live 2 hours before midnight of New Year’s Eve at the international date line. It shows Santa leaving the North Pole and following the approximate path of the antimeridien South towards his first destination, which is Provideniya, Russia. He will arrive there just after 9pm Christmas Eve local time. Santa’s gift deliveries must be estimated, as it shows Santa delivering thousands of gifts whilst still flying over the polar ice cap and if you want a more personalized gift for your friends check the fruit baskets, or the wine baskets !!

As far as we know, there is no way to view either tracker in Google Earth, which is a pity, as that is the ideal platform for it. Google Earth is largely responsible for the popularity that the Santa Tracker currently enjoys.