Yesterday we had a look at some very large scientific instruments that can be seen in Google Earth. Today we are looking at telescopes. Optical telescopes come in sizes up to 10m in diameter, which is very large for an optical telescope, but not very large from the point of view of satellite imagery. Radio telescopes on the other hand, can be a lot larger.

The largest single dish radio telescope is the Arecibo Observatory in Puerto Rico with a diameter of 305 m. 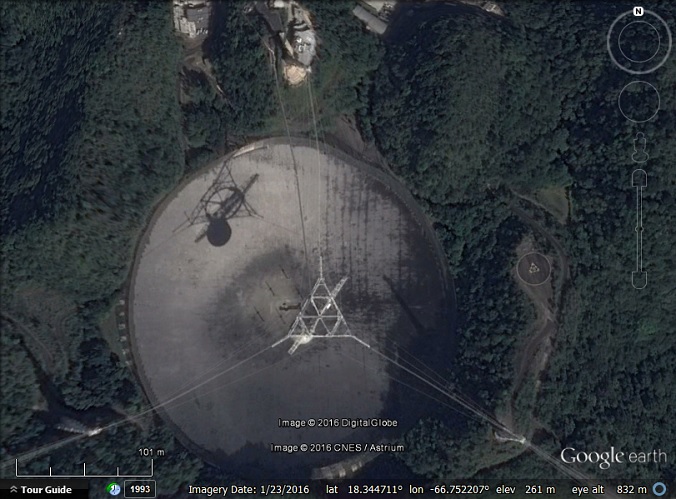 China is building an even larger dish, the Five-hundred-meter Aperture Spherical Telescope (FAST) which, as the name suggests, will have a diameter of 500 m. 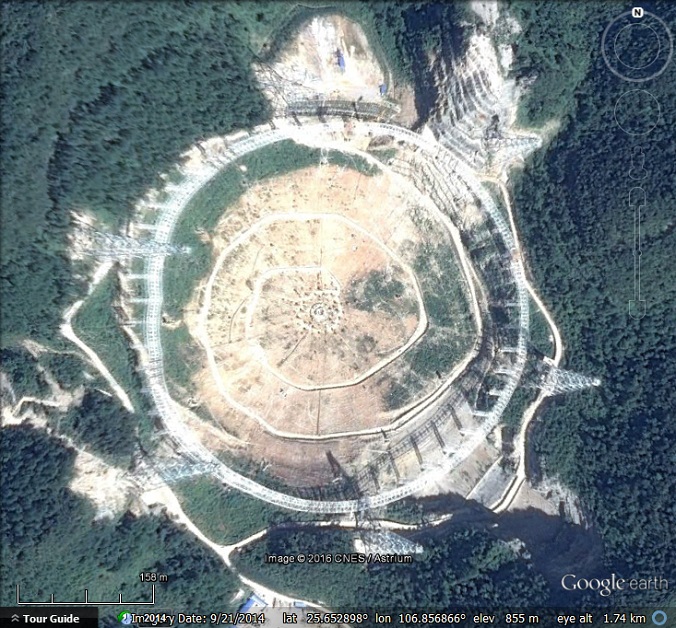 Large, movable dishes are also common. Below is the Effelsberg 100-m Radio Telescope. 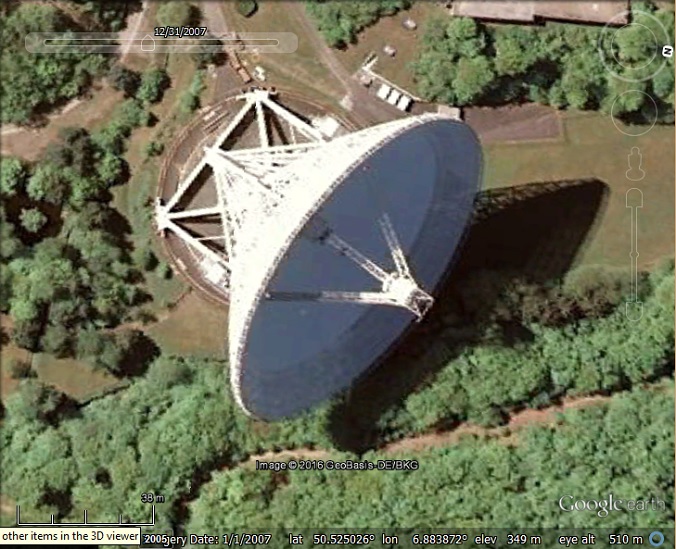 Radio telescope arrays consist of a number of dishes spread out over a large area.

We start with the Giant Metrewave Radio Telescope in India. It consists of 30 separate dishes arranged in a ‘Y’ shape. Below we see the cluster of dishes at the centre of the ‘Y’. 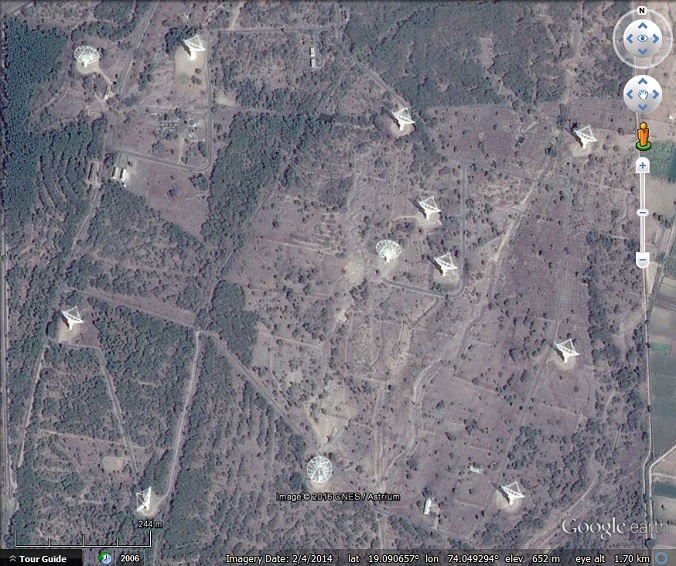 Some of the dishes of the Giant Metrewave Radio Telescope

To see the whole ‘Y’ shape we have to zoom out to where the individual dishes are no-longer visible, so we have marked them with placemarks. It measures approximately 25 km between tips. 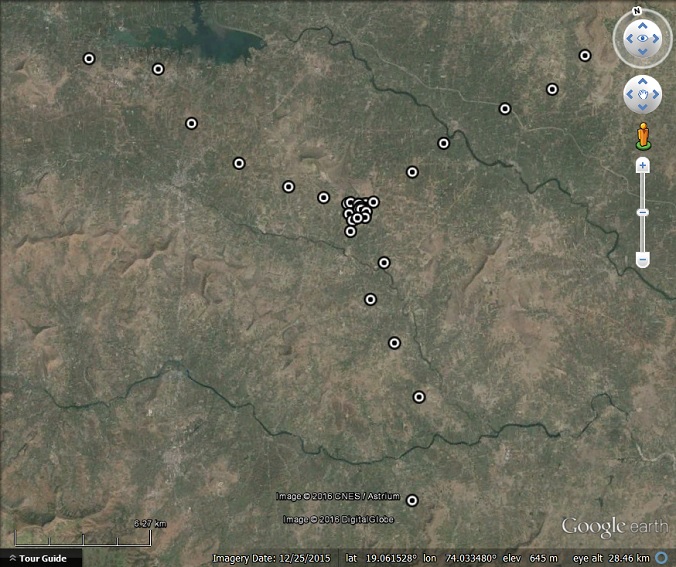 The layout of the Giant Metrewave Radio Telescope.

Next is the Karl G. Jansky Very Large Array (VLA), New Mexico. It is also in a ‘Y’ shape and has longer arms than the Giant Metrewave Radio Telescope above. Each arm has a railway line and the dishes can be moved along the arms to focus on different frequency ranges. Below you can see all the dishes have been brought to the centre. Be sure to check the historical imagery to see the dishes spread out all the way to the ends of the arms. 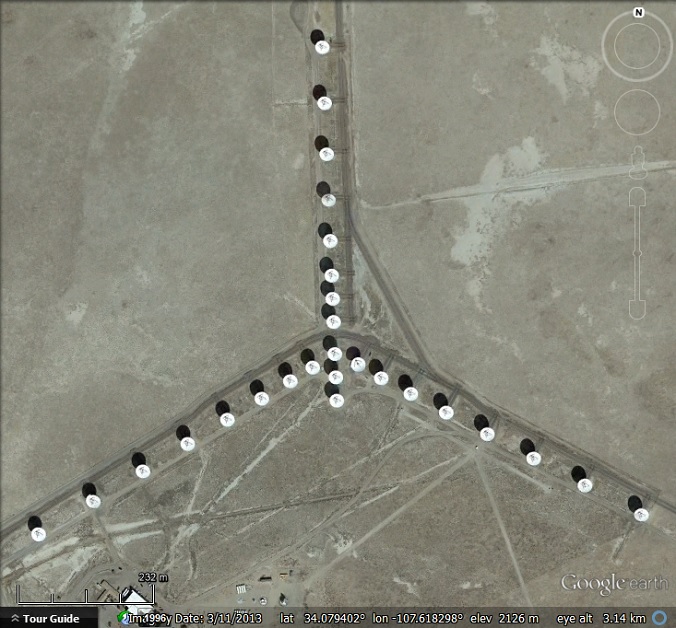 The Square Kilometre Array stretches all the way from South Africa to Australia. The name refers to the total area of all the dishes in both countries once it is completed (one square kilometre). Below we see part of the South African site known as MeerKAT imaged in 2013. We could not find any actual dishes at MeerKAT but the foundations for dishes have been constructed. The image only shows the central part, so be sure to explore the site further in Google Earth. We have also identified the Australian site, which does have a lot of visible dishes that we have marked in the KML at the end of this post. 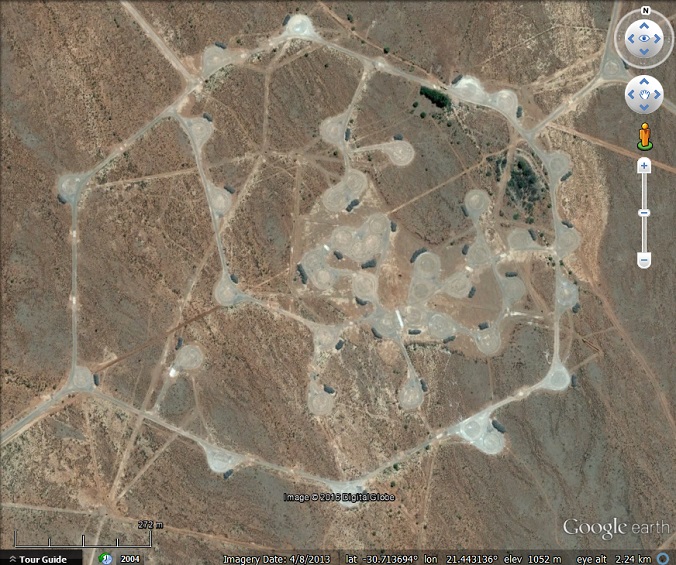 The Siberian Solar Radio Telescope consists of 256 dishes arranged in a cross: 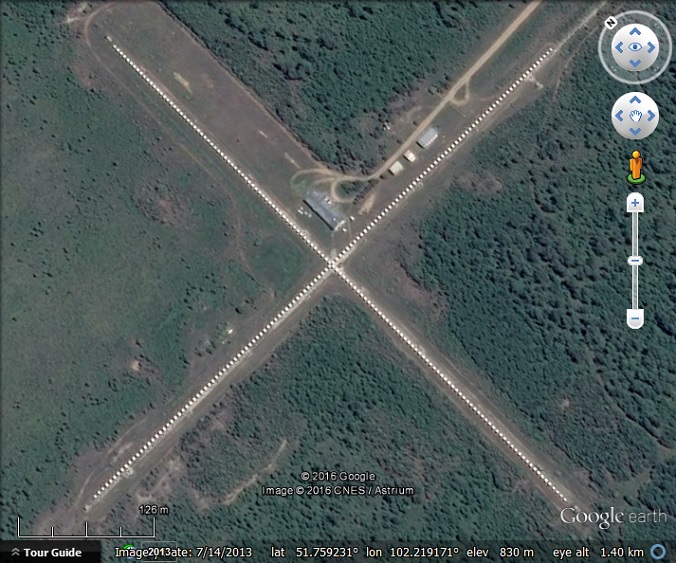 Not all radio telescopes are dishes. There are a variety of other patterns, such as the Precision Array for Probing the Epoch of Reionization, which is located near the MeerKAT site in South Africa. 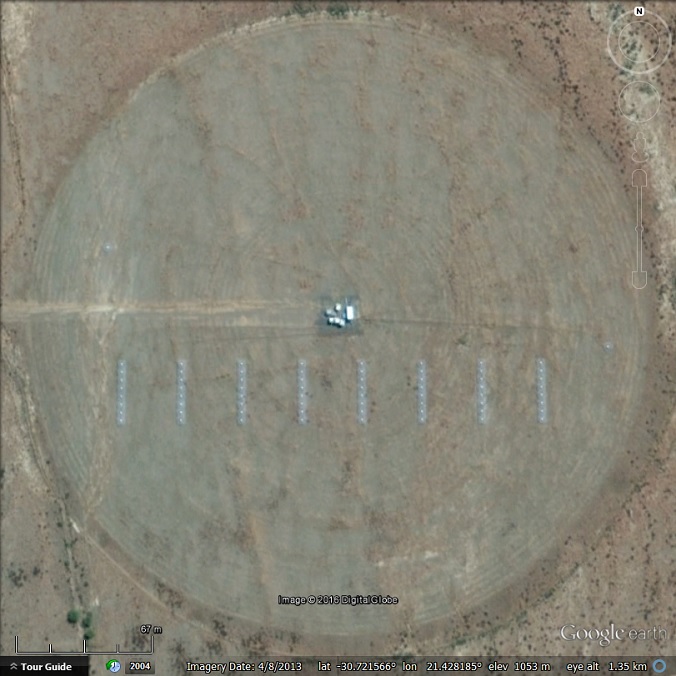 Precision Array for Probing the Epoch of Reionization, South Africa

The Low-Frequency Array for Radio astronomy (LOFAR) in the Netherlands has an interesting pattern. Below we see the central circle, but it extends quite a way outwards in an interesting pattern with sets of three dots. It can only be seen in ‘historical imagery’ because the default imagery is from 2005 before it was built. 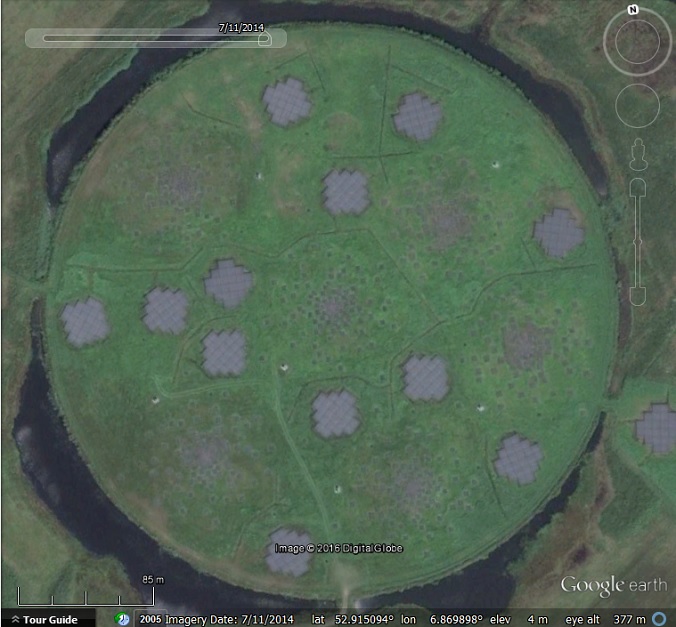 Another interesting design is the Nançay radio telescope in France.

To see the above locations, as well as a variety of other Radio Telescopes in Google Earth download this KML file