A few days ago, Hurricane Paula was bearing down on Honduras and Mexico. While it caused some substantial flooding and destroyed some homes, it weakened rather quickly and is now a tropical storm near Cuba.

However, three days ago as the storm was battering the coast of Honduras, NASA’s MODIS captured a stunning image of the hurricane. 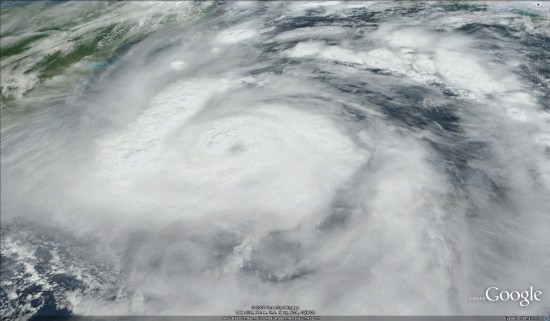 Here is what NASA said about the image:

The Moderate Resolution Imaging Spectroradiometer (MODIS) on NASA’s Terra satellite captured this natural-color image of Hurricane Paula at 11:20 a.m. CDT (16:20 UTC) on October 12 while over the Caribbean Sea, just off the coasts of Mexico, Belize, and Honduras. Coiled around a distinct eye, the storm’s most intense clouds spanned roughly 200 kilometers (125 miles).

From their Earth Observatory “Image of the day”, you can download the image as a 6MB JPEG, or view it in Google Earth as an image overlay with this KMZ file

The Image of the Day site showcases some amazing images. We’ve shown you some of them on here in the past, such as the Tempe Town Lake Drain and a cool series of images that showed the growth of Las Vegas from 1984-2009. I strongly suggest visiting the site from time to time to see what kind of great stuff they’re putting out.