Google added a number of new 3D areas over the weekend, amongst which was Niagara Falls, which lies on the border of Ontario, Canada and New York State, USA. For a list of other newly discovered 3D areas, check the comments at the end of this post or download our KML file, keeping in mind that it takes us a day or two to get new locations into the KML. Also of note in the new finds are Zagreb, Croatia (a new country, and capital city) and Prague, Czech Republic (a capital city).

Although Niagara Falls does have the old type of 3D model which includes an impressive spray effect and a rainbow, we feel the new imagery gives a much better overall effect as the whole region is modelled and the colours match well. You can still view the old model if you wish by switching to ‘historical imagery’. 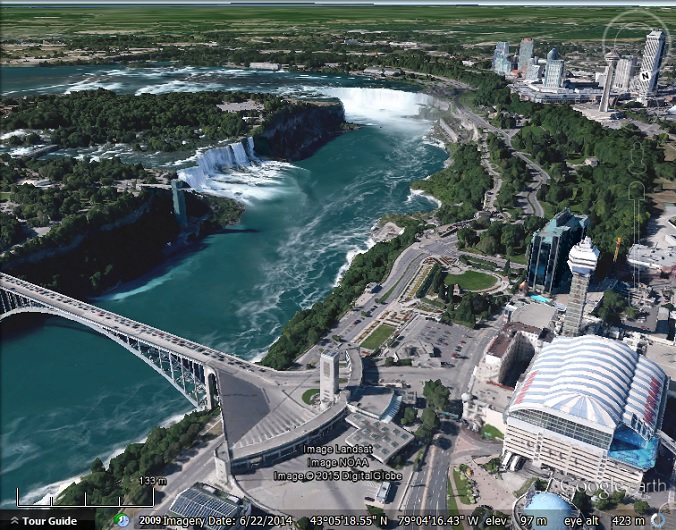 Google’s automatically generated 3D imagery usually does very poorly with moving objects such as aircraft, cars, and water. Google has clearly had to manually touch up the model as it usually does for bridges and some buildings. If you get too close the edge of the Horseshoe Falls looks a bit too angular and the trees on the islands are not in 3D. The rapids above the American Falls have some major flaws in the 3D if you look up close. However, if you don’t get too close, the overall quality of the imagery is impressive and worth having a look at.

We believe the 3D imagery was captured prior to May 2013.