We have in the past shown you how to move Google Earth’s ‘My Places’ from one computer to another. However, if you regularly use Google Earth on more than one computer, it can be useful to sync your ‘My Places’ between the computers. By utilizing a cloud based synchronization service this is now relatively easy to do.

Before trying any of this, remember that modifying the registry incorrectly can cause serious problems that may require you to reinstall Windows. Also, if you have any important placemarks in your ‘My Places’, be sure to back it up first.

The first step is to decide which cloud service to use. We used Microsoft’s One Drive but you can also use others such as Google Drive, Drop Box or iCloud depending on what operating systems your computers have and what your personal preferences are. Ideally, the service you choose should automatically sync a particular folder between your computers.

Instructions for Windows:
Decide which computer has the placemarks you wish to start off with. Google Earth stores your ‘My Places’ as a KML file called ‘myplaces.kml’ typically located in the folder:

Once you have located your ‘myplaces.kml’ file, copy it to a location in your cloud services shared folders and take note of the full path of the folder.
Change the location that Google Earth loads the file from by editing the following registry key and updating it to reflect the new location of the file:

or in Google Earth Pro

On the other computer, just update the registry key without copying the ‘myplaces.kml’ file. If you wish to combine the two ‘My Places’ then you can open your old ‘myplaces.kml’ from the second computer later on in Google Earth and copy the places into your new ‘My Places’. 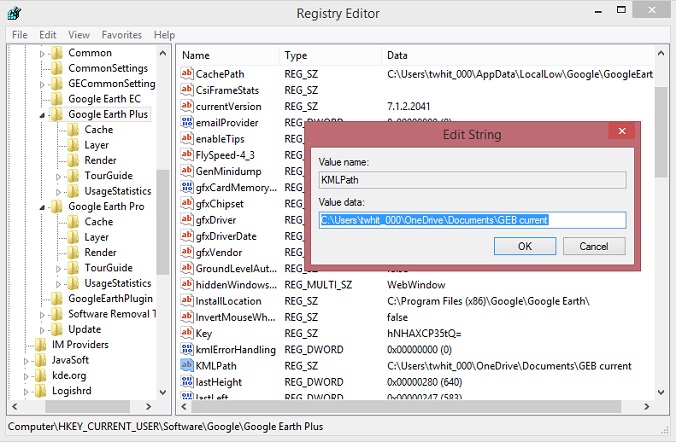 Setting the KMLPath in the Windows Registry.

For Mac or Linux?
We do not have a Mac or Linux machine to experiment with, but we did find this thread on Google Groups that suggests using symbolic links. Have any of our readers tried this? If you try this, be careful not to include the Google Earth cache, as that is typically quite large (up to 2Gb) and you don’t want that to be synced.

Notes:
We found with Microsoft’s One Drive that it was necessary to ensure that the ‘myplaces.kml’ was set to be ‘available offline’ on both computers, but other than that we have not experienced any problems with the set up.

You should avoid using Google Earth at the same time on both computers, and allow time for the file to sync before switching computers. The ‘myplaces.kml’ file is read once when you open Google Earth, and then saved when you exit.

To do this, right-click on the “My Places” text in your sidebar, then choose “Save Place As”, as seen here: 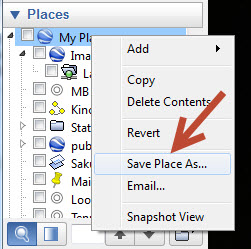 Choose somewhere to save the file.  This can be just on your desktop, onto a USB drive, or into a system such as Dropbox or Google Drive.  One way or another you need to save the file and have a way to transfer it to the new computer.

Step Two: Transfer that KMZ file to your other computer.

If the file is small enough you might be able to email it.  Otherwise you can save it on a USB drive, save it in Dropbox or Google Drive, perhaps burn it to a CD.  However you want to do it, you need to move it to the other computer.

Step Three: Open the file on the other computer.

We’re still hopeful that Google will eventually have a way for us to easily keep those “places” synced to the cloud.  There are workarounds to make it sync with Dropbox for those that are tech-savvy, but I expect will see a built-in solution at some point in the future.