Back in 2010 Japanese GPS artist Yassan (also known as Yasushi Takahashi) wrote the world’s largest marriage proposal by travelling around Japan while recording his GPS track. He holds the Guinness World Record for ‘Largest GPS drawing by an individual’. We have, however, previously looked at the work of Nick Newcomen, whose GPS writing was even bigger.

Now, with the help of Japan Airlines Yassan has out done himself and Nick Newcomen by using GPS tracks to literally write the word ‘PEACE’ on the Earth.

For more of Yassan’s GPS artwork see his website.

We were not able to find a source of Yassan’s work in KML format, but Nick Newcomen’s can be found here

Yesterday we looked at some large art pieces by Jorge Rodriguez-Gerada.

Thank you to GEB reader Ryen McPherson for letting us know about a recent Graffiti project on an abandoned airstrip in the Mojave Desert, California, USA. The piece is by a group called ‘Indecline.’ It is not yet visible in Google Earth imagery, but Ryen kindly sent us some aerial photos, which we have put into this KML

so you can view them in Google Earth.

If you are wondering what the message means, here is an explanation from ‘Indecline’:

When Woody Guthrie penned “This Land is Our Land” in February of Nineteen Forty, the frontier still felt freshly settled and, despite the recent Depression, there was still a prevailing sense of national optimism. Which led us right into the Second Great War, the Atomic Bomb, the Cold War, national paranoia and Red-baiting, the eventual rise of the Corporate State in patriotic opposition to Communism, and finally, as a result of rampant overconsumption, our latest existential crisis of species: Global Warming. We thought, in lieu of all this, that Woody might be due for an update, so we found a decommissioned 3000-by-65-foot runway from an old World War II bomb-testing site, got together a few of our buddies, and made a monument to our rather precarious times.

This Land Was Our Land—both literally, in the sense that acres of remote desert were used up and discarded by our government in order to improve our ability to drop bombs on people in far off lands (who constitute a threat just because they peddle a different set of ideals than us;) and also figuratively, as in we as a species are presently embroiled in the constantly accelerating process of using up and discarding this planet as a whole.

It was ours, and it easily could be ours again. The only thing that needs to change is that we take responsibility for it.

Ryen has said that it is the largest graffiti mural in the world and we believe he is correct. There are larger examples of writing such as the word ‘LUECKE’ written in trees which has been called graffiti, and there was the ‘Steph loves you’ message written in tire tracks, but neither qualifies as a mural. The Guinness Book of Records lists the longest graffiti scroll as ‘Rehlatna’ and at 2.2km it is over twice the length of ‘This Land Was Our Land’. However, ‘Rehlatna’ was not a single mural but rather a continuous wall with many murals along its length. The wall of the ‘Rehlatna’ mural is visible in Google Earth, but you cannot see the murals on it. Find it with this KML file

As part of an advertising campaign for the Hyundai Genesis, Hyundai have used the cars to write a message from a girl called Stephanie to her father who works on the International Space Station.

The message was created on January 18th, 2015 and holds the Guinness World Record for the largest tire track image. The image is not yet in Google Earth, so we have created an image overlay

based on a screen shot from the YouTube video.

We had a look at the location in the Landsat imagery, but the sand is so bright it is not possible to see whether the writing is still there. Let’s hope DigitalGlobe or another satellite imagery provider got a good image and we see it in Google Earth eventually.

It is not the largest artwork ever made with tracks in sand. That title, we believe, is held by Jim Denevan, whose Black Rock Desert piece we have looked at before. He apparently used a roll of chain fencing pulled around by a truck. Also featured in that post is the Mundi Man or Eldee Man by Ando, drawn in Australia using a tractor, but it is quite a bit smaller than the Hundai message. The Nazca Lines of Peru are much older and were created by removing reddish pebbles from the surface exposing the lighter ground underneath.

You can see some of his work here and watch a YouTube video about him below:

Yassan is not the only person to think of writing with GPS tracks. Nick Newcomen created some even bigger writing by this method, which we looked at in 2010.

Here is a pretty funny story — Nick Newcomen apparently had some free time on his hands, so he drove 12,238 across 30 states with a GPS logger to “write” a message for all to see: 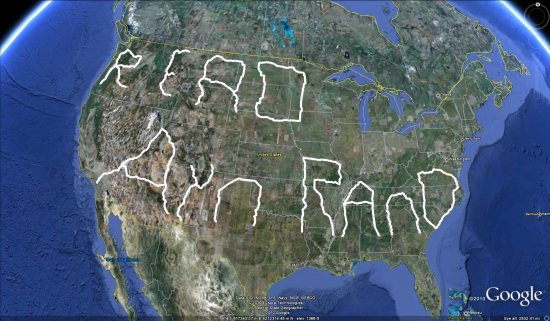 You can read the full story over on Gizmodo, but it appears that Nick was a pretty big Ayn Rand fan.
To see it for yourself, you can view it on his site