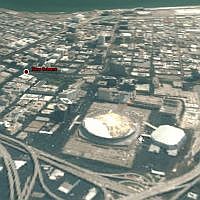 These are some of the first of what I assume will be many image overlays showing the terrible damage done to the Hurricane Katrina ravaged areas. This is an overlay

of one of the new Digital Globe images taken recently showing the flooding and damage in New Orleans. The overlay was posted here at the Google Earth Forums. NOTE: these are photos being placed by users of Google Earth, but are placed in the proper coordinates. They are not officially part of the Google Earth database.

Here are some horrifying overlays

from Bay Louis, MS from another post here. Turn on the different photos in the Places sidebar – it will take a while to load each of these images (even longer if their server gets overloaded). These high resolution pictures show awful paths of destruction through this area of Mississippi. It’s like a hundred tornados came though here.

The satellite imagery firm Digital Globe, which supplies much of the satellite data in Google Earth, has announced that they are working to bring updated imagery of the areas devastated by Hurricane Katrina. From the announcement:

DigitalGlobe, Google and GlobeXplorer (www.globexplorer.com) are working closely to provide the updated imagery via Google Maps, Google Earth, and the GlobeXplorer suite of products including ImageAtlas as quickly as is possible.

As soon as this data is made available, I will post an announcement here at Google Earth Blog.
See this entry for a video of the demolished region tied to placemarks in Google Earth.

The devastation left behind Hurricane Katrina is awful. ‘johnmora’ of Nashville, TN watched a helicopter video from the website of WLBT of Jackson, MS and created placemarks for showing the Google Earth locations for various shots of complete destruction shown in the video (based on timestamp). Here is his post at the Google Earth BBS.
You should go to the WLBT website and select the video titled: “Mississippi Gulf Coast Damage from Skycopter 3“. If you are viewing the video with Windows Media Player look to the lower right for the current time stamp, or when using the slider to go to a particular part of the video. You can load John’s placemarks here

. Then match the time stamp to the placemarks John created.
If you haven’t seen much of the video of the damage, this is one video you should watch. These placemarks help you see what it was like before these beautiful places were demolished. 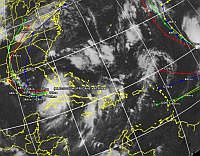 Hurricane Katrina has just passed through Florida and is gaining strength in the Gulf of Mexico. This is a good time to talk about another weather resource for following Tropical storms in the Atlantic.
In a timely post back in late July, Paul Seabury (the same guy who posted the excellent resource showing All Hurricanes Since 1851 I wrote about earlier) has compiled a network link that automatically presents the current forecasts models, sea surface temperatures, satellite pictures, and other data for all current Atlantic tropical storms. You can download it here

.
This is such a convenient tool, I’ve made it a permanent part of my Places folder. Make sure you explore the various sub-folders which contain things like SST (Sea Surface Temperatures in various formats), and Satellite Images. Excellent work again Paul!