Google has updated the ‘Latest Google Earth Imagery’ map, showing an update on December 17th. Thank you to GEB reader ‘AC’ for letting us know. 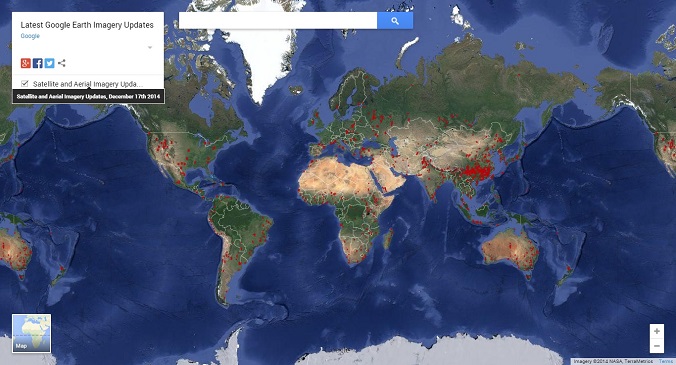 As is traditional at this time of year, let us look back at previous updates and see how Google is doing. Google provides a handy map of imagery updates from 2009 to 2014, although it does not currently include November and December this year. But even without including the large update on November 8th, it is clear that 2014 has been the best year yet for imagery updates. 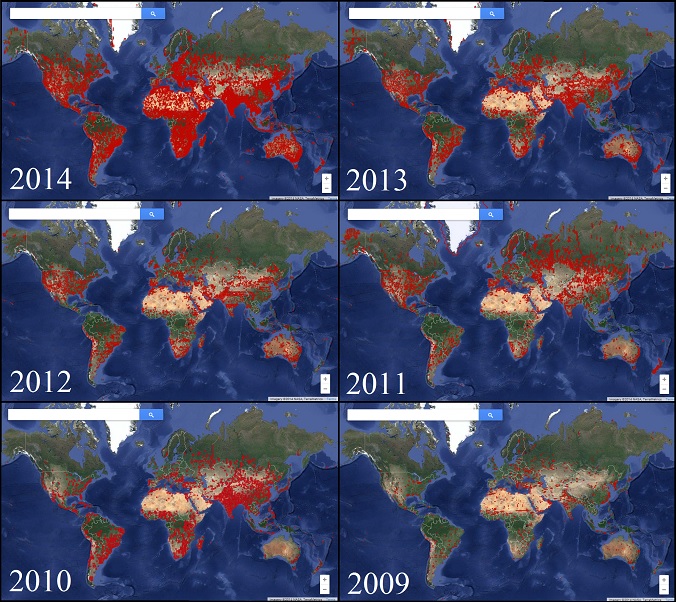 Google have updated their ‘Latest Google Earth Imagery’ map showing an update on December 9th. Thank you to GEB reader André for letting us know. 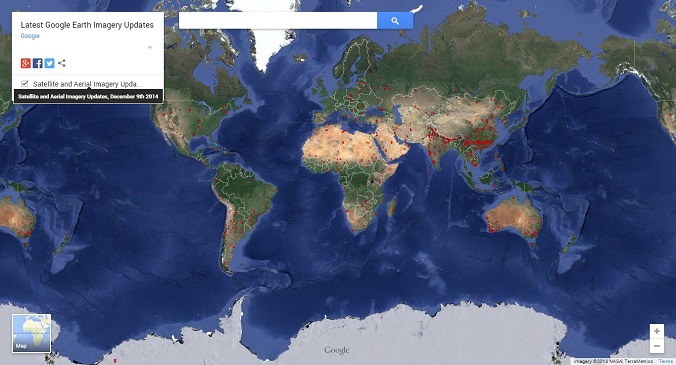 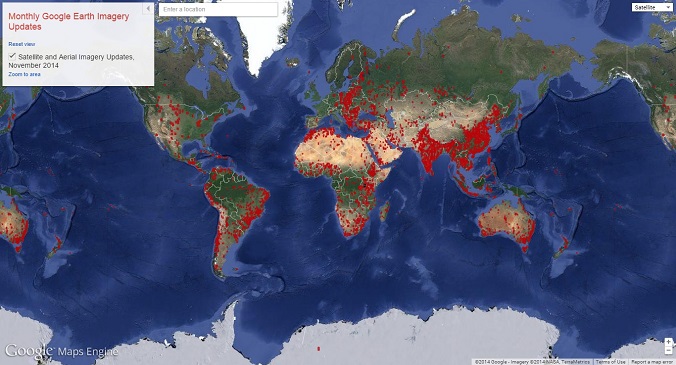 And for updates prior to that, you can use Google’s ‘Historical Google Earth Imagery Updates, 2009 – 2014’ map which includes all updates to October 2014.

In our month end post we mentioned that GEB reader ‘munden’ had found updated imagery. Thanks also to GEB readers ‘Mapmaker’, Frank, Georg, and Sladys for letting us know about additional areas in the comments and via email. Now, Google have updated their ‘latest Google Earth Imagery’ map, showing the date 3rd November 2014. However, the aforementioned areas are not part of this current update, so it seems that once again Google have skipped telling us about an update.

I found out about the current update because I got an email from Google’s Follow Your World app that lets you monitor locations you are interested in and my home town of Livingstone, Zambia, was part of the update.

[Update: Thank you to GEB reader Maarten for letting us know that there was an update that we missed for October 21st, 2014 and for sending us a screen shot as seen below. ] 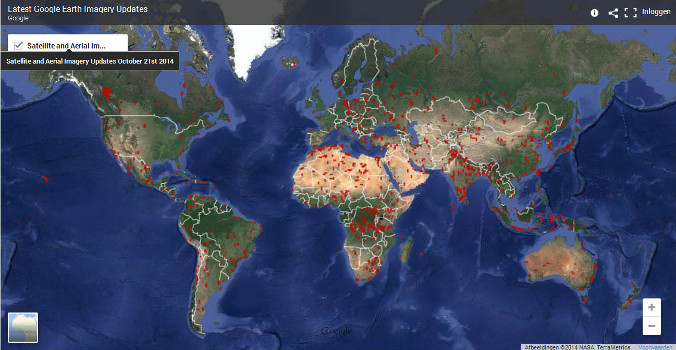 Thank you to GEB readers André, Martin and Maarten for letting us know that Google did an imagery update on 4th October, 2014. 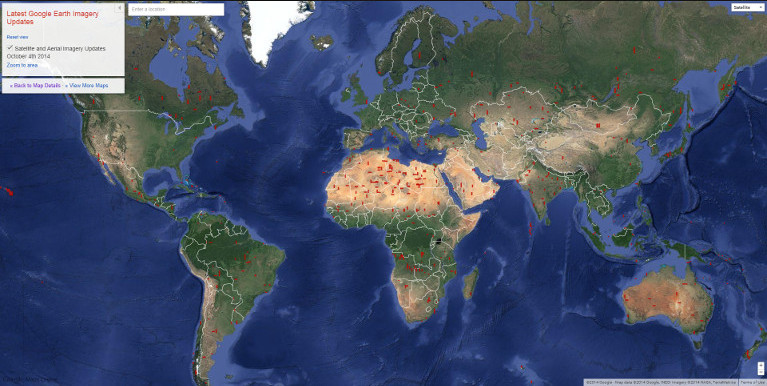 Google has this map on the Maps Gallery that shows the latest imagery updates. However, there is no way to save it other than via a screen shot. The map is updated after Google releases new Imagery. Until yesterday, it showed the last imagery update that we reported on which was on the 26th of August.

However there is another map here which purports to show updates for the whole month rather than just the most recent date. Strangely, it also only showed the month of August 2014 until yesterday, but now it shows September 2014. When it showed August 2014, it appeared to correctly show a combination of the August 13th and August 26th Updates. So were there updates in September that were never shown on the normal updates map? 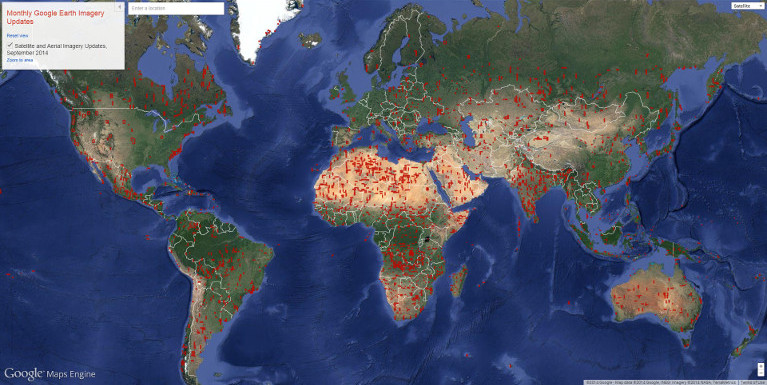 Imagery updates for the Month of September 2014 ? – Larger version.

We told you a couple of weeks ago about an imagery update on August 5th. Since then, Google has done at least two more updates, on August 13th and August 26th. Thanks to GEB readers André and ‘Munden’ for alerting us.

Google has updated their map and the second one was a particularly large update. As of this writing, the last update is in Google Maps but not yet in Google Earth.

Oddly enough, there doesn’t seem to be any way to permanently save the KML for the map so the only record I have of the August 13th update is a screen shot (top image above).

It is possible, from the Maps Gallery page, to download a KML. However, it contains a special type of network link proprietary to Google which displays the KML in ‘Layers’ rather than ‘My Places’, which is where KMLs loaded into Google Earth normally appear. Also, it doesn’t work in older versions of Google Earth. Most importantly, it does not remain across sessions and there appears to be no way to save it. Furthermore, being a network link, even if you save the downloaded KML, when Google updates the map, what you see is the newest map and you can no-longer view the old map. I am guessing that the purpose of this special type of network link is to allow Google Earth Enterprise customers to enable their users to view their maps without allowing them to copy all the data as KML.

Another interesting aspect of this update is some patches of imagery off the west coast of Australia in the region of the search area for Flight MH370. Google Maps does not show imagery in the oceans by any mechanism that I know of. Google Earth does show imagery in the oceans if you turn on ‘Historical Imagery’, but since the update is not yet in Google Earth, there is currently no way to view this imagery!