In yesterday’s post we mentioned that Google has stopped producing imagery update maps for every update. It turns out we were wrong. Thank you to GEB reader Munden for letting us know that Google has released a map for an update on April 24th, 2015. You can view it in Google Earth using this KML file. Keep in mind that Google uses the same map for each update so in future you may see a more recent update than the one discussed in this post. There is no way that we know of of saving the map other than a screen shot. 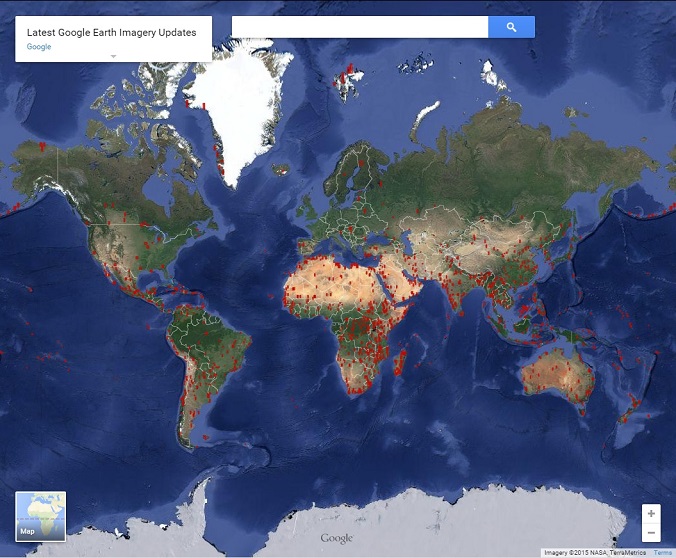 Do not assume that all the added imagery is recent. For example, there is a patch of aerial imagery in Spain that is dated 15th June 2013. For more on what the map is telling us, see this series of posts we wrote last month.

This update includes imagery of some of the Islands of Vanuatu captured soon after it was hit by Cyclone Pam in March. 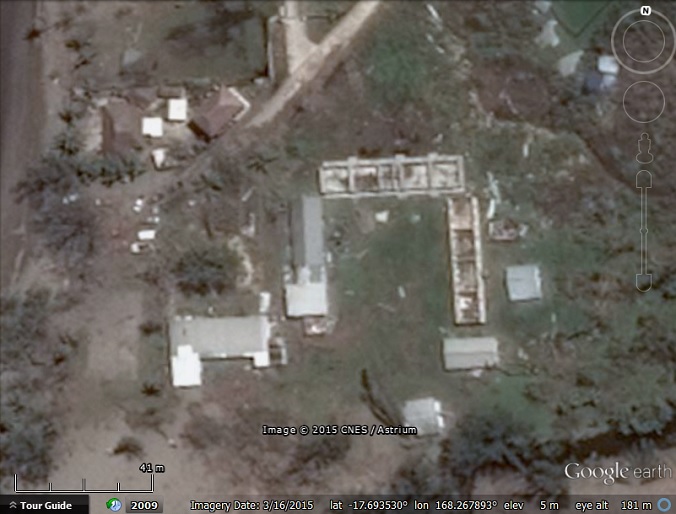 Some buildings have lost their roofs.

If you wish to explore the area, be sure to check ‘historical imagery’ and also check outside the red outlines, as there are other relevant images of the cyclone damage from previous updates.

If you find anything interesting in the imagery, do let us know in the comments.

Google has updated its Imagery Update map to show March 2015. Thank you to GEB reader Sladys for letting us know. As before, you can view it in Google Earth using this KML file

It is the same map that was used for the February updates so the February map is no longer available. Due to the way Maps Engine uses a proprietary network link, it is not possible to save the data shown on the maps as a KML. The only way we know of to keep a record is via a screen shot. We hope Google will update its Historical Imagery Updates map, which as of this writing still only shows up to October 2014. 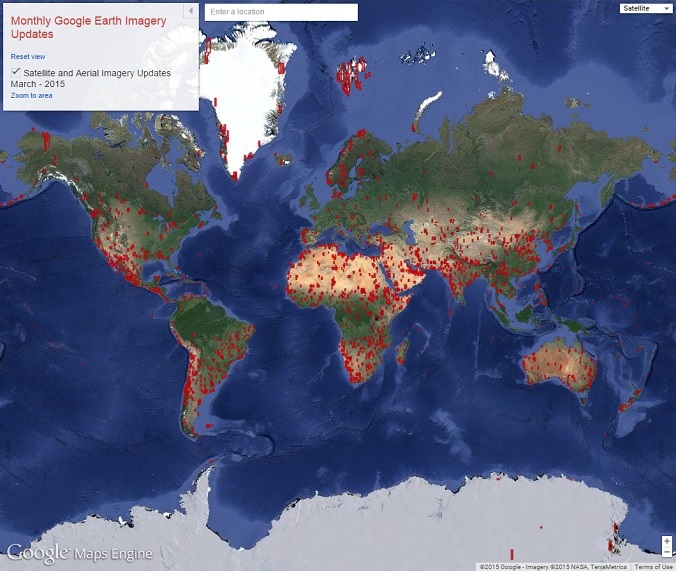 Note that some of the imagery has not yet been put into ‘historical imagery’ and if it isn’t being added to the default layer, it may not be visible at all.

Our favourite find so far is Concordia Research Station in Antarctica: 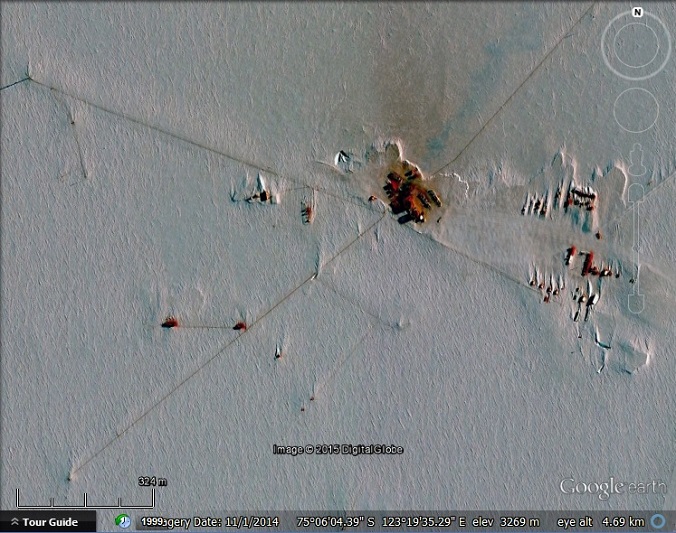 Google has finally produced an Imagery Update map for February 2015. Until now, the most recent map showed the December 17th, 2014 update although we had noticed a large quantity of new imagery since then.

The map does not seem to be available on the Google Maps Gallery, so we only knew about it because Google shared a link to it on its Google+ page. To view the map in Google Earth, use this KML file 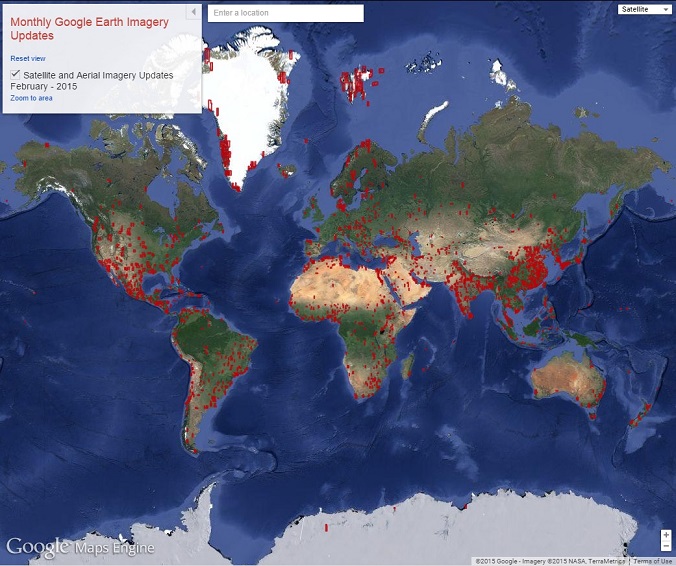 A similar map exists for December 2014. Do any of our readers know if one exists for January 2015? If so, please let us know in the comments.

Google also recently updated their 3D imagery map, showing the most recent additions – which helped us find a few locations we had not yet spotted.

Google has not updated its imagery updates map since December 17th last year. It has, nevertheless been pushing out satellite imagery at a fairly rapid pace. We can only speculate as to why it is not updating the maps. Perhaps its staff have been too busy with all the reorganization that seems to be going on at Google. Or perhaps the maps are hosted on Google Maps Engine, which has recently been deprecated.

This post is an appeal to Google to resume releasing its imagery updates maps. If the updates are now too frequent to do a map for each update, then a cumulative map once a month would be much appreciated.

Quite a lot of people enjoy looking through new imagery to see what can be found, and the imagery update maps make it a lot easier. A few sharp-eyed GEB readers manage to find new imagery, either by the date or by comparing Google Maps to Google Earth or to historical imagery, as the various systems tend to get updated in a staggered fashion. However, the updates are so numerous that it is not really worth trying to find them all and list them here.

Occasionally GEB readers let us know about interesting finds, such as the Costa Concordia we showed you in January. And thank you to GEB reader ‘Munden’ who recently let us know about a brush fire he spotted in new imagery in the south of Mississippi. The only copyright notice for the location is Google’s, and based on the high resolution, the imagery is likely aerial imagery. So is Google now capturing its own aerial imagery? 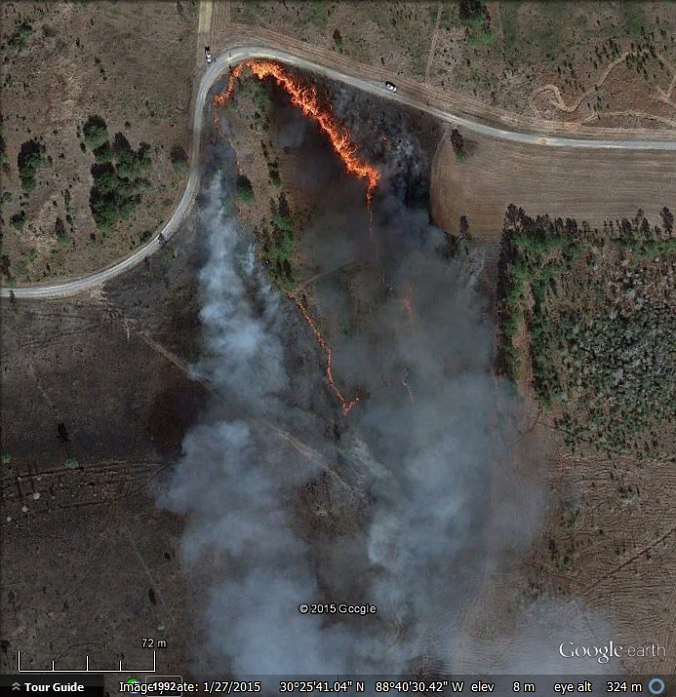 A brush fire in Mississippi. To view in Google Earth use this KML file

Here in Cape Town, with some help from Frank, we were able to identify the Tahina docked in Simon’s Town on January 17th, 2015. 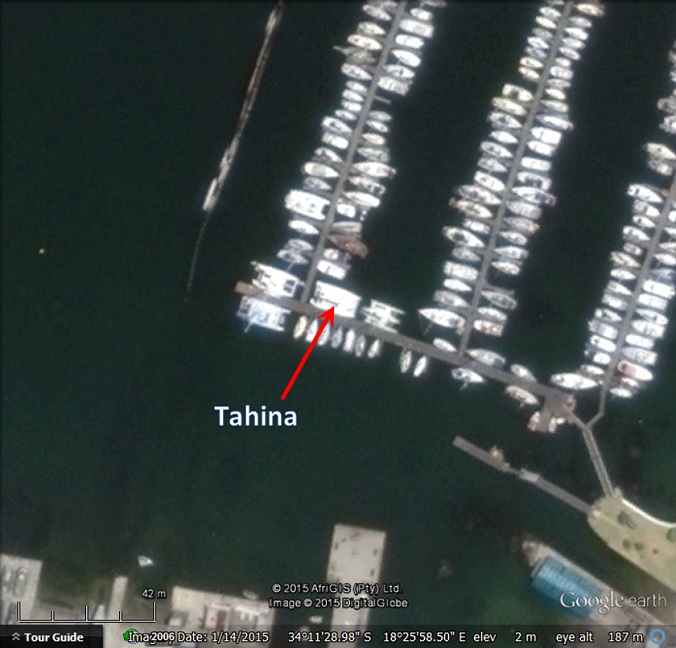 To view in Google Earth use this KML file.

Although Google have not updated their ‘Latest Google Earth Imagery Updates’ map since the December 17th update, a number of readers have let us know that there have been quite a few areas updated since then.

GEB reader Sladys has also pointed us to the fact that Genoa, Italy has been updated and the Costa Concordia can be seen in the new imagery. Soon after the Costa Concordia disaster happened we showed you satellite imagery of the wrecked cruise ship and not long after we had a look at a stunning 3D Google Earth tour of the disaster created by Peter Olsen.

It took more than two years for the ship to be salvaged and it was towed to Genoa in July 2014. The current image in Google Earth is from September 2nd, 2014. For pictures of the vessel arriving in Genoa see this article. To see the location in Google Earth, download this KML file 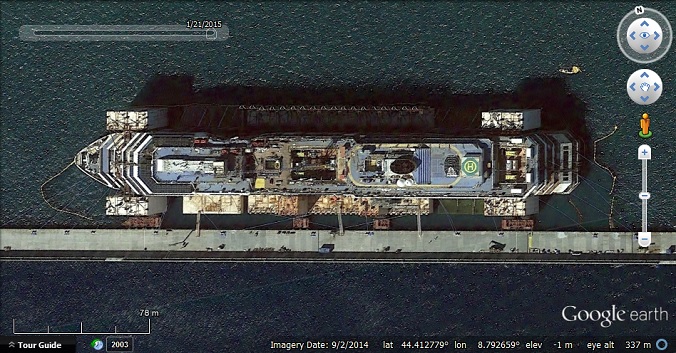 The Costa Concordia docked in Genoa, Italy waiting to be scrapped.

Other places that have updated satellite imagery include:

From GEB reader Sladys:
New York City and Denmark: the island Als from Sonderborg along with the western part of the island of Fyn and up to Fredericia.

From GEB reader MapMaker:
Some areas in Ukrane