Earlier this week we released maps showing the imagery updates of 2016 according to the ‘historical imagery’ layer. The maps were created using the Google Earth Plugin/API, which Google has since shut down. It was scheduled to be shut down on January 11th. It was still working yesterday, January 12th, but is not today, January 13th.

A few countries have received a mix of both satellite and aerial imagery:

If you see Google aerial imagery from 2016 anywhere else, please let us know in the comments.

Satellite imagery all seems to come from two suppliers, DigitalGlobe and CNES/Astrum.

Weather
Weather plays an important role in the gathering of imagery. Google avoids snow cover and cloud cover where possible, both of which are quite seasonal. This results in a curious pattern of imagery gathering, which you can see in this map.

Censorship
Iraq, Afghanistan, Syria and the Ukraine are censored and got no updated imagery during 2016. We do not know how the censorship is achieved, but it is most likely not up to Google. Our guess is that the satellite imagery providers have been paid to not supply imagery to Google for those countries. Imagery is being gathered, and it would appear that you can buy imagery for those countries via TerraServer and other suppliers. 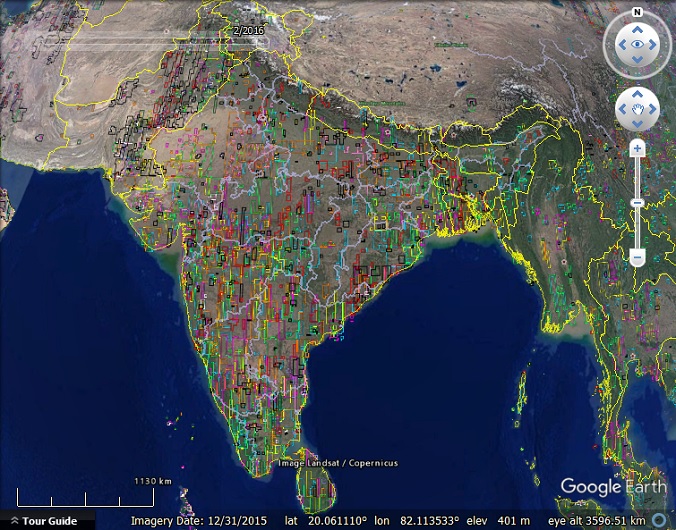 India and Pakistan got good coverage for 2016.

Today we are releasing our map of Google Earth imagery updates for 2016. Download this KML file

to see it in Google Earth.

Let us know in the comments if you find any interesting sights that we have not yet covered. 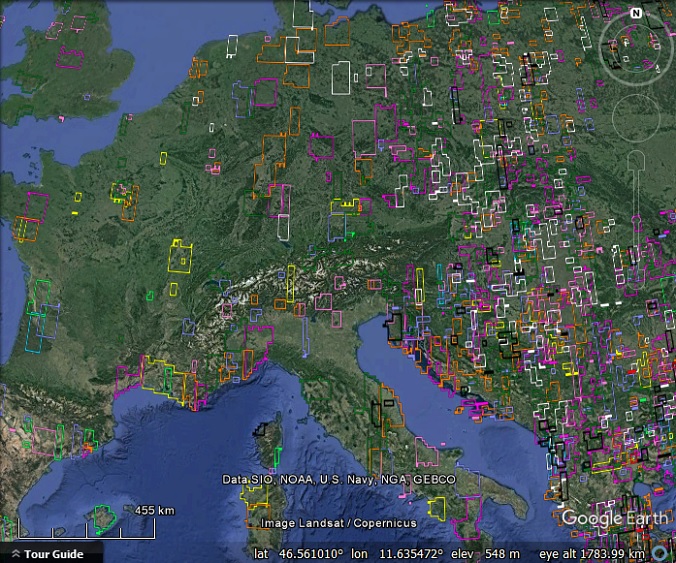 The Ukraine is an exception as it is still censored along with Syria, Iraq and Afghanistan, none of which received new imagery in 2016.

The maps show the approximate locations of imagery updates from January to November 2016 classified by month. As far as we know there are no December images yet in ‘historical imagery’. The maps are created using the Google Earth API / plugin, which is set to be shut down a couple of days from now (January 11th, 2017). 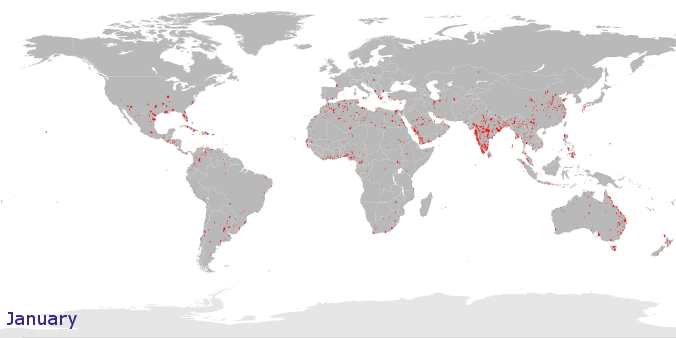 Speed up the animation by dragging the slider to the left to better see the seasonality of imagery, a topic we have discussed a few times in the past:
Preferred seasons for gathering imagery
2015 imagery updates animated 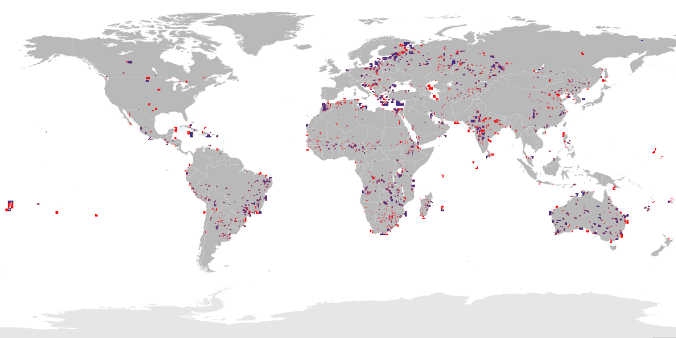 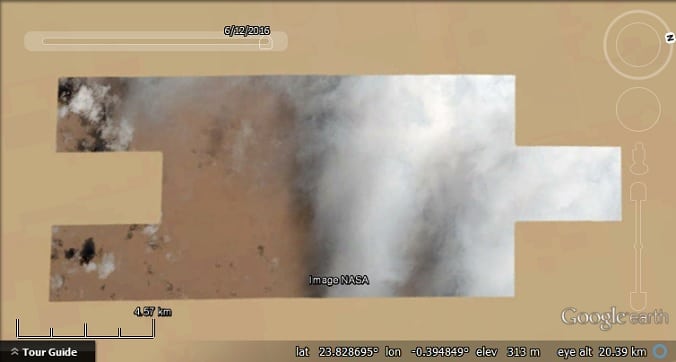 Google has done another imagery update. We have mapped out the approximate locations of imagery for March, April and May, 2016 and show the additions since the last update, which was just a week ago. 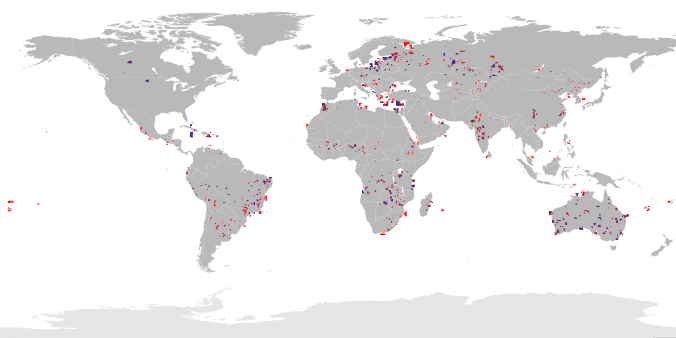 May imagery. Red:Recently added imagery. Blue:imagery as of May 29th. 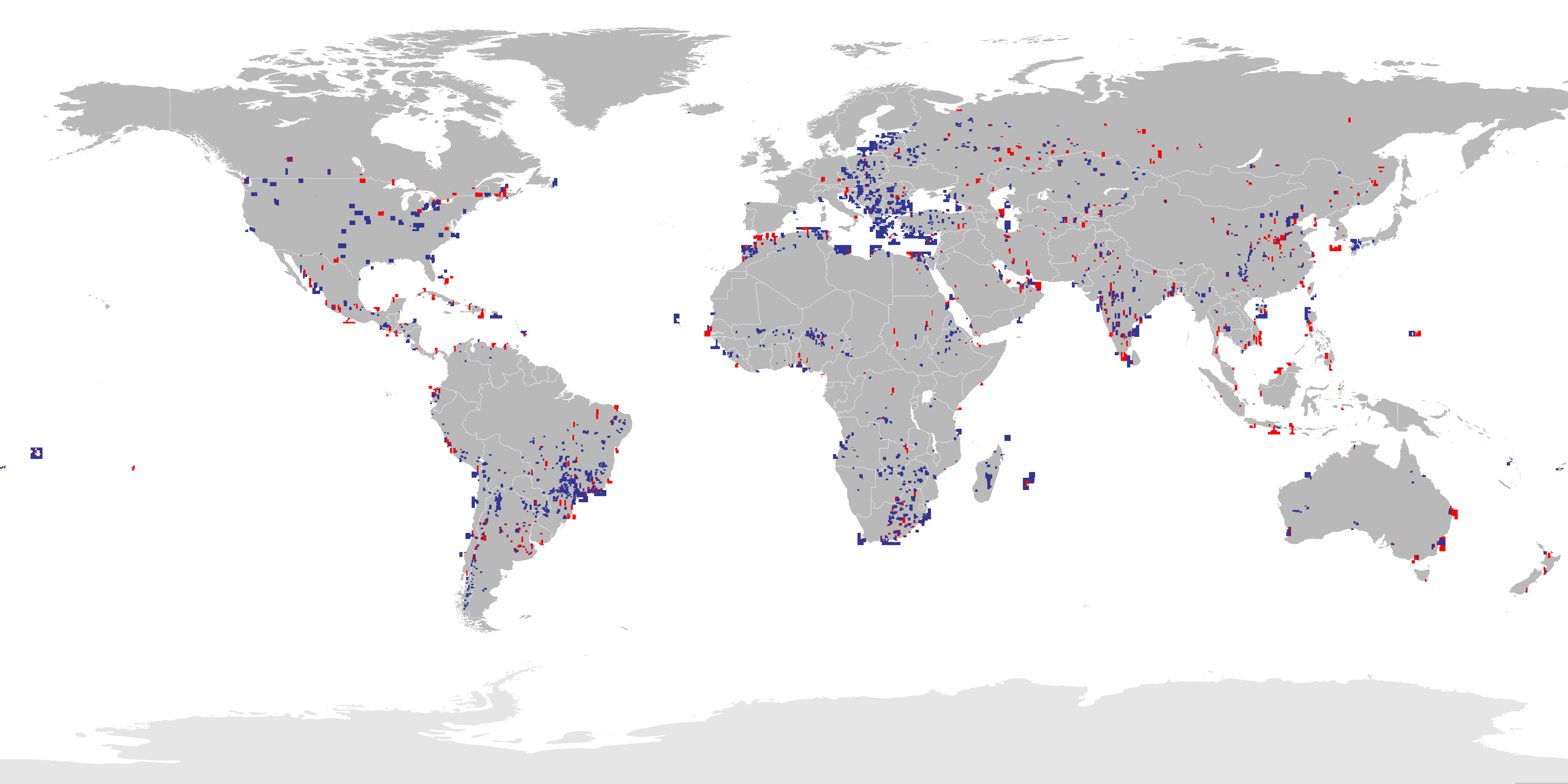 April imagery. Red:Recently added imagery. Blue:imagery as of May 29th. 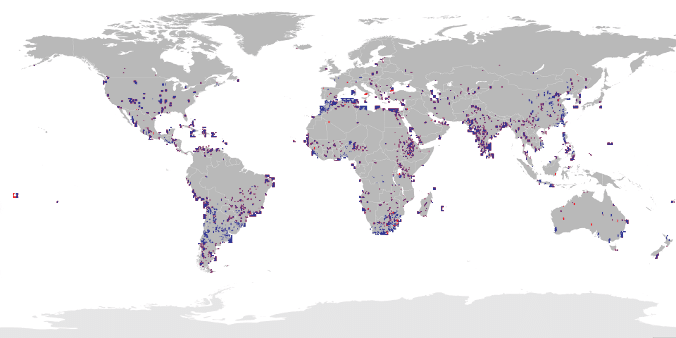 March imagery. Red:Recently added imagery. Blue:imagery as of May 29th.

. Note that these are fairly low resolution maps so the outlines are larger than the actual imagery.

Thank you to GEB reader Ben Reuter for letting us know in the comments of our month end post that there is new imagery of the Russian naval yard at Severodvinsk showing what he says is Russian submarine BS-64. 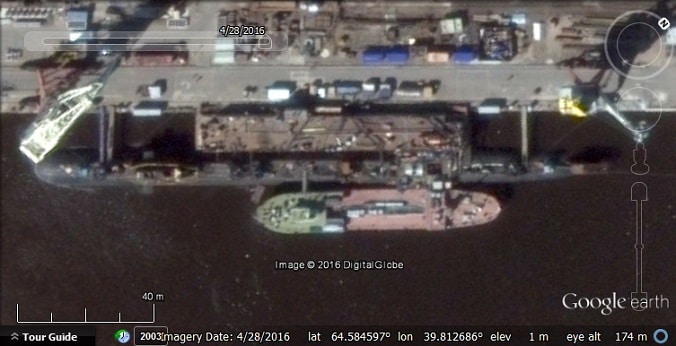 There is also a slightly newer image: 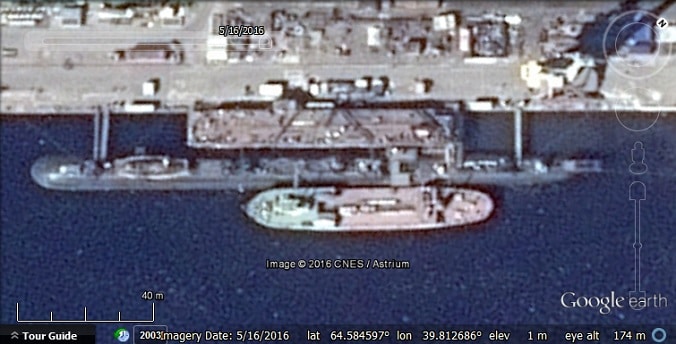 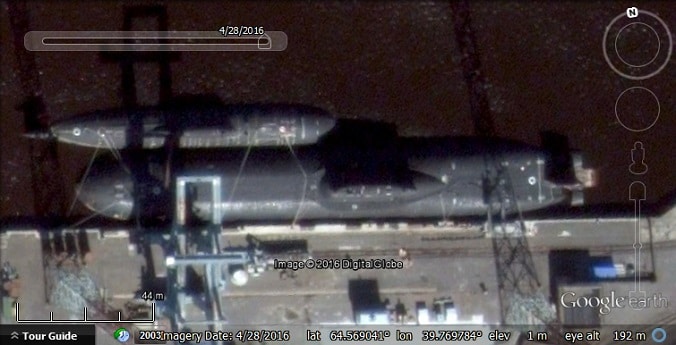 Possibly Russian submarine TK-208 (the larger sub in the image) 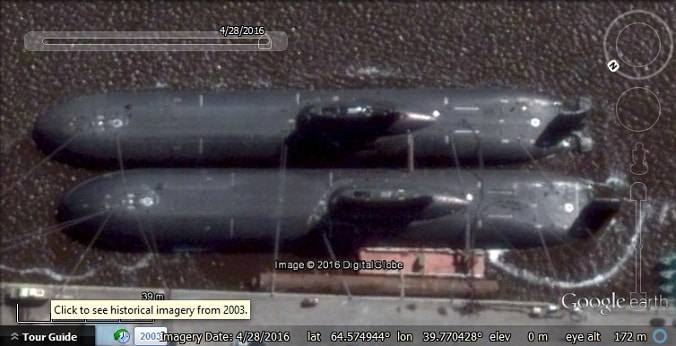 Keep in mind that there may be extra length underwater and we are only measuring the visible parts. In addition, TK-208, TK20 and TK17 all have the exact same body length, but the rudder part seems a bit longer on TK 208, we think because it is a bit higher in the water, exposing parts that are submerged in the other two.

Based on historical imagery, it would appear TK20 and TK17 have not been moved since 2009 and even have 3D models of them in that position, and if you turn on the Panaromio layer there are a couple of photos taken on board one of them.

So, do any of our readers know which of these submarines are still in active duty of some sort? Secondly, which is truly the longest and are they all four, longer than any other submarines in the world?

To find the submarines in Google Earth download this KML file

. Be sure to look around as there are other smaller submarines too!

Also of interest, the Wikipedia page shows a declassified satellite image of a Typhoon-class submarine berthed where we think TK-208 is now. It was captured in 1982. It is interesting to compare the state of the art satellite imagery available only to governments at that time, and classified “Top Secret”, whereas now we have better quality imagery (although surprisingly not that much better) freely available to the public.

Google has recently pushed out another imagery update. We have mapped out the approximate locations of imagery for March, April and May, 2016. The last update we did maps for was this one. There was a minor update since then, but we did not generate maps other than identifying that there was only one image from May at the time and it was of the Fort McMurray wildfire. 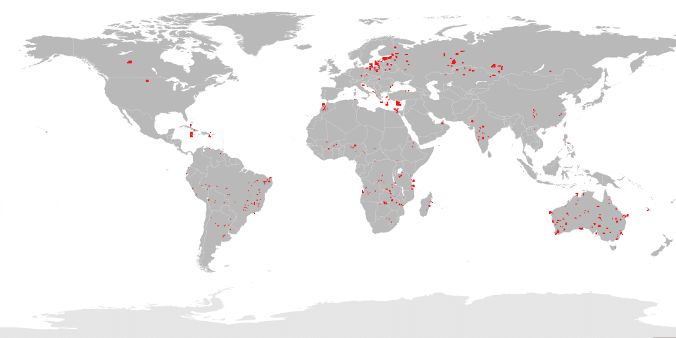 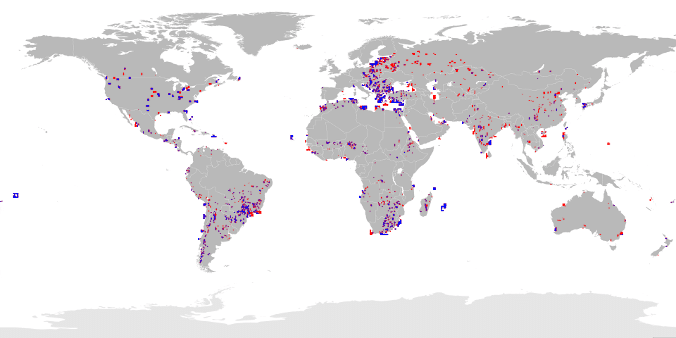 March imagery. Red:Recently added imagery. Blue:imagery as of May 10th. 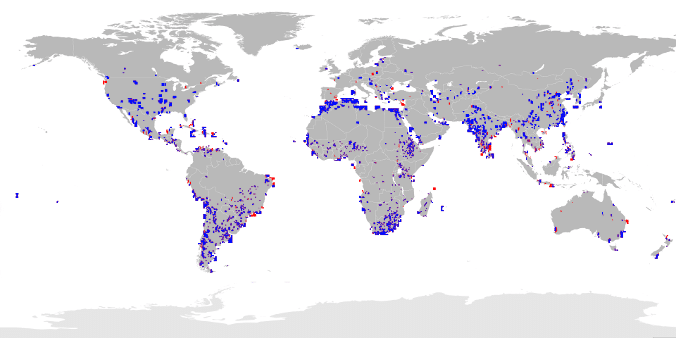 April imagery. Red:Recently added imagery. Blue:imagery as of May 10th.

On February 23rd, 2016, a tornado struck LaPlace, Louisiana. It was one of an outbreak of 60 tornadoes that struck over two days. It was a relatively mild tornado measuring EF2. The imagery is from April 7th, 2016, so more than a month after the tornado struck. 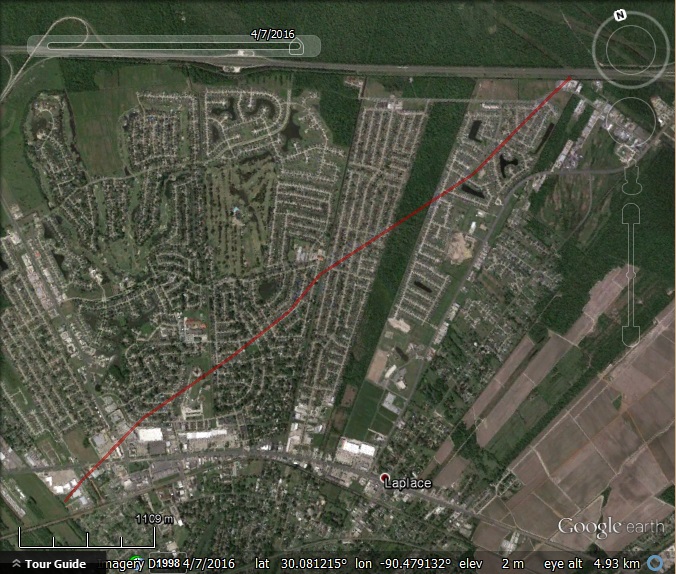 The path of the tornado. It didn’t leave much of a track visible from this altitude. 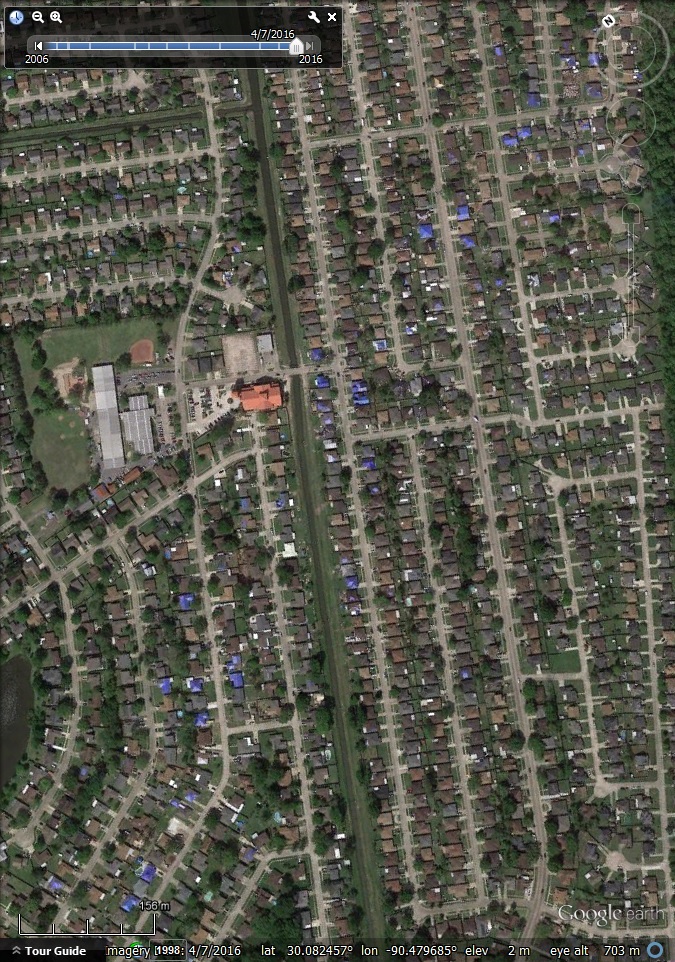 Zoom in a bit and notice the blue rooftops marking out that path the tornado took! 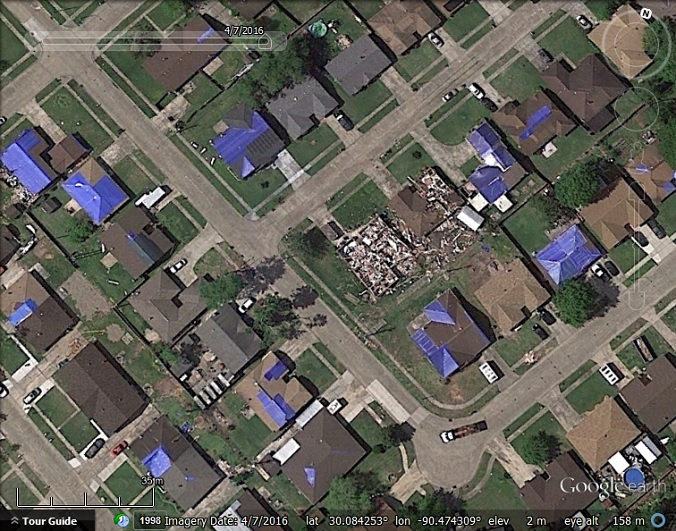 Most of the damage seems to have been at least temporarily repairable with blue roof tarpaulins. However, some completely destroyed houses can be seen.

Do any of our readers know why blue is the preferred colour for roof repair tarpaulins?