We have looked at a number of image recognition based search engines before, such as Google faces tracker, which we saw in 2013, which was designed for finding faces in Google Earth imagery, or Terrapattern a more recent and more general search engine. We have also had a look at DigitalGlobe’s use of artificial intelligence to analyse imagery.

Today we are looking at Decartes Labs which is very similar to Terrapattern. You select a location and it finds other imagery with similar features. They have three imagery datasets:
* Aerial imagery of the US from the National Agriculture Imagery Program of the USDA.
* A global mosaic of Landsat imagery.
* PlanetScope imagery of China (a product of satellite imaging company Planet). 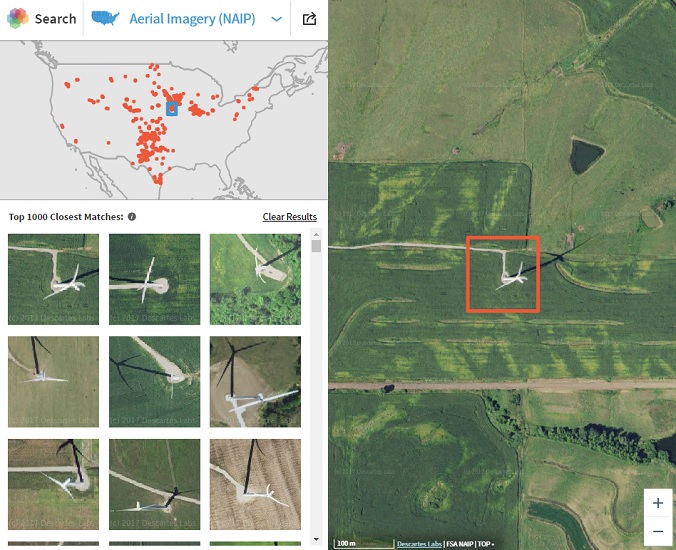 Be sure to try other distinctive features such as baseball fields, parking lots, storage yards, airports and more.

Terrapattern is a very interesting new online search engine for aerial and satellite imagery. It is still an alpha version and only covers a few cities in the US, but the potential is very significant. To try it out, just go to www.terrapattern.com, select a city, then select a map tile of interest and it will find other similar map tiles. 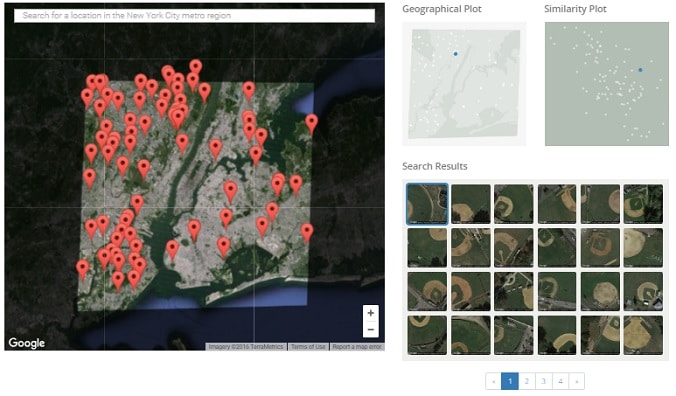 The baseball fields of New York.

We found it remarkably good for finding various types of sports fields (football fields, tennis courts, baseball fields, golf courses). We suggest also trying things like container storage areas, parking lots, junk yards, different types of roofs, etc. We found that if we selected a section of a bridge it could find other bridges as well as piers, but not with 100% accuracy. This is because, as explained in the FAQ, it works on individual tiles and large features like bridges, which cover many tiles, are less accurately recognised. We foresee, however, a future version working on different scales of detail to classify structures of different sizes.

It is open source, so if anyone has computing power and other necessary resources they can use the code for other parts of the world. We are not sure if explicit permission is required before using Google Maps imagery for something like this, so be sure to read the Geoguidelines before implementing such a project.

They are hardly the first to think of using image recognition on aerial and satellite imagery. For example, we have previously had a look at German design studio Onformative who applied face recognition to imagery with remarkable results. It is probable that all major map makers have considered the possibility of using imagery to identify features relevant to maps and highly likely that several companies have built systems to attempt to do this. If any of our readers knows of any such projects and how successful they have been, please let us know in the comments. Google has a sophisticated image recognition artificial intelligence (AI) that they use with photos to provide both Google image search and tagging capability in Google Photos. It is almost certain that they have tried it out at some point on satellite / aerial imagery too.