In the past, Google would publish a network linked KML file that showed the outlines of imagery releases, including all historical releases going back to 2009. However, early this year they discontinued it and instead have been publishing a map on the Maps Gallery that only shows the latest release. Also, other than taking a screenshot of the maps, there was no way to save them for later viewing.

Now Google have released a map on the Maps Gallery that once again shows us historical releases. Note that it does not currently include the two latest updates from November 3rd, 2014 and November 8th, 2014. It must also be noted that the dates given are not the dates that the imagery was captured, but rather the dates that the imagery was added to the Google Earth database. In many cases the imagery being added is older than previously existing imagery and gets added to historical imagery rather than the default layer.

There is still no way to extract the KML, which makes further analysis difficult. It would have been fun to do heat maps showing which areas received multiple updates.

We can see a number of interesting patterns. There is poor coverage over tropical forests, deserts, and northern regions. Tropical forests tend to have cloud cover most of the time, making it difficult to capture imagery with clear skies. Similarly, the northern regions often have snow cover, making it difficult to capture good imagery. It is possible that capturing imagery over deserts is also difficult, or it may simply be that their low populations make them less interesting to imagery providers. Iraq and Afghanistan have received very few updates, presumably for security reasons.

[Update: As pointed out by GEB readers Maarten, Chris and an anonymous email, the ‘Latest Google Earth Imagery Updates’ map has been updated to November 19th 2014.]

We came across an interesting story about a Tongan islet disappearing. Read more about it here.

To see it in Google Earth, look about 5km North West of Nuku’alofa, Tonga, or fly straight to it with this KML file. Turn on historical imagery to see satellite images of it from 2002 to 2013. 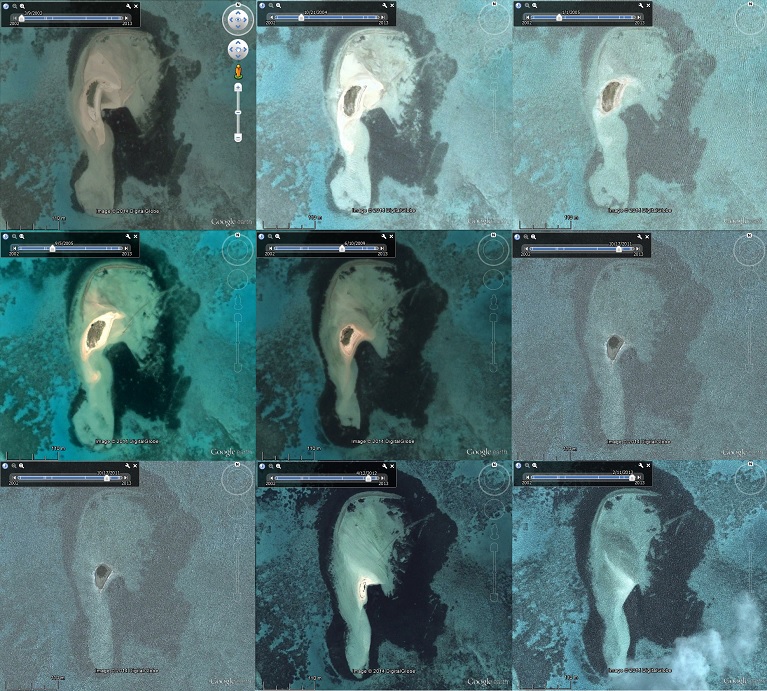 The Tonga islet of Monaufe disappearing as seen in Google Earth historical imagery.

It is not the first Togan islet to disappear. Here is an article from 1913 printed in the Australian paper the Sunday Morning Herald which also mentions an islet in the Tonga group disappearing.

Following on from yesterday’s post about historical imagery, we thought it would be interesting to make an animation. As you can see below, we have created an animated gif image showing the historical imagery for Europe. Because there is very little imagery prior to the year 2000, we have shown decades from 1940 to 2000 and then yearly snapshots from 2000 to date.

If you look carefully, you can see the difference between aerial imagery, which is introduced in large patches, and satellite imagery, which appears in strips running in a north-south direction.

We have covered historical imagery a number of times since its introduction to Google Earth with version 5.0 in February 2009. However, it is such an important feature that it is worth revisiting.

There are several different ways to get to Historical Imagery: 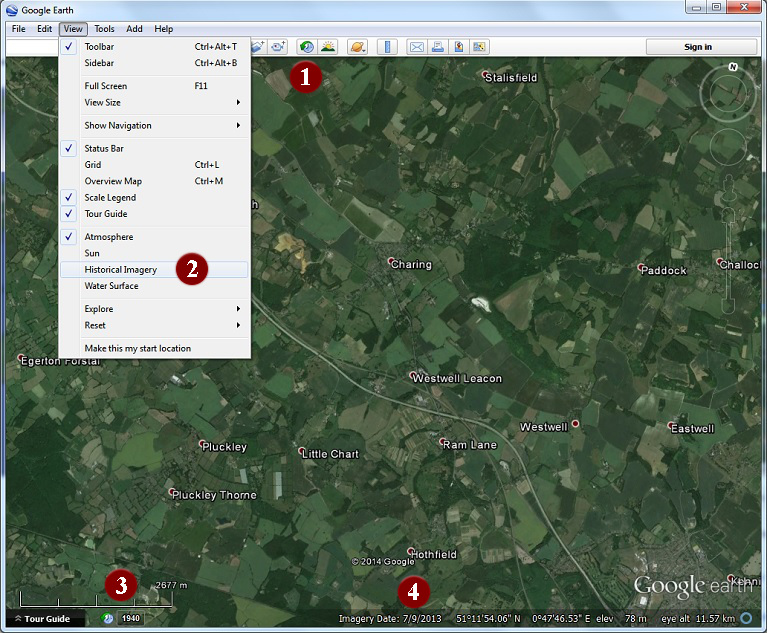 It is also important to know how to tell the date of the imagery being displayed in Google Earth. If you put the mouse over the location you are interested in, Google Earth will show “Imagery date” near the bottom center of the screen. This is shown as 4. in the screen shot above. Do not confuse this with 3. which is the date of the oldest available historical imagery.

When you open Historical Imagery, the toolbar shown below is displayed. The view in Google Earth will also tend to look patchy, because Google Earth is no longer blending various images together.

Use the time slider to display imagery from the date you desire. Note that:

Some of the imagery in Historical Imagery may actually be more recent than the default imagery displayed in Google Earth. This is because Google selects the best quality imagery available for a location in preference to the most recent.

Switching to the Historical Imagery view also turns off the new 3D buildings mesh and displays the 3D models that were there previously – if you have the 3D buildings layer turned on.