With the recent update to the Google Earth ocean floor data it is worth having a look at some of the patterns we can see and what causes them. In the past, some of the patterns have been mistaken for an alien base or Atlantis. However, most of the stranger patterns are merely an artifact of how the data is collected, processed and combined with other data-sets. 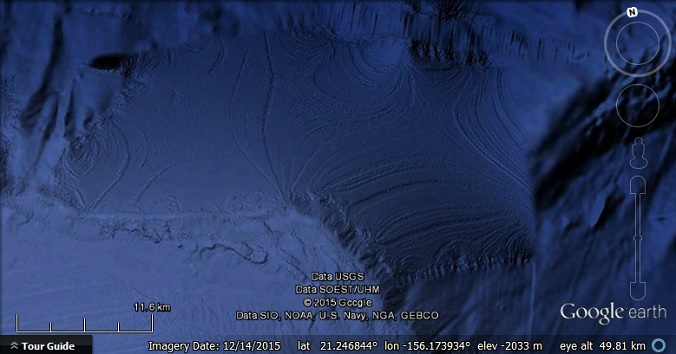 In the area around Hawaii, we can see a lot of streaks and swirls. This is a result of an algorithm used to interpolate the sea floor depth between data points and does not reflect the actual appearance of the sea floor. In the above screen shot there is no depth data for most of the central region of the image where the streaks can be seen. 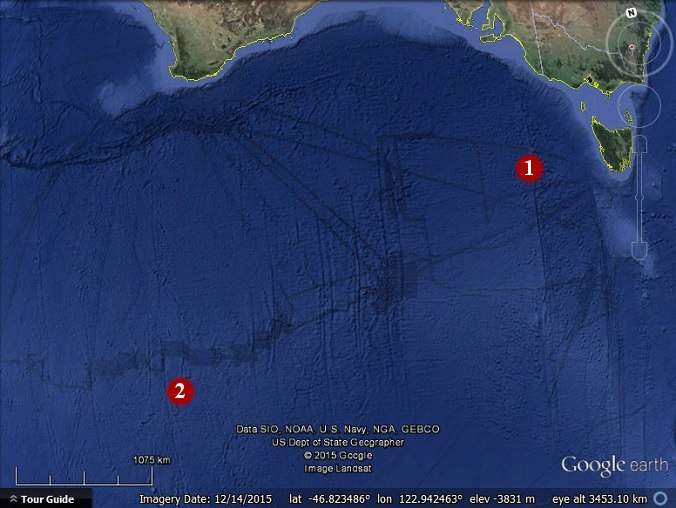 When zoomed out we can often see tracks (1) of higher resolution data, which are the tracks of ships equipped with sonar that mapped the ocean floor along their route. In many cases they have concentrated on mapping the joints between tectonic plates (2) that are of particular interest to oceanographers and geologists.

The tracks also show us the routes the ships took. In the above image we can see the routes fan out from the southern tip of Tasmania as that is the route that would be taken by any ships coming from the east of Australia. Similar patterns can be seen elsewhere, with a fan shapes around Hawaii, the west coast of the US, Cape Town, South Africa, and a number of other locations. There seems to be a popular destination in southern Chile, but the tracks fade away as they approach the coast, so we weren’t able to identify the exact destination. A lot of the ships also went through the Panama Canal. The tracks are highlighted in a graphic in this article that we looked at on Monday. The ships’ tracks are much less visible near the coasts, most likely because higher resolution data is available for shallower coastal waters. 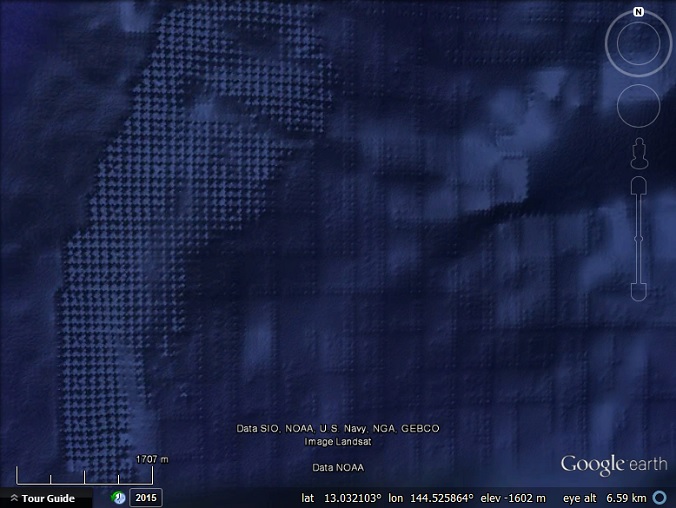 In the above image from a location near Guam, we see an area where there has been a survey done with depth measurements taken at very regular intervals. The pattern is caused by combining those measurements with another lower resolution dataset that has a different average depth, so each measurement appears as a dip or bump. 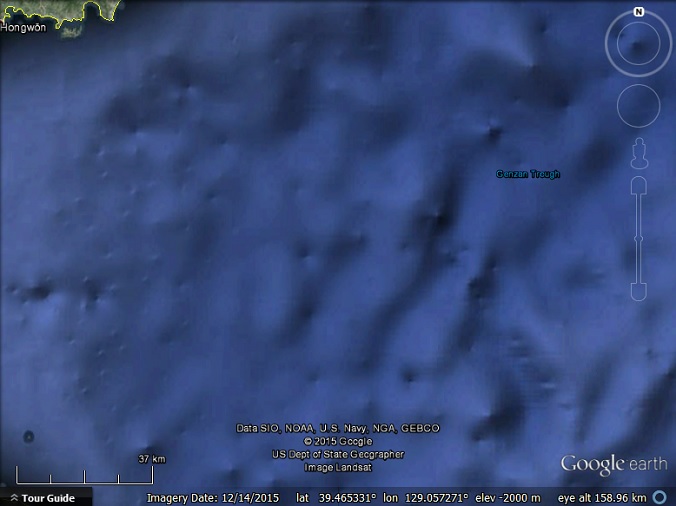 The same effect as mentioned in the previous image can be seen here, but with fewer data points.

As we have mentioned before Google Earth often shows different ocean floor data depending on how zoomed in you are. This is very noticeable around Hawaii and Guam. 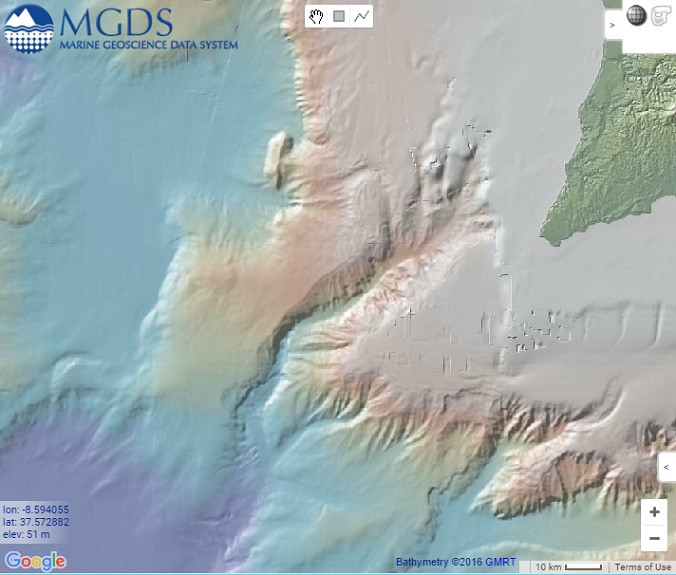 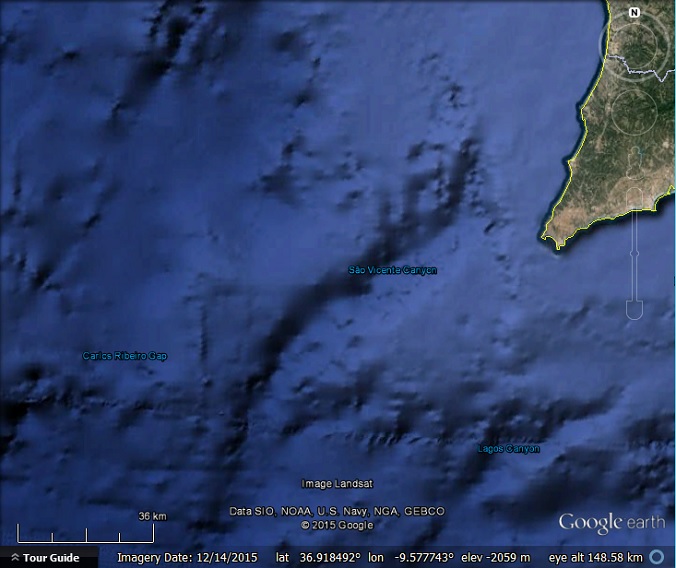 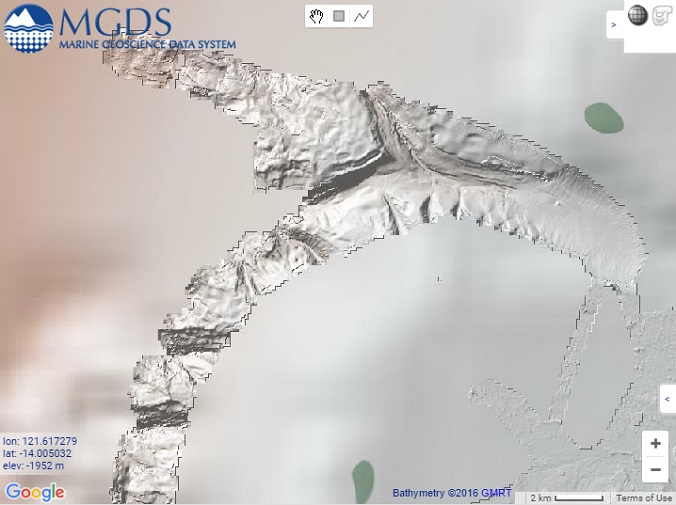 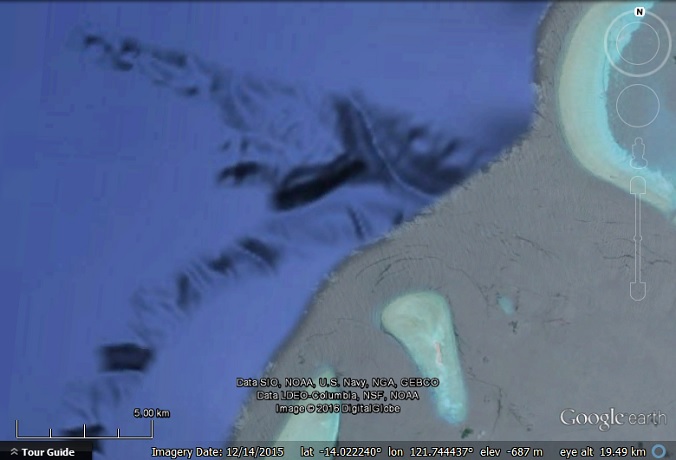 In late 2014 we had a look at a map of the ocean floor published by the Scripps Institution of Oceanography, University of California, San Diego. Apparently that map was incorporated into the Google Earth ocean floor data just before the New Year. Read more about it here.

Note that what appears in Google Earth is a combination of the Scripps map and a variety of other sources, including sonar data gathered by ships. Google Earth does not have historical imagery for ocean data. We have noted before that the ‘historical imagery’ mode does show a different ocean floor map, but there is no easy way to find out what Google Earth showed a few months ago other than keeping screen shots. We don’t have many screen shots of the ocean floor, but [this post]((https://www.gearthblog.com/blog/archives/2015/04/historical-imagery-ocean-floor.html) does have a screen shot taken in April 2015, so we can compare that with the current location in Google Earth today. 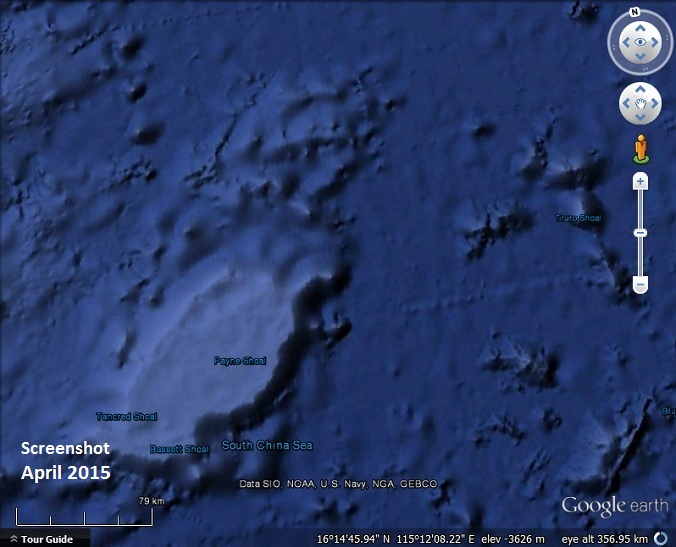 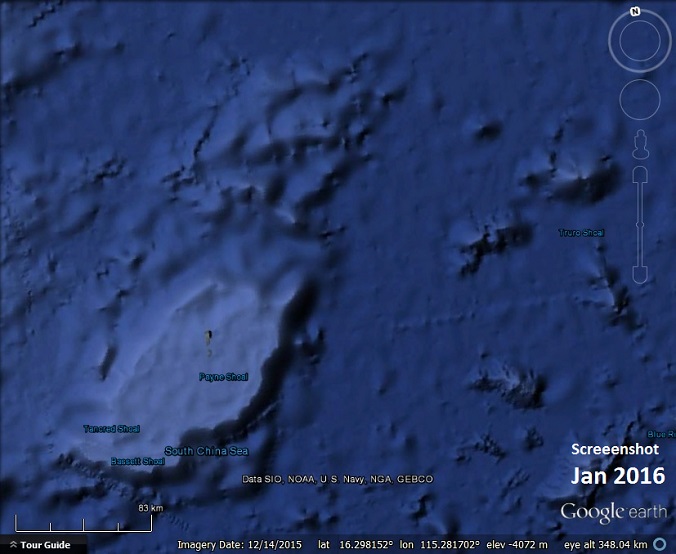 As far as we can tell, a number of undersea mountains have disappeared in the new data. We believe this represents errors in the older data that have been corrected.

We can also compare the current Google Earth data with the Scripps map as published here in KML format. 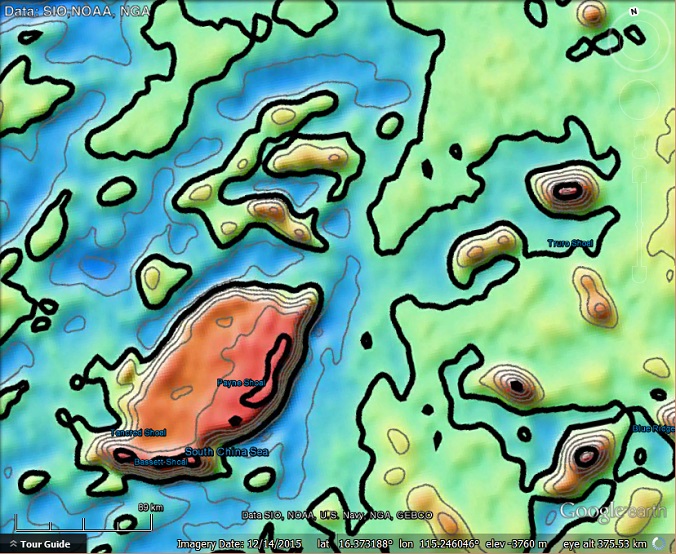 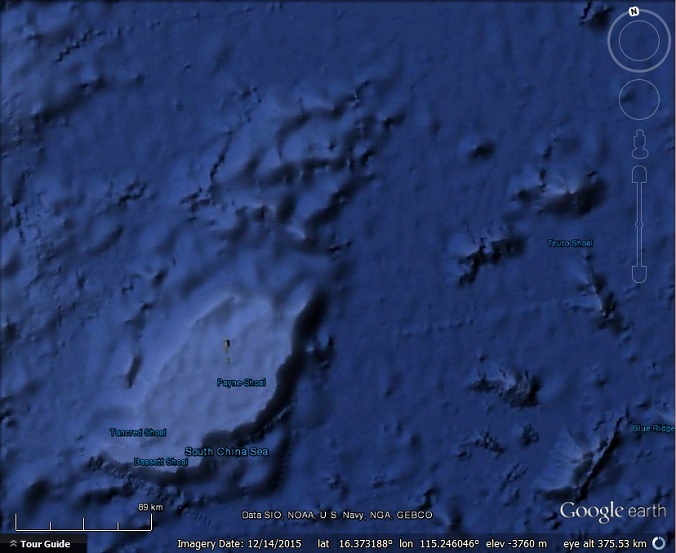 The Google Earth data (right) is clearly higher resolution than that version of the Scripps map (left).

The Scripps sea floor map has also been used to discover a new microplate in the Indian Ocean. 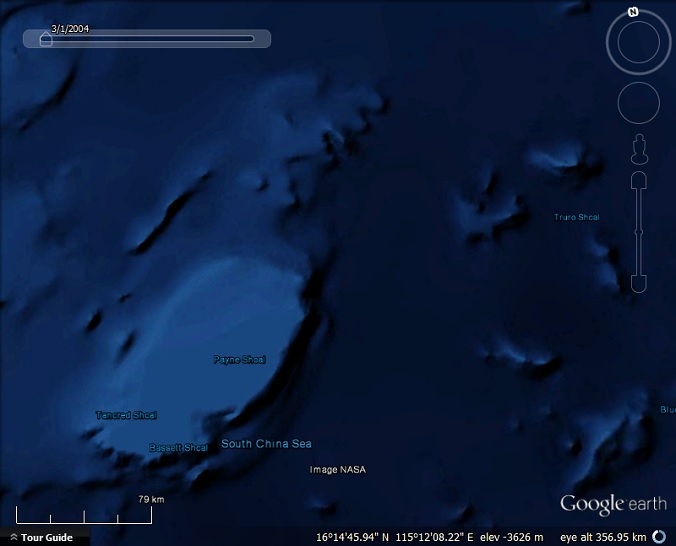 The NASA supplied data as seen in ‘historical imagery’ 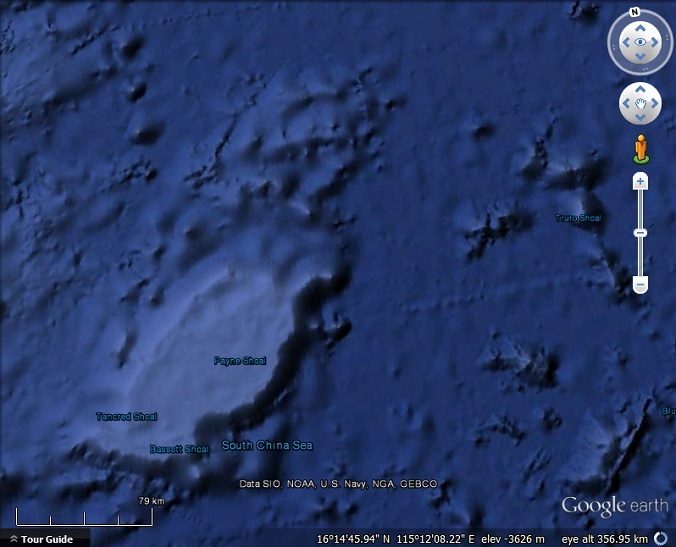 The default view with data from a variety of sources

It is interesting how whole underwater mountains are completely missing in the NASA data and some locations look quite different in the two data sets. The NASA data is of lower resolution and presumably obtained by a different method.

Another interesting effect is how satellite imagery that extends into the oceans is mapped onto the sea floor topography. If necessary you can correct this in Google Earth Pro by turning off ‘Terrain’ in the layers. 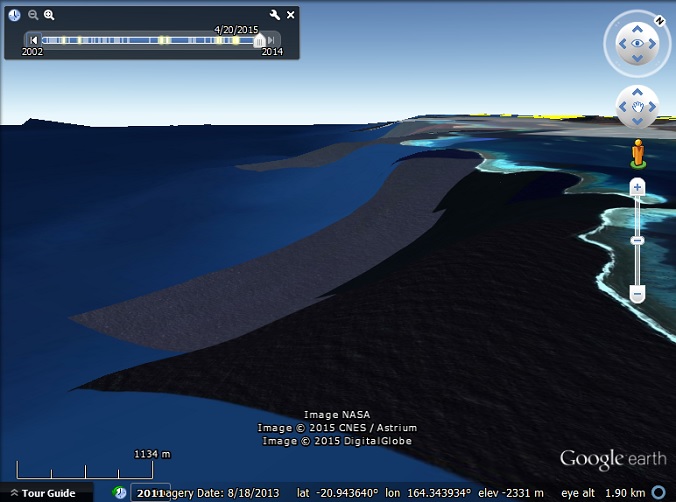 As we have noted in the past the tracks across the ocean floor are not signs of alien activity, but tracks of higher resolution data obtained from ships.

We have looked at the GEBCO data before and you can view their map in Google Earth using this KML file.

We have also looked at a map from the Scripps Institution of Oceanography, University of California, San Diego, which is based on gravity measurements from satellites. You can view it in Google Earth with this KML file.

For best results when viewing the ocean floor, turn off the ‘Water Surface’ option in the ‘View’ menu.

Google Earth’s 3D view of the Ocean floor was first introduced in version 5. It has been improved a number of times since then. Panaromio photos in the oceans were added in 2010 and underwater Street View in 2012.

Google’s current ocean floor data comes from a number of sources, including:

One of the organizations that has provided this data in the past is the Scripps Institution Of Oceanography, University of California, San Diego. Yesterday, they released some new data from the satellites CryoSat-2 and Jason-1, including global maps of the sea floor that they have released in KML format so they can be viewed in Google Earth. Read more about it and download the KMLs here. Be sure to watch the video featured on that page, which explains more about it. 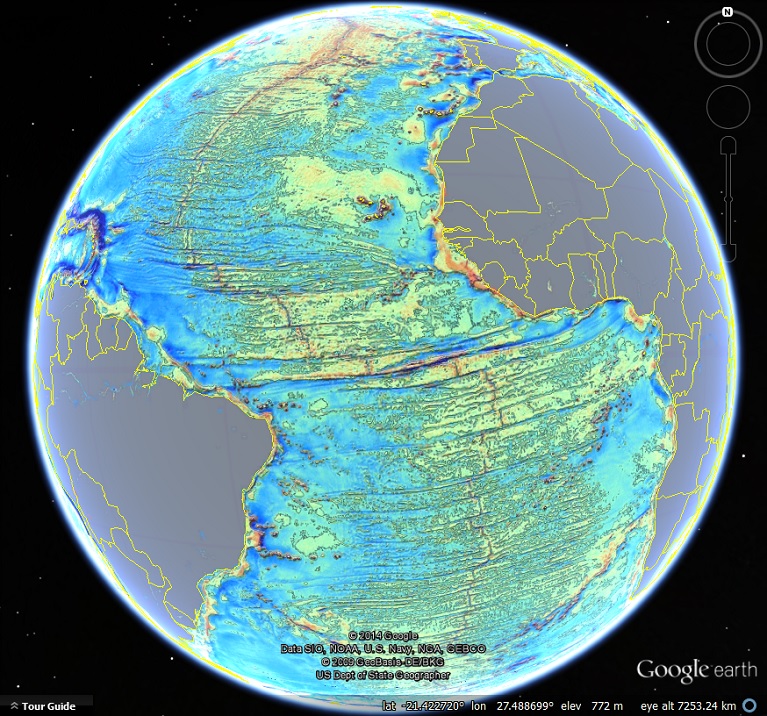