Released in February 2014 the Google Maps Gallery is a good way to find interesting maps that are based on Google’s mapping products. The Gallery used to include maps from several Google products, including Google Maps Engine(GME) and Google My Maps.

In January of this year, Google Maps Engine was deprecated by Google and it will be turned off on January 29th, 2016. As part of this deprecation, Google initially stopped allowing GME users to publish their maps to the Google Maps Gallery, and in the last week have removed all GME maps from the Gallery.

In addition, Google has recently retired one of its older authentication API’s known as OAuth 1.0 which was deprecated in April 2012 in preference for OAuth 2.0.

There is a special type of KML network link that causes Google Earth to load the linked data as a layer in ‘Layers’ instead of the usual ‘Places’. Maps loaded this way cannot be copied/edited or rather annoyingly even bookmarked. This allows map publishers to let users view their maps but not easily copy them. We believe that Google Earth used OAuth 1.0 for this type of network link.

Because of the retirement of OAuth 1.0, a couple of weeks ago Google pushed out Google Earth version 7.1.5, which includes the new OAuth 2.0. Google then sent out an email to GME users stating that users wishing to view their GME maps in Google Earth will need to upgrade to version 7.1.5. As of this writing however, we are still able to open some public GME maps in older versions of Google Earth.

Last year we showed you two different ways to open maps from the Google Maps Gallery in Google Earth. At the time, clicking the “View in Google Earth” button always loaded the map via Google’s special network link that loaded the maps in ‘Layers’. However, that has now been changed so that they load as ordinary KML’s in ‘Places’.

So, what do the above changes mean to you? We do recommend upgrading to the latest version of Google Earth – find download links at the end of this post. If you have public GME maps, they are no-longer easy to find on the Gallery so, consider porting them to My Maps or finding other ways to publicise them. Google’s own ‘Imagery Updates’ maps are no-longer easy to find and even if you know where to find them it is not obvious how to view them in Google Earth. For example this map has no obvious “View in Google Earth” or “download as KML” options. However, it is possible to view it using this KML file

and by looking at the format of that URL, you can view other GME maps in the same way. 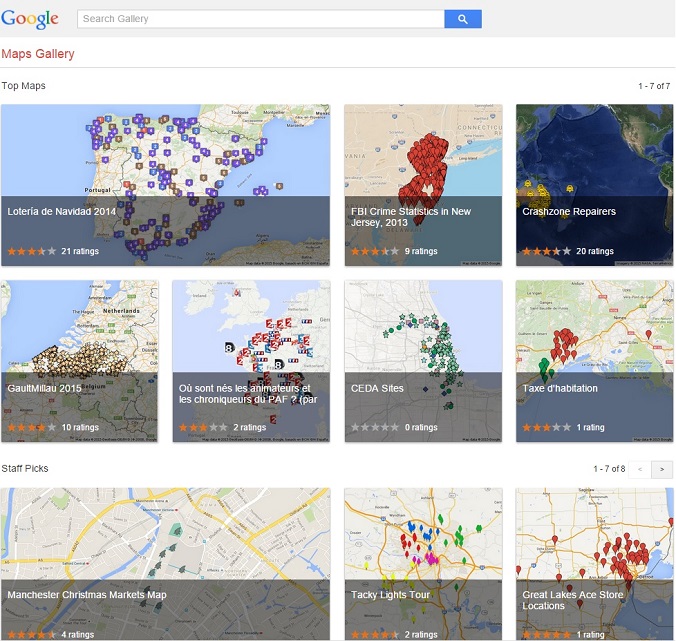 In February this year, Google launched the Google Maps Gallery.

The Maps Gallery hosts an impressive collection of maps. Although the maps can be viewed directly in the Maps Gallery, many of them are much better viewed with Google Earth, especially for maps that have a lot of detail. There are also a few, such as the collection from the SETI Institute that we showed you, that give a much better global perspective when viewed in Google Earth.

There are two different ways to get Maps from the Maps Gallery into Google Earth. The first is by simply clicking the button near the bottom right corner of the map that says ‘View in Google Earth’. This will download a KML file named ‘map.kml’ and uses a special type of network link that shows the KML under the ‘Layers’ pane in Google Earth instead of the usual ‘Places’. It is impossible to save it in Google Earth, or export it to KML. We believe the purpose of this is a form of copy protection. The downside is that you cannot even save the link, so if you need to view the Map again at a later date, you need to reopen the downloaded ‘map.kml’ file.

The second way to get a map into Google Earth from the Maps Gallery, is by clicking the ‘Share’ button which looks like three dots with lines between them, and is found near the top right corner of the map when viewed in the gallery, or if you have opened the map to full screen it is in the map key near the top left. Select ‘Download KML’ from the drop down menu. This downloads a KML file that can be viewed in Google Earth and loads in the ‘Places’ pane and can be saved to ‘My Places’ or exported to KML.

However, not all maps show the ‘View in Google Earth’ button (such as this one ) and many maps have the ‘Download KML’ option greyed out (this includes the ‘Latest Google Earth Imagery Updates’ map). Also, using the second method, there is the option to download the KML for a particular layer, and in some cases such as this map the only layer available by this method is the map legend, which isn’t very useful. The same map shows all layers in Google Earth when viewed using the first method. 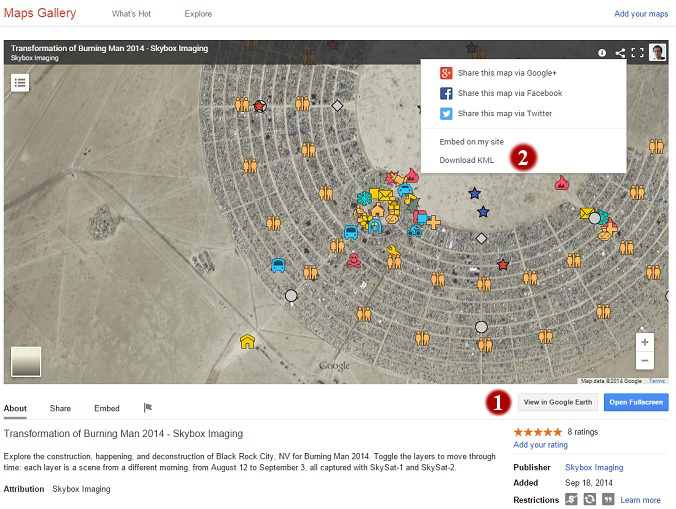 Google has just launched the Google Maps Gallery to help “unlock the world’s maps”. It’s an impressive collection of maps of various kinds, easily accessible in one place. 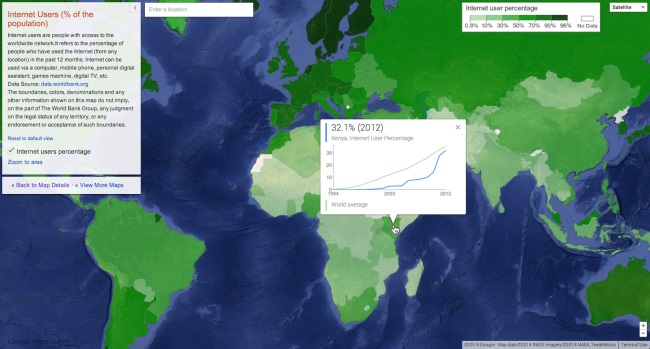 The maps all have a “View in Google Earth” button to generate a KML for your use, and some of them (such as this Tokyo 1680 map) have slick transparency sliders to make them more useful. As Keir Clarke at Google Maps Mania points out, the maps are all embeddable as well and makes it somewhat like a “YouTube for maps”.

There are some great maps in there and I strongly encourage you to check it out. You can browse them all at maps.google.com/gallery/ or read more about it over on this post on the Google LatLong Blog.