This is the fourth and final in a series of posts about the size of the data in Google Earth. We already looked at:

Today we are putting it all together and trying to come up with an estimate for just how large the Google Earth database really is.

The total area of 3D imagery currently in Google Earth is approximately 524,000 sq km. We re-ran our tests for 3D imagery a number of times trying closer and closer views and every time we got closer, the figure got bigger. We eventually settled on an estimate of 2 GB to 1 sq km of 3D imagery although we believe it is an underestimate. This gives us a total of 1024 TB for 3D imagery.

For areas of countries we mostly relied upon this list on Wikipedia.

Based on our maps from this post, we estimate that the European countries Portugal, Spain, Italy, France, United Kingdom, Germany, Netherlands, Czech Republic, Austria, Montenegro, Greece, Denmark, Switzerland and Belgium have about 50% aerial imagery, as does Japan. Total area covered 1,506,000 sq km.

The US has approximately five times as much aerial imagery as the rest of the world combined.

Based on our previous results, we estimate aerial imagery requires approximately 2 GB per 100 sq km. This gives us a total of 179 TB for aerial imagery.

This is the hardest to estimate. We will exclude the default layer in our calculations. The continental US has on average about seven aerial images for any location. This gives us a total of about 898 TB. Europe and Japan have approximately 50% coverage with five layers of aerial imagery. This comes to 118 TB. About a third of the world’s land area has five layers of good quality satellite imagery. This comes to 527 TB. About one percent of the world’s land area has twenty or more good quality satellite images. This comes to 75 TB. 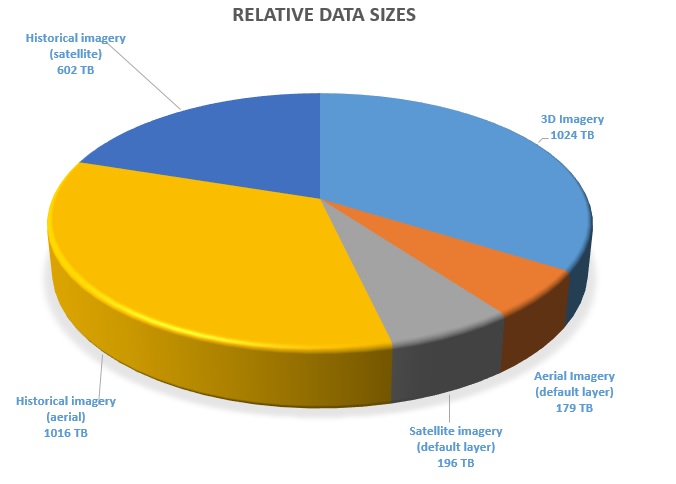 So our final estimate for the total size of the Google Earth database is 3,017 TB or approximately 3 Petabytes!

Compare that to this post from 2006 at which time the estimate stood at 150 TB.

How accurate is our estimate? Given that the bulk of the size comes from historical imagery for which we simply do not have very accurate data, our estimate could easily be a long way from the true figure. In addition, the method used for determining how much data each imagery type requires was not particularly accurate. We have also completely ignored the old type of 3D buildings, and all the street and mapping data or layers. We have considered Street View to not be part of Google Earth as it should really be considered more of a Google Maps product or a product in its own right. We believe that overall it is a significant underestimate and the database is actually quite a bit bigger.

A significant proportion of the Google Earth database is US aerial imagery, both current and historical. For this we can largely thank the USGS and the USDA Farm Service Agency, although much of the most recent imagery is gathered by Google itself.

Our first test was to pick a location that we know has a lot of historical imagery. We chose Rio de Janeiro, Brazil. We prepared the view we were interested in and cleared the Google Earth cache then allowed the default layer to load. Just the default layer, without moving the view at all, filled the cache to 4 MB. We then switched to historical imagery and cycled through all the historical imagery, again without moving the view. The cache was now at 580 MB. The reason for the enormous size is that Rio has approximately 220 unique images for the location we chose. On average, each image added about 2.6 MB to the cache. This is less than the default view takes, because many of the historical images do not cover the full area in the view, with some of them being only barely visible at the edge of the screen. 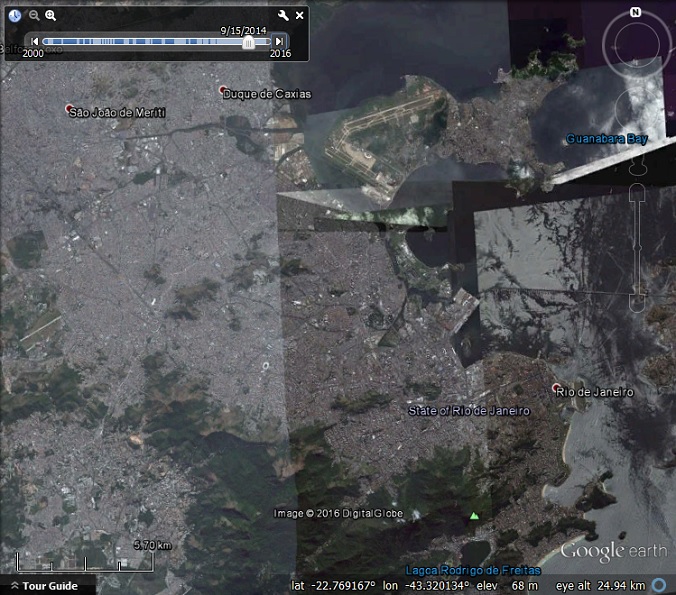 The area we chose in Rio de Janeiro, Brazil. 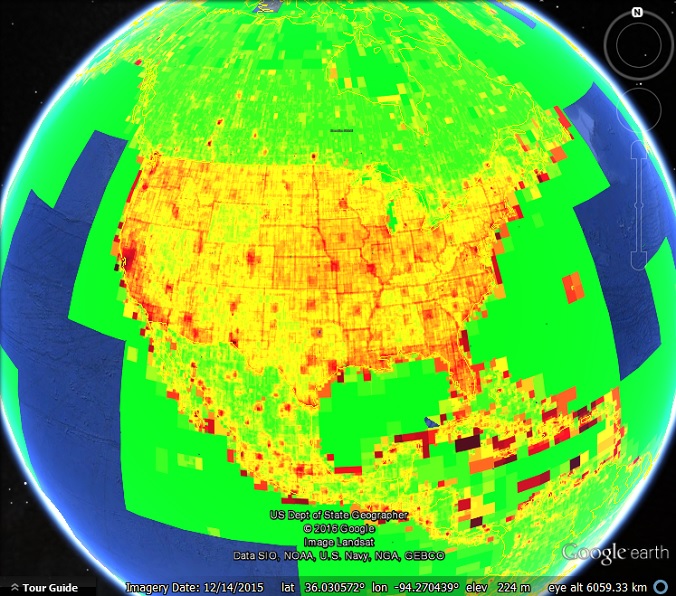 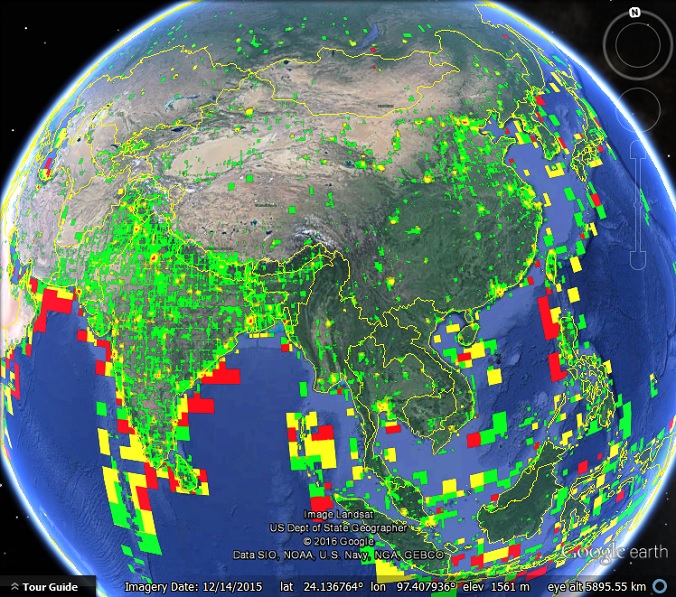 This is the second in a series of posts on Google Earth data sizes. Yesterday we had a look at 3D imagery and also compared it to the aerial imagery in the same location. Today we are looking a the different types of 2D imagery. As we have seen in the past, Google Earth has imagery in a wide variety of resolutions. 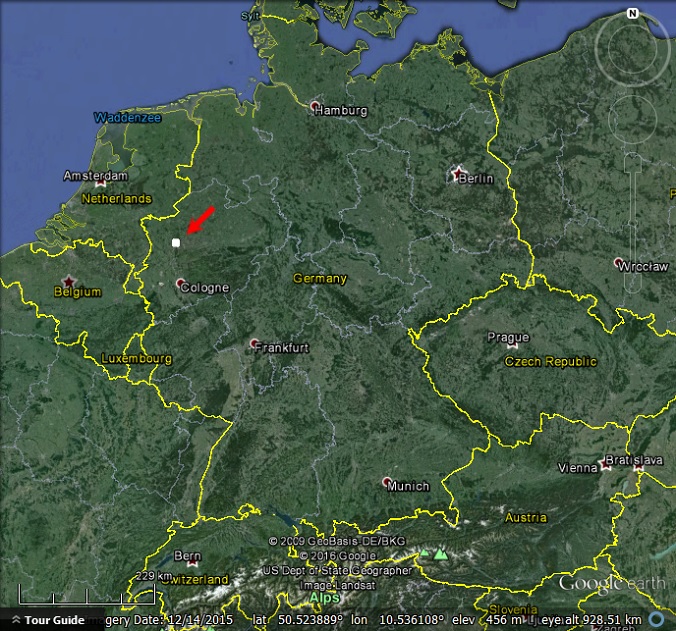 Just that tiny white square has 1.5 GB of aerial imagery.

We tested using regions of 100 square kilometres with a camera height of 1 km, except for the regions with aerial imagery, where we set the camera hight to 300 m to try and ensure the imagery loaded completely.

As you can see, the amount of data used by different imagery types varies dramatically. The ocean floor figures may be a little inaccurate as they include the 3 MB or so that Google Earth downloads just on logging in to show the earth when zoomed out. We initially thought the German aerial imagery was higher resolution than in other parts of the world, but the results suggest that is not the case.

The country of Germany is approximately 350,000 square kilometres. It would take about 525 GB to store all the aerial imagery in the default view for the whole country. Historical imagery adds a whole new dimension, which we will look at in our next post in the series.

Samples from the locations we tested. Note the scale on each image.

To see the locations we tested with in Google Earth, download this KML file

Google continues to add new 3D imagery on a regular basis. Most of the major population centres in the US and Europe will soon be covered and many other parts of the world have significant areas covered too. So, just how much data does it constitute and how does it compare to plain overhead imagery? And when you browse an area in Google Earth, how much data must your computer download?

To answer the above questions we used the Google Earth cache to monitor how much data is being downloaded. We first deleted the entire cache, which can be done by first signing out of the Google Earth servers (File->Server Sign Out) and then going to Tools->Options->Cache and clicking the ‘Delete cache file’ button. Next, we created a zigzag path that covered a square region of 3D imagery and ran it as a tour as described in this post. We initially set the camera height for the tour to 1 km. At this height the camera can see the next row of the zigzag so that as it proceeds, all imagery in the area covered is fully loaded to the resolution Google Earth chooses for that view height. We did this for several different patches of 3D imagery. We also discovered after running most of our tests that if we get closer, then even higher resolution imagery is loaded, so we did another test for a smaller area from a height of just 300 m.

Our main tests covered an area of approximately 100 square kilometres each. As you can see below, this is actually only a tiny amount in relation to some of the larger areas of 3D imagery, but we could not do much larger areas as we were concerned about exceeding the size limitations of the Google Earth cache. As it was, we discovered that although the maximum size you can set for the cache in Google Earth’s options is 2 GB we were, in fact, able to grow it much bigger. At one point it even exceeded 4.6 GB and then later shrunk to just over 2 GB. 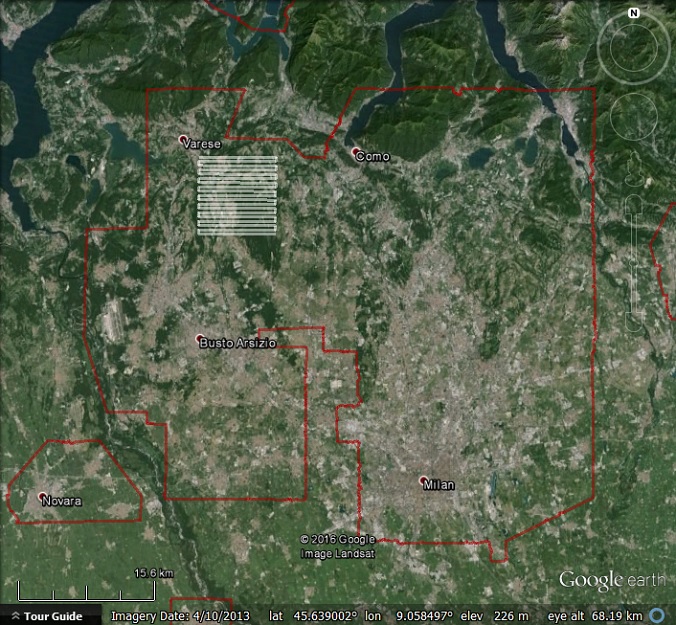 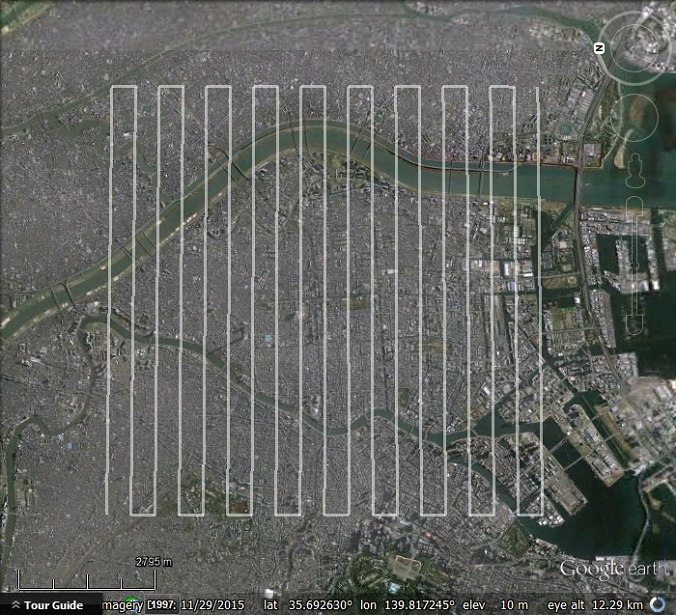 The zigzag shape we used. (This one is Tokyo, Japan). 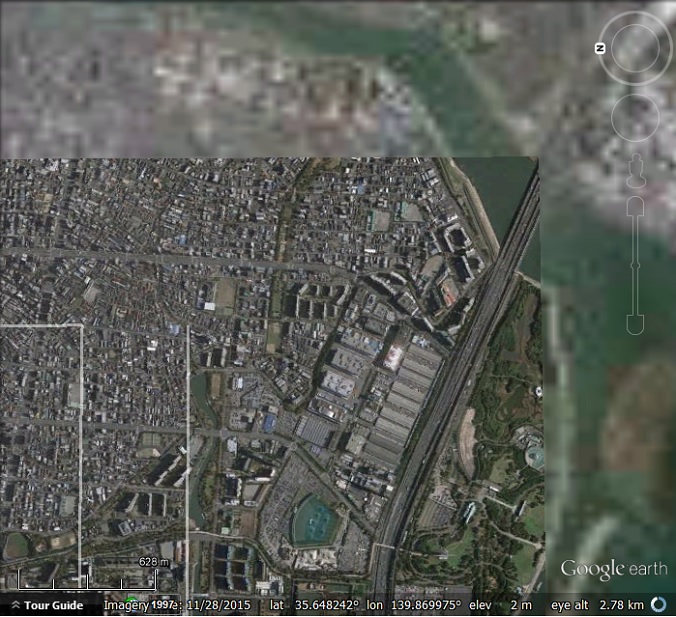 A corner of the area covered showing that only the area around the zigzag was fully loaded.

Here are the results for 100 square kilometres with a camera height of 1 km.

The surprise is the wide variation from location to location. The area near Milan, Italy, uses four times as much data as the area near Abilene, Texas. The figures for plain imagery are much more consistent. All the areas tested have aerial imagery. In a later post we will have a look at whether or not there is a difference between aerial and satellite imagery.

The second surprise was just how much data 3D buildings require. We ran a test from a height of just 300 m over an area of just 20 square kilometres and it filled up 2,230 MB of cache, so the figures above are actually much smaller than if the best resolution imagery possible is loaded. The single area around Milan, Italy that has 3D imagery is approximately 2,500 square kilometres so it requires approximately 278 GB of data. That’s about the same as a small hard disk drive.

To see the zigzags we used in our tests, download this KML file

, and to see what parts of the world have 3D imagery download our KML map

This is the first in a series of posts trying to work out just how much data is in various aspects of Google Earth. If all goes according to plan, we should, at the end, be able to make wild guess at just how big the Google Earth database really is.