Although the Google Earth API was officially deprecated back in December 2014, Google chose not to shut it down on schedule in December 2015 and have instead kept it running. Although you should not design websites around it as most browsers no-longer support the technology it is based on (NPAPI), it can still be a very useful tool for particular purposes.

Today we are sharing a tool based on the Google Earth API that we developed for our own purposes, but think others might find useful. If you have a collection of placemarks and want to know whether or not Google Earth has relevant imagery, rather than switching to ‘historical imagery’ then checking them one by one in Google Earth, this tool can do much of the work for you.

As an example of what it might be useful for, we took this page on Wikipedia that lists the locations of all the tornados in the United States from January to March 2016. We used the provided coordinates to create placemarks in Google Earth. We then used the tool to generate a new KML which shows which placemarks have imagery from 2016. 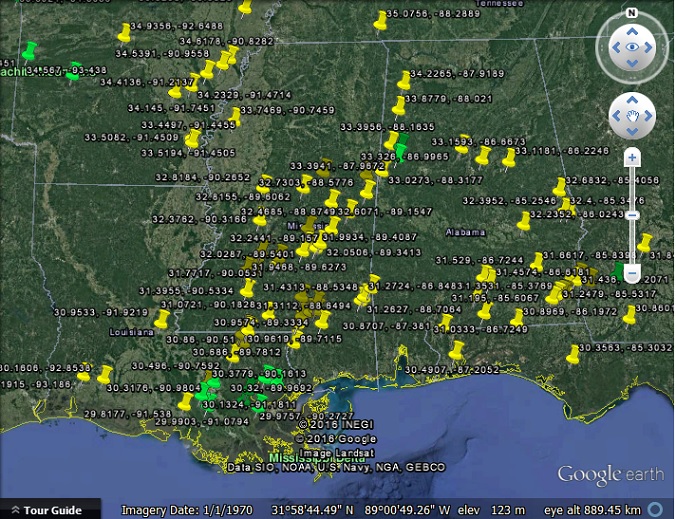 Placemarks with imagery from 2016 are highlighted in green.

It is not perfect in this particular situation as it does not tell us whether the imagery in question was captured before or after the particular tornado. To achieve that, we would have to find a way to include the tornado date in the original KML file. But it does considerably cut down on the number of placemarks we should check if we want to find signs of tornado damage. You can get the above KML file here. Keep in mind that many of the tornados were very week and did almost no damage.

In order to use this tool, you need to open this page in Firefox which, as of this writing, still supports the Google Earth API. The first time you open the page, you must click the link that says ‘Activate Google Earth’, then choose ‘Allow and Remember’ in the popup. Then refresh the page.

Next, select the KML file containing the placemarks you want to use, and enter a date in the space provided and click “Get Dates”. The tool will check the latest imagery date for each location and when complete will download a KML file which you can view in Google Earth. Note that each placemark takes two seconds because we find that the Google Earth API is a bit unreliable if rushed. The resulting KML file includes all placemarks from the original file and puts the date of the most recent imagery in the placemark description. In addition, it colour-codes the placemarks yellow and green depending on whether or not the latest imagery is before or after the date provided below.