The article covers three very different projects that Google is involved in that use technology and maps to achieve sustainability goals. Our first thought when we see maps of this nature is always – can we get the data in Google Earth? In all three cases it appears that the data has not been published in a Google Earth friendly format. We thought it would be worth asking – why not? 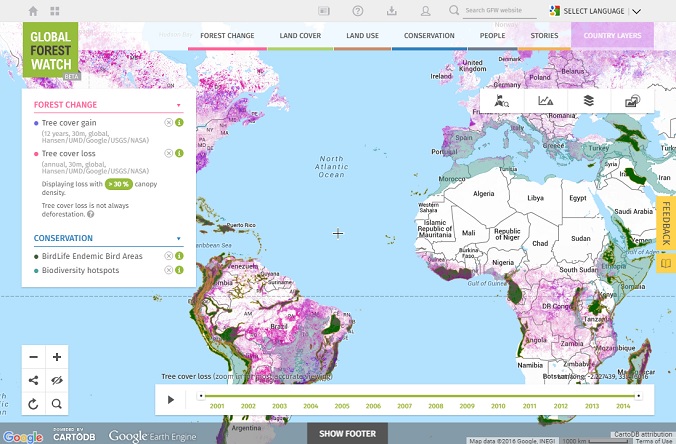 Global Forest Watch has a wealth of data and much of it is open data that you are free to download. We looked up one of the datasets which is provided here by the University of Maryland. It turns out that the data is in four different bands, each totalling about 600 GB. Just downloading a 10 degree square of one band can be as large as 600 MB. So although it would certainly be possible to publish a very low resolution version for Google Earth, it would not really be feasible to provide the full data as a single KMZ file. It is possible to serve such large data sources to Google Earth, but it is not a trivial exercise. 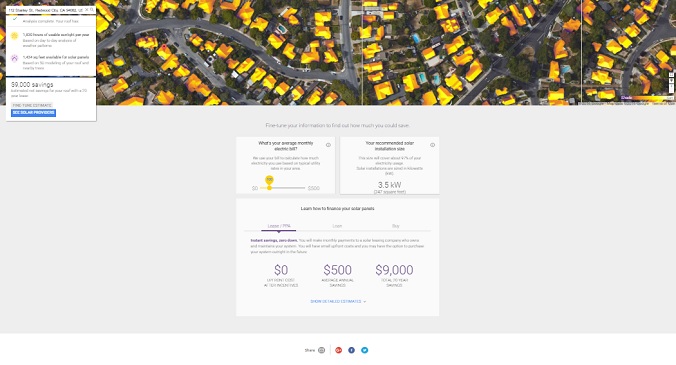 Project Sunroof uses Google’s 3D imagery to calculate the orientation and area of you house’s roof and combine that information with the typical amount of sunlight in your area, your average monthly electricity bill and state and federal incentives to give you a set of quotes for different financing options for your solar installation. It is currently only available in certain parts of the US and only where there is 3D imagery. Although Google’s 3D imagery plays a part and mapping data is a critical part of the application, it is ultimately more of an application than a map. It would certainly be possible to implement it with Google Earth rather than a website, but there would be no significant benefits to doing so. It would be nice to see maps of the data, such as average sunlight, state subsidies, etc, but these could presumably be obtained from other sources.

It would also have been nice to see the 3D imagery in Google Earth with the roofs painted different shades of gold to indicate the amount of sunlight they receive, but as we saw last week, Google’s 3D imagery is not a small amount of data and adding an extra layer for it to Google Earth would not be a trivial exercise.

This is a project Google is doing in collaboration with the Environmental Defence Fund (EDF) using the Street View cars to gather data on methane levels in the air. This makes it possible to identify leaks in natural gas pipes. In this case the presented data is fairly straightforward map data and could easily be presented in KML format. Sadly a KML option is not offered. It is possible to obtain the raw data by requesting it on this page but we were unable to find any source of the processed data available for download.

So in conclusion, we believe that having a KML download option should always be considered when you have mapping data you wish to provide to the public, but there are clearly projects where it is not a trivial exercise. We do hope that the EDF or Google consider presenting the methane data in KML format.

We applaud Google’s work in using their technology and resources in the above sustainability efforts, and if you haven’t already, we highly recommend reading the article about the three projects.