We recently did several posts about drawing contours using altitude data from different Altitude API services. The first version used the Google Maps Elevation API and the second used Mapzen’s elevation API. The biggest problem was that the API’s are throttled, in Google’s case, to stop abuse and in Mapzen’s case due to limited server resources. Mapzen recommended that we instead switch to using a different method for getting the altitude data from them. They provide the option to get the altitude data in the form of tiles similar to the tiles used in various online maps, but with just altitude data. So, we decided to try it out.

We expected some improvement in speed, but it turned out to be a much faster method than we expected and works very well. The tiles are 256 x 256 points of data and we use one to four tiles, depending in the location chosen. The previous method using the elevation API took about 40 seconds to retrieve 100 x 100 data points, but the new method gets all the data in a couple of seconds despite getting many more data points. In fact we found it was so fast and because it was allowing us to get so much more data, what was taking the time was calculating the contours. So we did some work on optimising that code and managed to get that quite a bit faster too. It can still take a little time if you ask for too many contours close together.

In Google Earth with 3D imagery turned off, Sugarloaf Mountain is entirely at sea level, but the Mapzen data results in reasonably accurate contours of it.

The faster data access allows us to draw more detailed contours than before.

Note that we automatically zoom in or out depending on the size of the area you choose. We could, if if we choose produce much higher resolution contours in most instances although it would take a lot longer to calculate. We chose not to as this is just a ‘for fun’ project that we haven’t really found a use for. If any of our readers has a specific use for it and does require higher resolution contours, then let us know in the comments and we will consider adding that option.

Using it is similar to last time. Just draw a polygon of the area you are interested in, save it as a KML, upload it here, select the desired options then click ‘Draw contour’.

Last week we featured a tool for drawing contours which uses the Mapzen altitude API. We used a very simple algorithm called ‘Marching Squares’ that we found on Wikipedia. However, as GEB reader Боби Димитров pointed out in the comments, if you try to use too low a resolution altitude grid relative to the number of contours you want, you end up with something looking like abstract art: 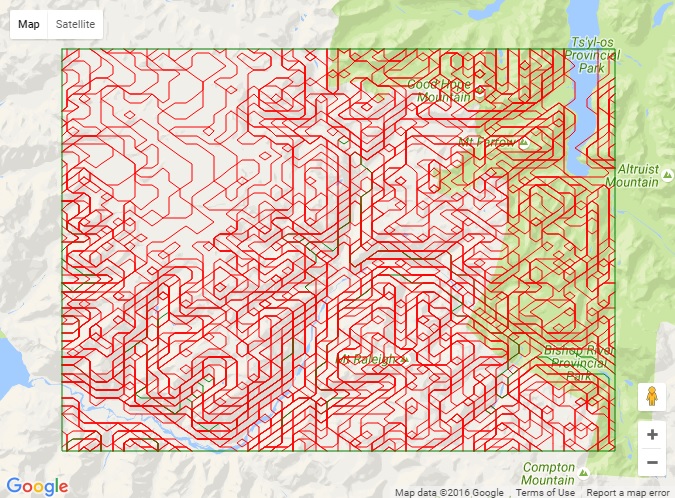 The Marching Squares algorithm is remarkably simple. We just check every altitude from the grid obtained from the Mapzen API and colour it red or green based on whether it is above or below the altitude of the contour we wish to draw. Then we draw lines separating the two colours from the mid-points of the rectangles in the grid as shown below: 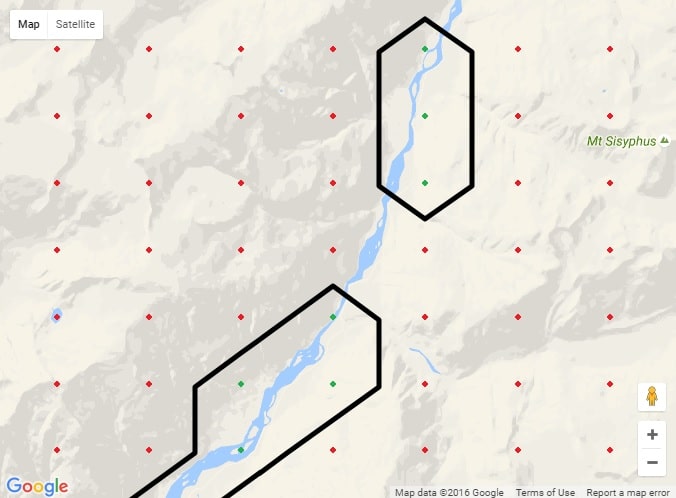 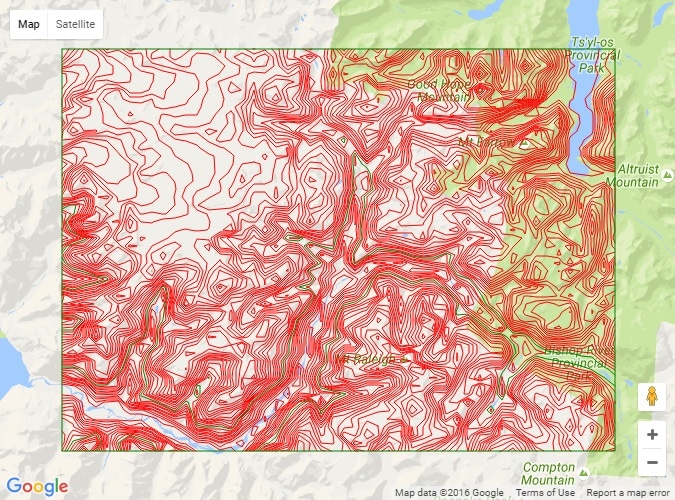 All the settings were the same as the ‘abstract art’ sample above, except we used proportional ‘mid-points’ on our squares.

And best of all, it only required changing one line of code!

We have also tried smoothing out the contours using this open source code. It generally works well, but it tends to result in some unwanted loops, so we probably need to look for a different curve algorithm.

Our next step will be to use a different technique to access the elevation data from Mapzen, as suggested by them in the comments. If successful, it should allow much faster access to the elevation data – and thus higher resolutions will be possible.

The changes so far have been added as options in last week’s post.

Last week we had a look at drawing contour lines using the Google Maps Elevation API. Because of restrictions on what you are allowed to do with Google’s elevation data, we chose not to create KML files from it. We have since talked to another elevation API provider, Mapzen and they assure us that they use open data from USGS and NOAA and we may do whatever we like with it.

Google’s elevation data, as used in Google Earth is higher resolution in many locations than the Mapzen data because Google also has access to the USGS and NOAA data, but have supplemented it with other sources that are not as open.

Here is an example of what is possible with the new version of our tool: 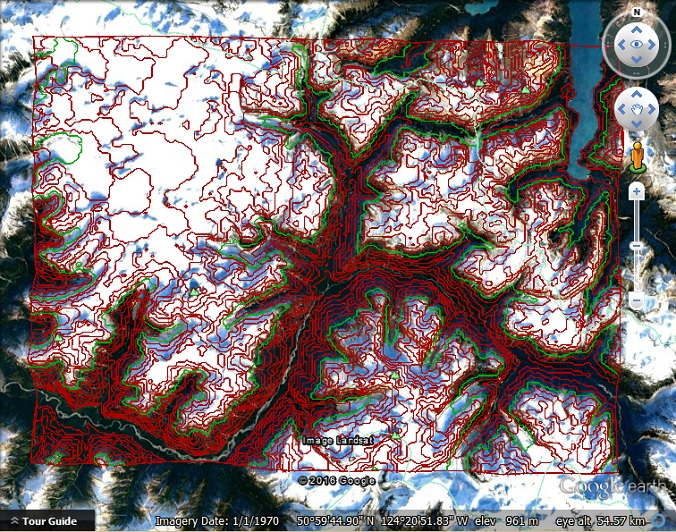 To try it out with default settings, just click the ‘Draw Contour’ button and see what happens. The default settings should take about 30 seconds to complete. When it is done, it shows the result in the Google Map below as well as downloading a KML file, so you can view the contours in Google Earth.

To use it with your own settings, draw a polygon in Google Earth of the approximate area you are interested in, save it as a KML then select it below. If you do not select a KML file then it will default to using an area in British Columbia, Canada that we selected for its very mountainous terrain.

You can choose how many rows and columns of altitude data to obtain. The Mapzen elevation API limits the number of queries you can make in a given time to prevent individual users from degrading the overall system performance, so very high resolutions take a long time. Remember that doubling the rows and columns will take four times as long to complete.

[ Update: Also see this post regarding improvements we made to the algorithm. ]

If you don’t like the styling of the contour lines in the KML, you can change them in Google Earth from the properties of the containing folder rather than having to modify each individual contour.

Let us know in the comments if you find any bugs or have suggestions for improvements. We would also love to know if anyone finds this tool useful for anything. 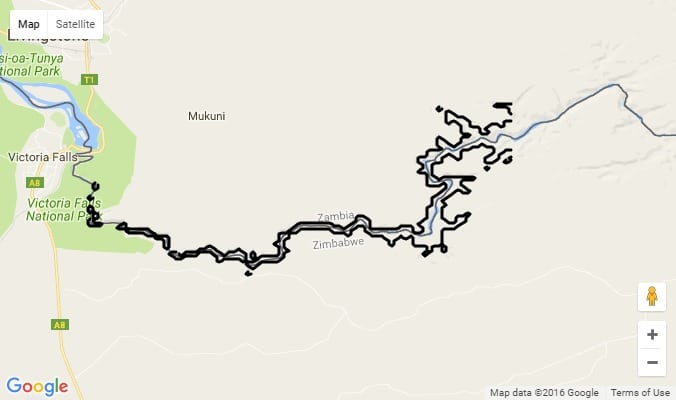