We recently had a look at it as part of our Google Earth plugin showcase and we pointed out that the original version is broken due to a change in the URL to the Sketchup Warehouse model it uses. However, we were able to fix the bugs and you can try it out here.

Now the developers of Cesium, a JavaScript library for creating 3D globes and 2D maps in a web browser without a plugin, have ported the application to Cesium in order to help promote it as an alternative to the Google Earth plugin, which was recently deprecated by Google.

You can try it out here. 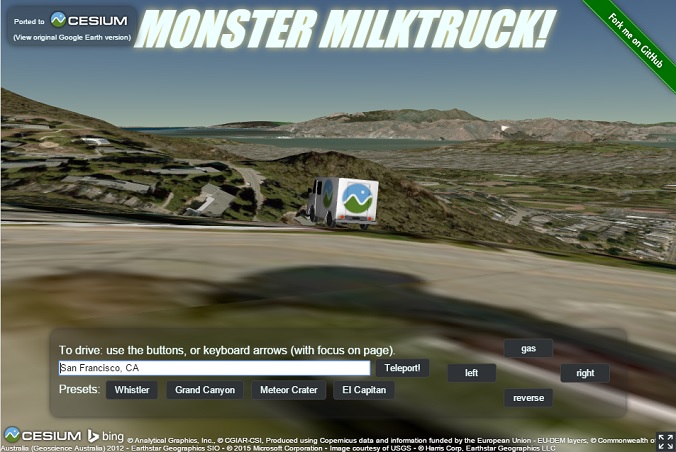 We found the performance to be quite impressive. It has global satellite imagery and terrain data based on Bing maps. It does lack the 3D mesh that we are used to seeing in Google Earth, but even Google Earth is far from achieving global 3D coverage. We did encounter a bug when teleporting to New York. It placed our milk truck under the surface of the globe and we could not get out without teleporting somewhere else. But we believe that is a bug in the Monster Milktruck code and not a problem with Cesium itself. Cesium uses WebGl and we found that it did not work on a 6 year old laptop. This could possibly be resolved by updating the graphics card drivers, but keep in mind that Cesium may not work with older hardware.