Earlier this week we showed you our historical imagery density map. Looking at the map a number of hotspots are immediately apparent. However, many of these hotspots result from anomalies in the way the Google Earth plugin reports the information, as well as the settings we used when collecting the data.

There are, however, some genuine hotspots that we were not previously aware of. Today we will look at just two of them.

The first is Maiduguri, Nigeria. A seemingly unremarkable spot when first looked at in Google Earth, it is estimated to have a population of over a million and is a key economic and education centre in the region. It has also experienced religious violence committed by Islamist group, Boko Haram – which is the main reason why it has so much imagery. For example, there was a bomb attack on one of its markets (known as ‘Monday Market’) on January 10, 2015, and Google Earth has an image captured two days later. Similarly, there were a number of other events relating to Boko Haram listed on the Wikipedia page and again there is imagery that was almost certainly captured in response to the events. However, we were not able to find anything in the imagery relating to the violence – partly because it is a large city and we didn’t know where to look and partly because the resolution is not very high and it is possible the events are not visible. 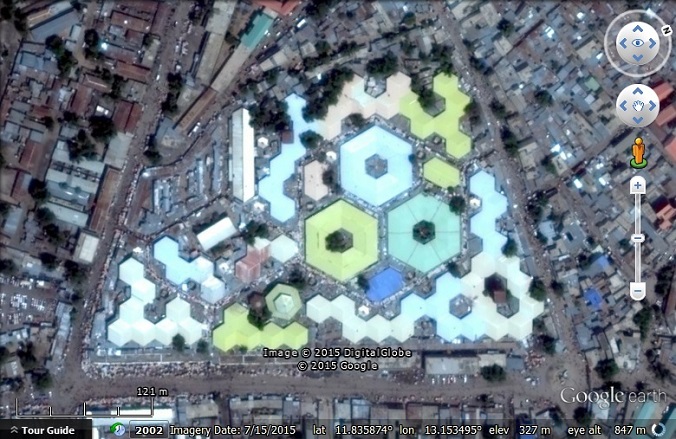 Monday Market is quite distinctive from above.

The second location is Calama, Chile. We do not know why it is of interest, but it has multiple images per month throughout the past two years. Both Maiduguri and Calama are in dry, largely cloud-free and snow free locations, which makes capturing imagery of them particularly easy. So what can we do with a location that has so much imagery? Animated historical imagery Tours of course! There is an open pit copper mine just to the north of Calama that would have made an interesting target, but it is just off the edge of most of the imagery. So we decided to have a look at the airport. You can download the tour as a KML here

, but you may find it rather slow and boring. Speeding up the Tour in Google Earth results in it skipping some images, so instead, we recorded it and sped it up to create the YouTube video below.

Watch the main building roof being completed in the early part of the video.