On Friday we looked at a view of the earth at night created by NASA. Today we are looking at another map created by NASA called Blue Marble. We have looked at NASA’s Blue Marble images a number of times before. The early versions of Google Earth looked very patchy, just as it does today when you turn on ‘historical imagery’. Frank used the Blue Marble images to create a KML that could be used to make the Earth look better when viewed from high altitudes. Since then, Google has used similar techniques to achieve the same effect and built it into Google Earth.

If you want to see the Blue Marble images today, the easiest way is to download this KML file

, which comes from this map posted by NASA in the Google Maps Gallery. It includes twelve layers, one for each month of the year. There are downsides to using the version from the Google Maps Gallery. You cannot save the map to your ‘My Places’ and the KML cannot be used as part of a larger KML so it cannot easily be animated as Frank has done previously. It would have been nice to do a new animation using the Maps Gallery version, as it is higher resolution than the ones Frank used, and is regionated, which improves performance. High resolution images of the maps can be obtained from NASA’s website, but they are quite large. 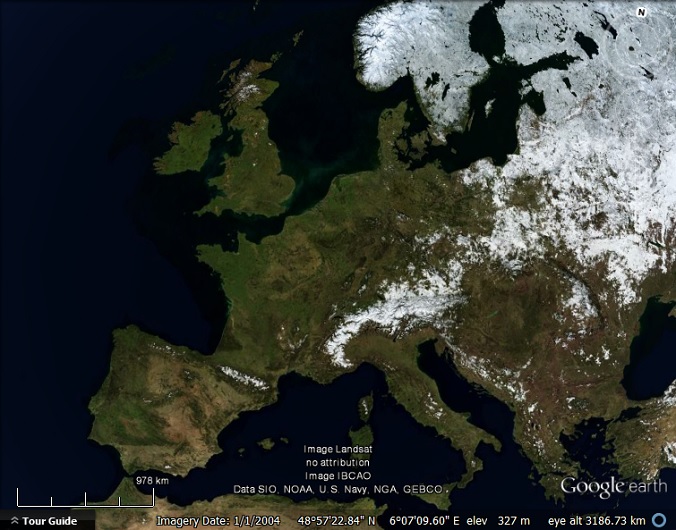 Ever since Frank put together the “Blue Marble” overlay, it’s been one of my favorite overlays for Google Earth. I leave it on almost all the time, because it creates such a nice view of the earth when seen from very high altitudes.
Of course, the Blue Marble only shows how the Earth looks right now. What if you could see the past (and future) of our planet with a similar overlay? That’s what the folks at ZHAW have put together, and it’s quite impressive. They’ve created a few animations that show changes in the Earth’s glaciers, vegetation and sea levels throughout the years. Here’s a look at their “Blue Marble 3000” animation, which begins 21,000 years ago, and ends in the year 3000.

They also have a version of it that starts with present-day Earth and goes until the year 10,000:

In addition to the views, they’ve created overlays that you can use inside of Google Earth. You can find more info about Blue Marble 3000 here, and Blue Marble 10,000 here.
They collected the data from a variety of sources, and certainly had to make some estimations for future ice and shorelines. Still, it’s an interesting look at where we’ve been and where we might be heading.

Google Earth provides some amazing imagery of the earth, but as most of you know, the wide view of earth isn’t the greatest due to the patchwork of imagery across the globe. Fortunately, back in 2006 Frank released the Blue Marble, which uses beautiful imagery from NASA to show off the earth. NASA imagery shows a different image for each month of the year so you see a cloudless representation of the earth with vegetation colors and snow/ice as seen from space for that month, and the file below shows the current month. 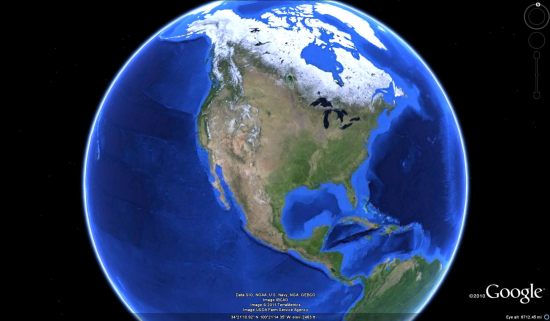 The Blue Marble allows Earth to look more realistic when viewed from space, but the file automatically hides itself as you zoom in so that you can still see the sharp satellite imagery on the ground.
Due to some issues with the file locations, Frank recently had to update the file. While he was in there he made some nice tweaks to it, including removing the old cloud images. The result is a great-looking, lightweight file to make Google Earth look excellent! Frank had hopes Google would someday add such a feature into Google Earth, but there’s no sign of that yet. Best viewed if you turn off other layers like the Borders layer so it looks more like the view from space. You can also turn on the Weather->Clouds layer and the View->Sun menu option to add realism.
To try it for yourself, simply download this KML file

and that’s it! Thanks to Frank for continuing to maintain such a great add-on.
You can also view a Blue Marble time animation Frank created that shows all 12 months of the Blue Marble in Google Earth.

add-on overlays a beautiful image of the Earth created by NASA, called the Blue Marble Next Generation, when viewing Google Earth from space. When you get get closer to Earth the blue marble will fade away so you can see Google’s satellite and aerial photos. This version of the Blue Marble add-on has some big improvements. You must be using the latest GE 4 (version 4.0.2413 or greater) for it to work properly. You can also turn on the real-time Global Clouds overlay in the folder (updates automatically every three hours). The clouds are turned off by default so it loads fast when you first bring up Google Earth. This version works much better as it uses built-in features to KML 2.1 to detect when to fade on and off the images. The version we published last week used a network link to communicate to a server to work properly. Move the “BlueMarble” folder to your “Places” to keep this around permanently. By the way, you will see a different version of the Earth each month – see this Blue Marble time animation for more information. Try this out, and see if you agree with me that Google should implement this for Google Earth!
Here’s a video demo of the new add-on:

END_OF_DOCUMENT_TOKEN_TO_BE_REPLACED

Probably my oldest and most-wanted feature-request for Google Earth has been to show NASA’s beautiful Blue Marble images for the Earth when zoomed out. Several months ago I actually went to the trouble of figuring out a way to do it using network links which would be elegant to use. I asked Barry Hunter, who has implemented lots of interesting “add-ons” for Google Earth at his Nearby web site, to help implement a solution. Unfortunately we ran into a couple of problems at the time and never published it. Plus, I was told by some of the GE team members they would “probably” implement something themselves. So we’ve been waiting. Well, nothing from Google yet, so now we’re releasing a working version of our concept. And, it works even better than we expected!
Basically, all you have to do is load this Blue Marble and Clouds network link

. It loads up NASA’s Blue Marble NG image for November and the current global clouds. When you zoom down to look at the Earth more closely, the clouds and BMNG image fade away. When you zoom back up, they come back. This is the kind of thing Google should implement built-in to GE. And, thanks to the availability of BMNG images for each month of the year, they could show the right image for each month of the year. By the way, you can turn off the clouds or the BMNG image overlay if you want and just use one or the other and it all still works. I like the BMNG image by itself.