Mount Etna in Sicily is a beautiful mountain, and has seen an increase in volcanic activity in 2013.  Captured on April 18 by NASA’s EO-1 satellite, the image below shows the mountain in it’s eleventh paroxysm of 2013.  In the image you can clearly see the ash cloud on the left, and fresh lava flows on the right side of the mountain. 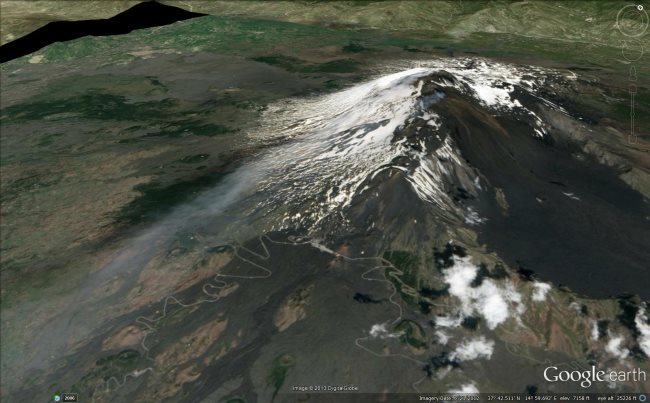 Located roughly 25 kilometers (15 miles) north-northwest of Sicily’s second-largest city, Mount Etna is a stratovolcano composed of layers of rocks, lava, and volcanic ash left by earlier eruptions. The summit reaches an altitude of 3,330 meters (10,925 feet) above sea level. People have lived around Etna for millennia, so scientists have one of the longest documented records of activity of any volcano in the world—dating back to 1500 B.C.

To see it for yourself, you can view imagery on the NASA Earth Observatory site or download this KML file

to be taken directly to the mountain in Google Earth with the image overlay in place.