A couple of weeks ago we set up a server that allows you to view the NOAA’s post Hurricane Matthew aerial imagery in Google Earth. The imagery comes from the NOAA’s map, which provides the data in tiles. For more on how tiled maps work see this post.

The experiment worked better than we expected, so today we are expanding it to use Mapzen’s altitude data, which we have previously used for drawing contour lines. 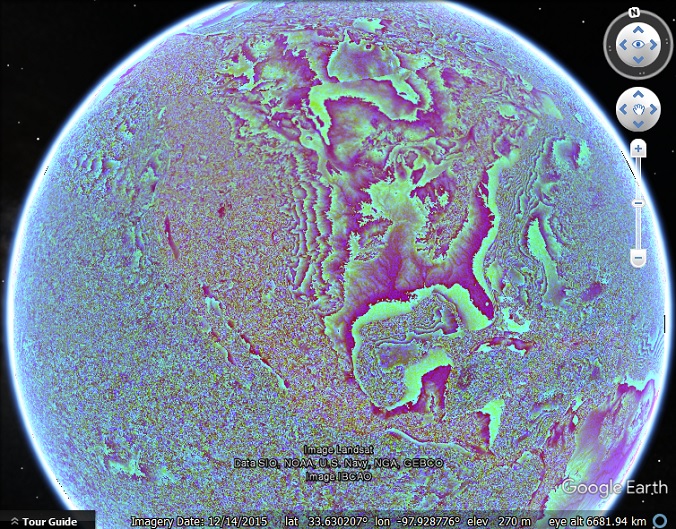 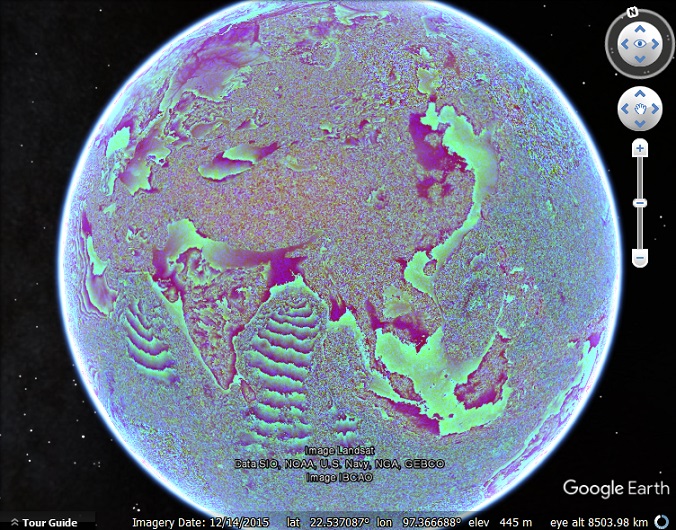 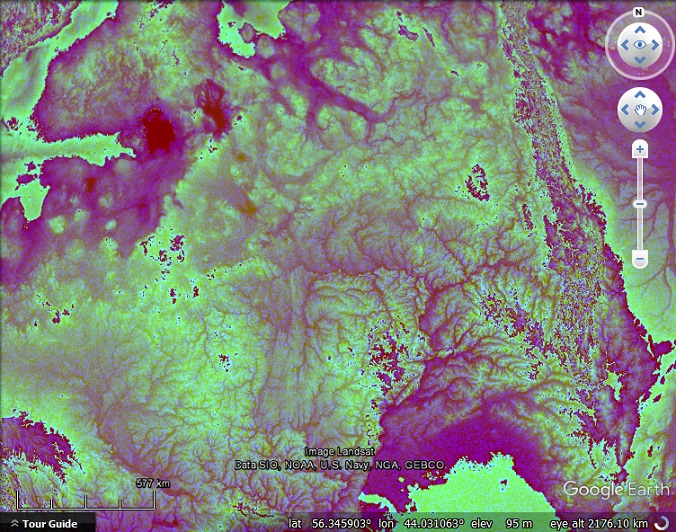 It is not perfect, and you will notice the imagery shift slightly north or south as you zoom in. This is because the tiles are in the Mercator map projection which stretches the map in the north-south direction, especially towards the poles. However, this effect is less significant as you zoom in.

Yesterday we made some Google Earth tours of various US parks. We recorded the tours using Google Earth’s built in ‘Record a tour’ button on the tool bar and then navigating with a SpaceNavigator 3D mouse. Everything seemed fine until we played back the tours and found that some of them have bumps in them and occasionally some have quite severe up and down jitter. We found that these effects were actually part of the tours as they would occur in the same place when played again.

Our first thought was that not all the terrain had loaded properly when the tour was recorded. Thus Google Earth recorded the wrong altitudes when recording the tour, and when playing it back new altitude data is available, so it looks wrong. After much investigation, we do believe that is the main cause of the problem, but that there are other issues as well.

We thought it would be interesting to try and fix the tours by using some maths to smooth out the altitudes. However, we found that because of the way the altitudes are stored in the tours, smoothing them out may be difficult or impossible. Google Earth can store altitudes in two basic ways: relative to the ground (or sea floor) or an absolute measurement (from sea level). A third option is to leave out the altitudes and have objects automatically clamp to the ground level. The difference between relative altitudes and absolute altitudes is not always obvious, but in some cases it is important to get it right. We had a problem with this in the past when we created a script to draw arcs. If we used absolute altitudes the ends of the arcs ended up all at a fixed altitude instead of ground level, and if we used relative altitudes then the arcs were not smooth but included all the bumps from the ground below them. The eventual solution that we came up with was to use absolute altitudes and read the end point altitudes from Google’s Elevation API.

In the case of the tours, we found that they are being stored as relative altitudes, which is a problem, because we cannot smooth them out without knowing what the ground altitude is at each point. Oddly enough, this contradicts what it says on this page, which states that Google Earth uses absolute altitudes for tours precisely because of the problems we are experiencing.

As we noted in this post, when viewing areas with 3D, Google Earth shows the altitudes from the 3D imagery in the status bar. So the first thing we wanted to do was determine whether or not relative altitudes in Google Earth are treated as relative to the default terrain at all times, or whether it uses the 3D imagery where available. What we found was surprising.

The two scenes below illustrate what happens. In both cases we have some lines set to a fixed height relative to the ground: 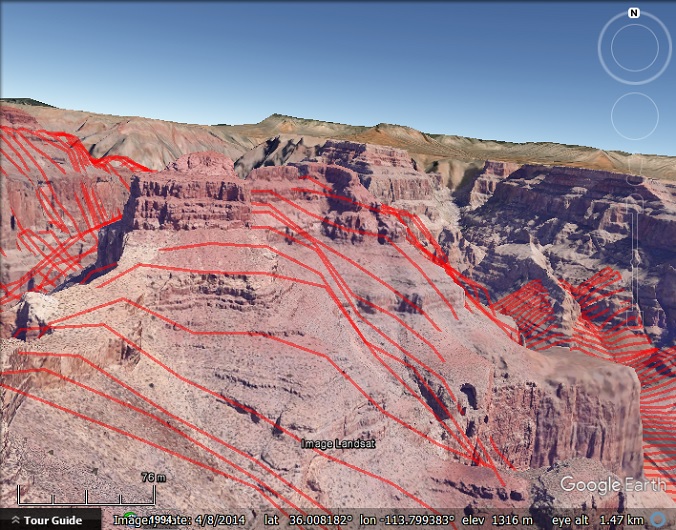 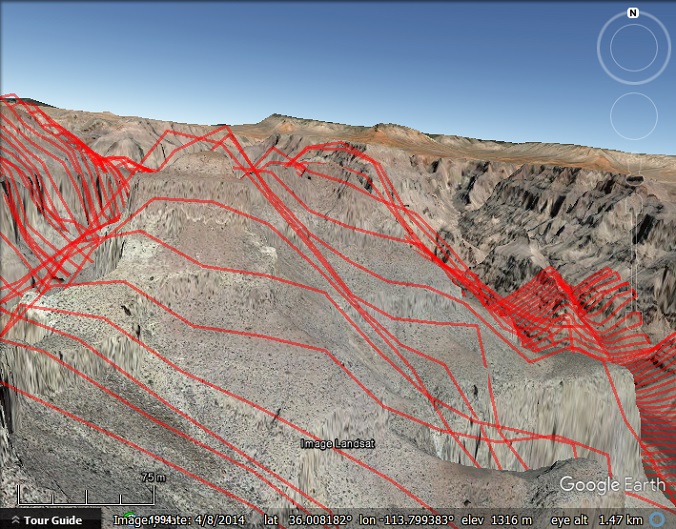 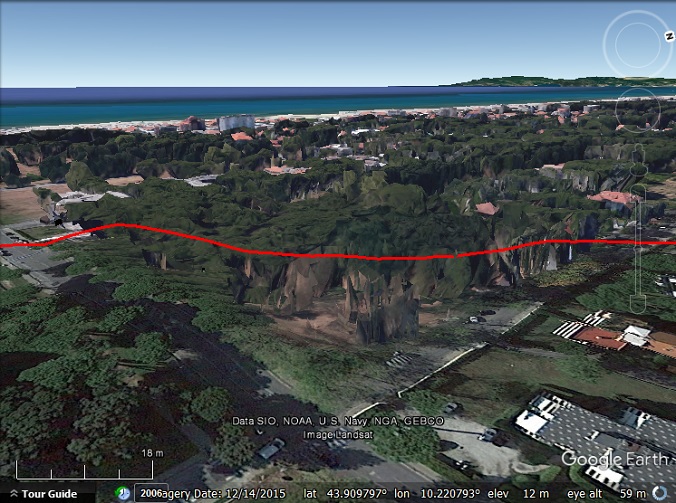 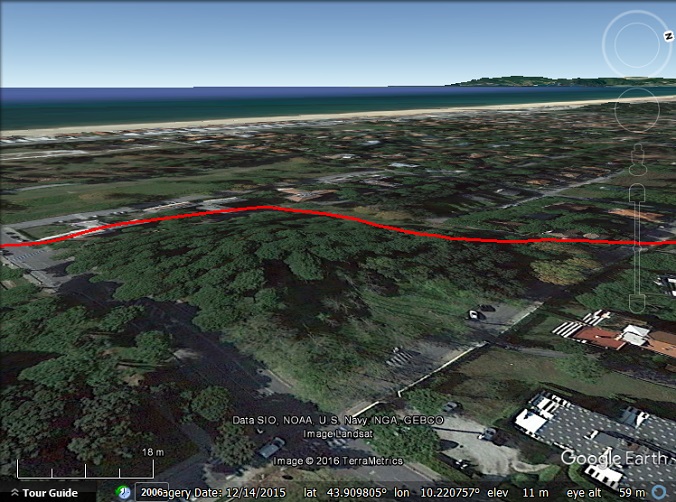 In addition to all this we encountered one or two places where Google Earth couldn’t decide what the correct altitude was. If we had a line with a relative altitude set, it would jump between two different heights, depending on which direction we looked at it. We believe this is the cause of the worst of the jitter we experienced in the tours.

We still don’t have an actual solution to our problem. 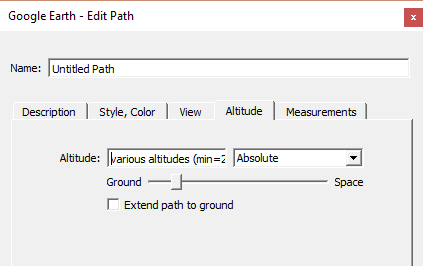 Thank you to GEB reader ‘jonahtornado’ for letting us know that Google appears to have got the altitude wrong in the 3D for the Italian city of Crotone. If looked at in Google Earth with the ‘Water Surface’ turned on it appears to be underwater.

It is actually not uncommon for 3D imagery to have a slight difference in altitude between it and the Google Earth default terrain, which results in a visible step at the edge of 3D regions in some places. Being near the coast, however, has resulted in most of the city being below sea level, which makes for quite an interesting effect. For best results turn on “Use photorealistic atmosphere rendering” found in Tools -> Options. 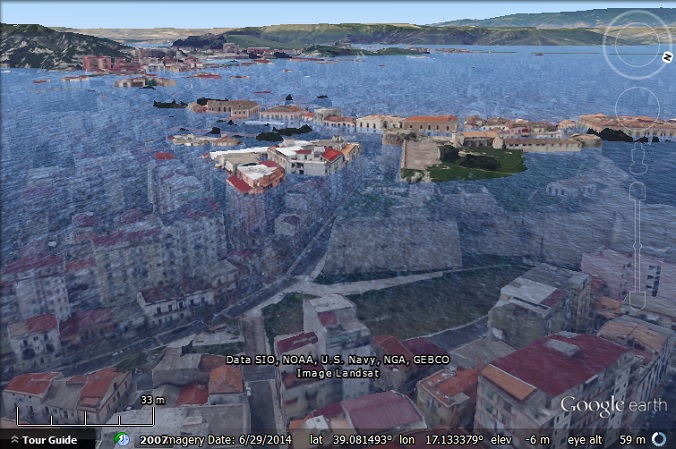 Use this KML file to fly straight there in Google Earth. 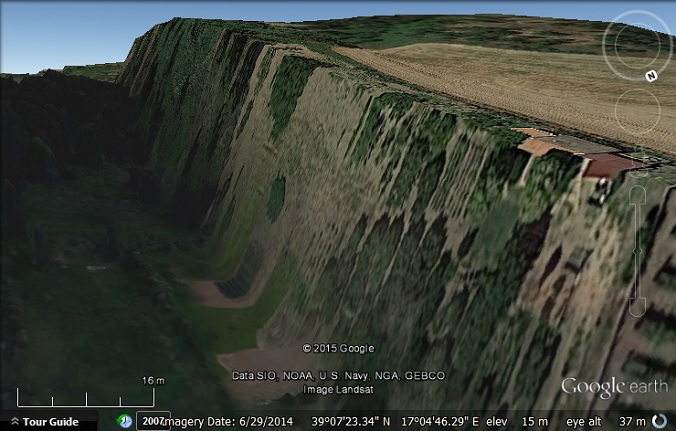 The ‘cliff’ where the 3D imagery meets default terrain is about 30m high.

According to our KML file the above 3D imagery was added to Google Earth in December 2014.