Google Earth 5 introduced a powerful new feature called “Record Tour“. In its basic mode it lets you hit a record button and record actions in Google Earth so you can share what you see. You can also record voice over narration with your tours. The Tour function is even more powerful if you delve into the Tour documentation, and much more powerful if you learn how to program Tours in the KML directly.
Richard Treves has been reviewing the new Tour functionality from a user perspective as a design specialist. He has made several posts commenting on the good and bad of the new Tour function in GE 5 (see his posts: one, two, three). In his last post, he adds historical imagery changes to a tour. Richard compares one of his tour to the tour I generated during my first review of GE 5’s Tour function.
From a developer perspective, Brian Flood of Arc2Earth makes some interesting comments about the power of the Tour function in GE 5. He notes that you can have independent camera track and focus points (like a cinematographer), and you can control the speed of playback as well. Not only that, but he comments that he’s considering making a new application to produce more sophisticated tours. I’m looking forward to seeing what he comes up with based on his excellent work with Arc2Earth.

If only I had known – I might have changed my plans and made my way to the Google Earth 5 launch. They actually had Jimmy Buffet help make the GE 5 announcement. Probably the most liked musician by sailors around the world, Jimmy Buffet is a legend. Did I mention before that I’m a sailor? Appropriately enough, Jimmy was helping launch Google Earth 5 in large part because of the new features for the oceans. They created a special recorded tour which you can play back with Google Earth 5 which gives a tour of Hawaii and Jimmy Buffet’s upcoming concert tour there. In the background is a classic Jimmy Buffet song as you fly around the islands and swoop through the oceans. 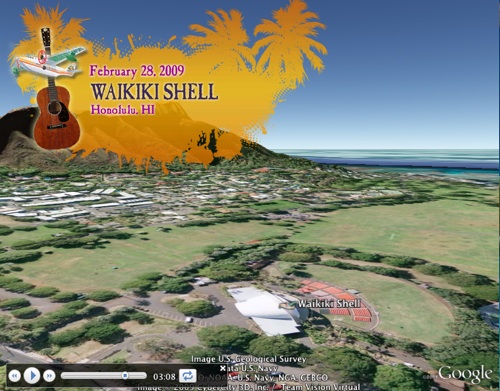 (with Google Earth 5, 8 Mbytes). Once it loads in GE 5, double click on “Jimmy’s Tour” to start it. Make sure you turn up your sound for the music!

Google Earth 5 was released on Monday February 2nd. Overall, it appears the reaction globally has been very positive. Lots of excitement over the four major new features: Ocean, Recorded Tours, Historical Imagery, and Mars. Many other significant features have been discovered in the last two days especially for developers.
Here are some notes on initial reactions so far to Google Earth 5:

For Google Earth developers, here are a few reactions:


Developers should also make sure to check out these posts: (GEB, OgleEarth 1, OgleEarth 2, GoogleGeoDeveloperBlog).

EveryTrail, the popular GPS track and geotagged photo site, has already announced support for the new tour option in Google Earth 5 (obviously they were beta testers). EveryTrail already has a layer in Google Earth. Now, they offer the ability for folks to upload recorded tours showing off their EveryTrail travel logs.

In their announcement EveryTrail listed several examples. But, my favorite was the one of a hike up Half Dome in Yosemite Park, California. (I made the same hike many years ago). All you need to do is have Google Earth 5 installed, and then load their Half Dome Tour

(UPDATE: You must be logged in on EveryTrail to load the KMZ now). Once it loads, double-click on the “half-dome-tour” recorded tour and it will start flying you through the hike and show you photos along the way. Awesome! Users could also add voice narration over the tours if they wanted.

Here are some useful places to go for tips with the new Google Earth 5. Google Earth 5 has some powerful new capabilities. Some of the most powerful features will only be initially accessible to developers. Here are a list of places to look for help (so far):

And, of course, keep an eye out here at GEB for occasional round-ups of new content created by developers for GE.
By the way, check out Virgil’s example of putting nautical charts onto the ocean floor 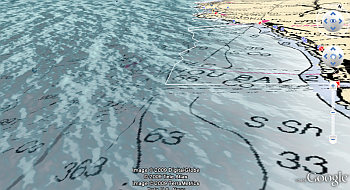