A few weeks ago, Oliver Davis, who is CEO of Concept3D (which does 3D modeling for Google Earth for one thing), took a holiday trip to British Columbia and went on a Helicopter Ski run. Being a savvy Google Earth user, he took along a GPS device and recorded his track both in the air, and while skiing down the snowy mountains. He got one of his engineers to produce a Google Earth 5 tour of the heli-ski GPS track which lets you fly along his trip. You’ll have to use your imagination for the sounds, and the pauses for putting on skis, and the strenuous, but exhilirating, runs down the mountain. But, you get to enjoy the views, and really get a sense of what a heli-ski trip would be like. Oliver posted about his trip and the tour at his blog, and they created a video showing the tour here:


To get the full experience, you should download their GE 5 tour file here

. Once it loads in GE, open the folder “OliversHeliTrip” and look for the “Tour” placemark. Double-click that to start the tour. NOTE: If you are prone to motion-sickness from watching fast moving flying scenes, watch out. If not, I suggest you can speed up the tour by using the fast-forward button during the playback. You can also grab the land with the mouse during playback to take control of the view so you can look in all directions (a very cool feature of GE 5’s tour controls).

Google Earth 5’s most powerful new features is the new Tour capability. At its most basic level Record Tour provides a fast and easy way for people to share with others a demonstration of some aspect of Google Earth and KML content, and the ability to add voice narration. (See a tutorial by Richard Treeves on creating basic tours). But, with a little KML coding, the Tour function allows much more powerful scripting of Google Earth demonstrations, 3D animations, movie-like camera action, and the ability to add professional audio overlays.
Here is a brief review of some of the early examples of Tours done with GE 5:

(By the way, don’t forget you can use the tour control panel (in the lower left) to control the playback – including fast forwarding, backwards, and pausing.)
These are all early examples just illustrating the potential. As GE 5 matures out of beta, and as these, and other developers, learn more about the capabilities. I expect there will be some amazing GE 5 tours in our future. Kudos to these early adopters of the technology!

WARNING: If you are prone to motion sickness – especially air sickness – you might not want to watch the following Google Earth tour!
This wasn’t the intention, but several people who have seen the tour have been a little queasy afterwards. The file is yet another demonstration of the capabilities of the new Record Tour feature in Google Earth 5. One of the engineers at Google behind the development of the KML standard and the open source libkml is Michael Ashbridge. He took one of the first GPS tracks of a hang glider (or paraglider) which was converted to a KML file (back in 2005) and wrote an application to convert the track into a GE 5 tour which lets you follow the glider as it catches thermals to gain altitude near some mountains in Idaho. Before I say more, just go check out the tour

in Google Earth 5. Once it loads, double click “Linestring Tour“. 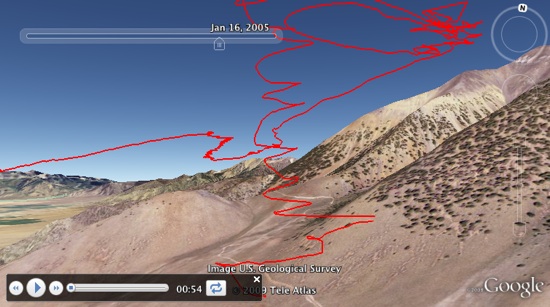 Michael’s program produced the tour by following the GPS track and shows you the 3D view along the “string”. It’s a really cool experience (if you don’t get sick!). GPS data is typically a bit inaccurate in altitude and only updated periodically (maybe once per second). But, the Tour function in GE 5 does a good job of interpolating between points to smooth the transitions. Even so, the ride gets a bit bumpy in places. The tour really gets interesting if you use the “Fast Forward” buttons on the Tour slider in the lower left.
While the tour is playing, if you grab areas with land with the mouse, you can drag your view to look in a different direction. After you let go with the mouse, the view will move back to following the track. This is a great feature which makes tours even more powerful because it takes a Tour from just being like a recorded video into a live 3D Google Earth recorded experience. But, there is a “bug” which doesn’t let you grab the sky to change your view (which will hopefully be fixed when GE 5 goes out of beta).