A few days ago, after the release of the large update to the Sky layers, I noticed some problems when trying to view the contents to some of the new layer folders. I would click on the “+” box to open the folder, but the folder didn’t open. After some experimentation it turns out that if you change the “View:” option from “Core” to “All layers“, then the problem goes away. Note: I had this same problem on both Mac and Windows versions of Google Earth. So, just change to “All layers” and you can view the layer folders like normal. 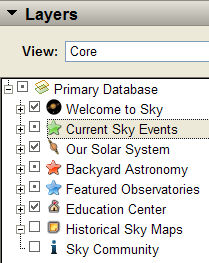 The bug has been reported to Google and they are working on a fix.

Google has made a substantial update to the layers for Google Earth’s Sky mode. Start up Google Earth 4.2, and select the “View->Switch to Sky” menu (or click on the button in the top middle to “Switch between Earth and Sky”).
The new layer choices look like this:

The new layers include a new “Welcome to Sky” layer which provides a series of placemarks to tour the different features of Sky. Double-click on the Welcome to Sky layer and look for the “Saturn” placemark icon. Open it up to see links to a couple of tutorials on using Sky.
There are some new layer folders like:

There’s a ton of new information in the new release. So, get out there and explore the Sky!
By the way, at the end of the “Welcome” tour of placemarks you get a placemark which links to James Stafford’s “Real-sized Planets” add-on. You also get a link to the fun “Han Solo Escapes” 3D animation Joey Wade and I did last fall.
NOTE: While I was writing this, Google released their announcement about the update to Sky. I’ve made slight modifications to reflect the new information.

The following are my favorite stories about Google Earth in 2007. In retrospect, Google Earth had a fantastic year both in terms of new features and data added, but also in the wide acceptance and influence the application has created throughout the world. There also were a lot of interesting finds in the imagery, and cool content developed by creative GE users around the world. The list is presented in chronological order – with a few comments for perspective.

Google has released some APIs from some space-related data they support. First, they added Maps APIs for Google Moon and Google Mars (both Maps-only available data – at least for the moment). And, they have released a Maps API for the Google Sky data (released last August) as well! See the announcement with examples at the Maps API blog by Michael Weiss-Malik. He also gives high praise to Michael Kosowsky of HeyWhatsThat.com. HeyWhatsThat now has a cool Cosmic Visibility page which uses the new APIs to let you see and understand the phases of the moon, and where the day/night is on Earth and Mars. It also shows you where the planets and day/night are in the sky. All using the new API. Very cool!
By the way, this new API was first leaked out through the Google Maps API forum (via OgleEarth). I met Michael Weiss-Malik at the Google booth at AGU, along with Noel Gorelick who was involved with the API development. They were pretty enthusiastic about the possibilities of the new API. The HeyWhatThat example is a pretty cool demonstration of the possibilities. 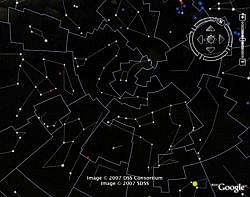 James Stafford, aka Barnabu, has posted a nice add-on for Sky which shows the constellation borders

for reference purposes. Turn on the Constellation layer in the lower left to see the stick figures of the constellations. Google should add a borders layer like this as a sub layer to the constellation (maybe in a future release). You can store this useful add-on in your Places pane. Simply drag it from your Temporary Places to it’s new location. I would recommend a Sky Add-ons folder, and also look at some of these other useful add-ons for Sky (several made by James):