I wanted to demonstrate the new feature in Google Earth 4.2 (just released today – download here) which allows you to view the night time sky from Earth. After downloading and installing GE 4.2, you simply select the new “Switch to Sky” button in the top center of GE (or under the View menu). This video gives you a basic demonstration of the new feature and shows you some of the beautiful views of galaxies, nebulae, and stars as if you had you own super powerful telescope:

Last night, Google pushed out a new beta version of Google Earth called 4.2 (download it here). Read the announcement here. This version adds a substantial new feature (many are calling it Google Sky) which lets you not only look down on the Earth, but also look up at the night sky and see the starry heavens through the perspective of the world’s most powerful telescopes. You simply click on a button at the top center of the new version and it switches to this new mode. Then, you can use the same type of navigation as always in Google Earth to zoom in and look at the stars, galaxies, nebulas, etc. of the universe. You also see a new set of layers on the bottom left which let you show/hide the constellations, and take tours of famous collections of amazing sights in the heavens like the Andromeda Galaxy, the Horsehead Nebula, the Ring Nebula, etc. Not only that, but you can use the same tools of Google Earth to placemark your own favorite places and share them with others. Simply click on the same control button in the upper center to switch back to Earth viewing. 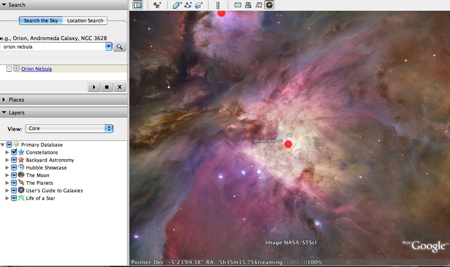 This new version also has support for new features announced at the Google Developers Day last May for a new KML version called 2.2, and it hopefully addresses a number of problems from the last beta version of GE 4.1, which most of you have been using for the past few months.
I will be doing a more thorough review of features during the course of the day. I’ve already found out that the new Sky feature does not (added in the latest version) support the SpaceNavigator. A big disappointment since it would be so much fun to fly through the sky with my favorite 3D mouse. In the meantime, read some more details on the new release from Stefan Geens at OgleEarth (who had the advantage of waking up 5 hours earlier than me).
Here’s a video I’ve put together showing the new Google Sky feature:


Also, here is a story with video showing the new photo viewer in GE 4.2.
Read on for more information on GE 4.2.