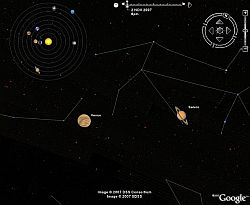 When Google Earth 4.2 came out with the new Sky mode on August 22, they included two layers called “The Moon” and “The Planets“. These layers use the time slider to show you the positions of the moon and planets in the night sky. The only problem is that the layers only included three months worth of prediction. So, on October 22 they no longer showed future data. Google realized the problem and posted a new update at the end of the month. Google mentioned that they are working on a way to automatically keep the layers updated. Don’t forget the nice add-on which shows a top-down view of the solar system while playing the time loop.

[UPDATED 16-Nov-2007: Updated placemark below to reflect new position of Comet Holmes – still visible to the naked eye, very noticeable with binoculars or a low-powered telescope! Also, added an image and link from Sky & Telescope which shows the positions of Comet Holmes over the next few weeks.]
A comet called 17P/Holmes, not normally visible to the naked eye, on October 24th suddenly burst a million times brighter. Scientists believe the comet is a ball of dirty ice which has cracked open and revealed new white ice which is reflecting the sun much brighter. The object is still dim to the naked eye, and it appears like a normal star. But, the fact it can be seen at all is highly unusual. Read more at Space.com.
Surprisingly few news reporters even mentioned how to find the star, or published the coordinates. But, I did find the coordinates and quickly made a placemark

so you can view the location in Sky of Comet Holmes. It is in the constellation of Perseus. I plan on checking it out tonight. We need to teach journalists to start publishing KML files to point out the locations of their stories – whether it be somewhere on Earth, or somewhere up in the sky. By the way, thanks to my friend Jim Scotti who is an astronomer at The Spacewatch Project. See a picture he took with a regular SLR digital camera showing the comet.
[UPDATE: I found it in tonight’s sky quite easily using the view from Sky. Amazing!] 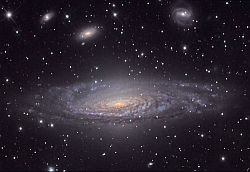 For a long time, I’ve been viewing the splendor of the universe on the web by viewing the web site Astronomy Picture of the Day which is hosted by NASA. In fact, the site had its beginnings in 1995, so it really has been a long time. And, with better and better telescopes, and enhanced digital image processing, the pictures from the heavens have only been getting more beautiful. This is one of the reasons Google Earth’s new Sky mode is useful (for showing these pictures). But, even with the large number of photos built-in to Google’s Sky mode, it has only begun to show a small portion of the photos already available. And, every day more photos are being taken. There are sometimes many different photos taken of the same location with different telescopes. Fortunately, with Sky, you can overlay other imagery of the same spot.
Put this all together, and Google Earth Community member ‘syzygy‘ came up with the great idea of doing a Astronomy Picture-Overlay of the Day for Sky at the GEC forum for Sky. He’s been taking photos from APOD and Space.com and overlaying in the appropriate point in Sky. You just view the attachments to see the images he displays in Google Earth. For example, here is an image of NGC-7331

(which came from Space.com’s image of the day) – astronomers say it is close to being the twin of our own Milky Way galaxy. (NOTE: after you “Switch to Sky” mode in Google Earth, you may have to double-click on the NGC 7331 placemark in Places to be flown to see it). Syzygy has a great idea with this thread of posts, but an even better idea would be to get Space.com and NASA to start providing a KML file image overlays for their imagery by default. And, having a network link which automatically shows all the photos available would be even better.

I’m attending the Annapolis US Sailboat Show at the home of the US Naval Academy in Annapolis, Maryland today. So, I thought I would start today with an interesting naval find in the new imagery for Google Earth released Oct. 2nd – and, I’m including a link to the boat show as well.