It’s been a long time coming, but Google Earth Blog has finally made the jump from Movable Type over to WordPress!  With over 3,000 posts (this one is #3005) and more than 17,000 comments, it was quite a migration.  In the end, this move should be good for all of us.  In particular: 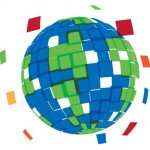 We’ve updated our logo to make it stand out more when you browsing around on line.

Comments will now be posted much more quickly, and replies can be threaded.  In addition, you can subscribe to email notifications for follow-up comments on particular posts, making it much easier to keep up with discussions that you’re a part of.

The site is now fully mobile responsive, meaning it should look great on your phone or tablet, as well as your desktop or laptop.  The previous site was mobile compatible, but was cumbersome on handheld devices.

Everything should load faster and run more smoothly for you.  Of course, we’re still ironing out the kinks after this major transition, so please leave a comment below or contact us if you come across any issues (missing pages, broken links, etc).

I get a few emails every day regarding Google Earth’s “historical imagery” feature, so now seems like a good time to revisit the topic. Frank first wrote about this new feature back in early 2009 when it was released as part of Google Earth 5. I’ll leave his content below, as it’s a great introduction to how it works, but first we need to discuss one oft-overlooked aspect of historical imagery.

Historical Imagery can be newer

We mentioned it back in February of this year, but it’s important to realize that the newest imagery in Google Earth can often be found in this historical imagery feature.
Google is very careful about the imagery that they release to the default layer. If new imagery is good (but not good enough), they’ll often it put it in the historical imagery layer. Reasons why it might not be “good enough” can be due to some clouds in the way, haze/pollution, sun at the wrong angle (lots of shadows), and things of that nature. Despite whatever minor shortcoming it may have, the imagery still may be of value to you, so be sure to check for it.

How to use the Historical Imagery feature

Google already had more satellite and aerial imagery available for free than anyone. Now, they’ve added a new feature to new Google Earth 5 that let’s you turn back the clock and see other imagery they have for locations around the world. Click on the little “Clock” icon in the upper middle (or the “View->Historical Imagery” menu item). A time slider appears (see below) showing available imagery. If other imagery is available in your current view, you see little tic marks on the slider. Drag the slider (or click the left/right buttons) to see earlier or (or even newer) imagery.

For example, here’s a shot of the famous “Bird’s Nest” stadium from the 2008 Beijing Olympics as it appeared under construction on February 17, 2007: 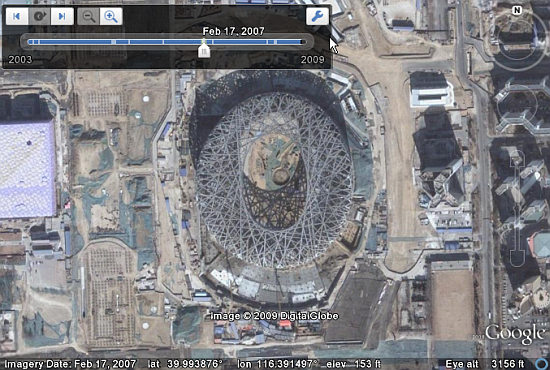 And, here is a video showing this all in action:

This feature is amazing! The amount of data Google is storing must be immense! Several instances of imagery for millions of square kilometers! You may be able to see how your house changed over the years, or see aerial pictures of cities from decades ago. Expect to see lots of posts on this new feature.
In addition, Google has put up their own post with examples of historical imagery in action.
(Originally posted Feb 2009)

Paul over at PlanetInAction is at it again. The man that brought us Ships and Helicopters has a new toy for us to play with. This is more of tech demo than a game, but it’s quite impressive.
He’s simply calling it a 3D sound demo. Here is a brief video of it in action:


You can read the full write-up on his site, but here’s the basics of it:

Multiple sound channels per sound source enables you to use different sounding audio files for nearby and far away. The “far” file should sound more muffled and have a longer falloff range. These audio effects can be prepared in a sound editor such as Audacity.

The helicopter on the beach is a great example showing how this works. Move in close and notice how the engine sounds louder but also sharper.

Be sure to check out the PlanetInAction site for more info.

Google has enabled another feature in 3D Warehouse to make it easy to share a specific 3D model. You can now embed your choice of either just an image, 3D view, or a Google Earth browser plugin view for any specific model (the latter only works if the 3D model is a GE placed model). You look below the model for the button “Include” to get your choice of embedding and the code snippet you copy/paste to your web site/blog (more instructions in link above).
The “3D View” option gives you a quick low-resolution look at the model. It loads fast, but doesn’t have much of the detail of the original model. The interface is very simple – drag mouse to rotate left or right, and use mouse scroll wheel to zoom in/out. That’s pretty much it. The view also doesn’t show the terrain or imagery from Google Earth. The “Google Earth” view uses the browser plugin to show the model in its saved geographic location (this option won’t appear for models unless they’ve been placed in GE). You could already choose the option to view the model in Google Earth, but now you can embed this way of viewing on your page through this simple option. One suggestion I’ve made to Google: I think they need to include the navigation gadget. Some people aren’t familiar with the basic mouse navigation moves to view a 3D model in GE.
For example, here is a model from 3D Warehouse of the Arecibo Radio Telescope in Puerto Rico by ‘mark s‘. First see it with the “3D View“:

And now with the “GE View” (which happens to show how accurate the 3D terrain is now in Puerto Rico):


Also, read this story about Gigapxl Photos with a video as well.