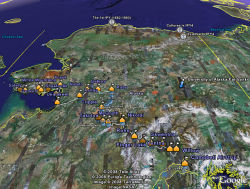 EarthSLOT, whose mission is “to advance earth science and earth science education through the use of on-line 3D terrain visualization and GIS tools”, has once again published a Google Earth file about the Iditarod Trail Sled Dog Race which is an 1150 mile dog sled race through the middle of Alaska. The race just started a few days ago, and the EarthSLOT Iditarod file

shows the route of the race, and the live GPS position of the teams, along with the satellite photos and 3D terrain in Google Earth.
Matt Nolan, who runs EarthSLOT, has also included in the Iditarod file a link to the International Polar Year network link which contain all kinds of information about the Arctic and Antarctic and the science missions studying our polar regions. Matt is a scientist who studies Glaciers and other polar environmental features and worked with the IPY to develop the Google Earth content.

geograph is an amazing project which set out to collect photos of every square kilometer of the UK on a web site and map the locations and photos. Anyone can contribute to the project, and people view it as a game to go out and explore new areas of the islands with their GPS and contribute as many photos as they can. Statistically, the project has already made huge progress – with nearly 85% (see statistics) of the Great Britain part of the islands photographed. Not only that, but the site has grown up with the advances in mapping technologies, and there are now a myriad of ways to look at the data. In particular, Barry Hunter – who is a developer of great mapping tools available at his Nearby site – has added some really great Google Earth visualization tools for geograph. You can find the geograph GE tools at this web page, or you can just download his KML collection

which lets you try all the different presentations in one place. The screenshot here shows a 3D representation of photos taken for every 10 square kilometer section. You can also load visualizations that let you view each photo, and more.
geograph was started on March 6th, 2005. So today the project turns 3 years old! In honor of the date, they’ve made a cool picture mosaic which you can view in this blog post.
See previous story on geograph. 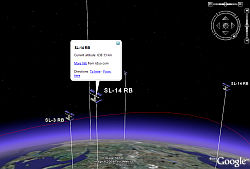 Robert Simpson is studying for his doctorate in Astronomy at Cardiff University in the UK. He has a blog called Orbiting Frog, and recently posted a tool that lets you view current positions of objects in orbit including the International Space Station, GPS satellites, Iridium satellites, and much more. He is using the NORAD two-line element (TLE) datasets that are published via the Celestrak website and are used by satellite enthusiasts for all kinds of software visualizations. He uses a Google Earth network link to automatically update the orbital positions every 30 seconds. He offers three different links for viewing in Google Earth:

The last really good orbit tracking visualization for Google Earth was done by Paul Seabury – but, he took it down after he got a contract to do something similar for someone. Hopefully Robert will keep this one running for a while. Robert also recently posted a cool astronomy layer for Google Earth – which I plan to write about later.
If you like live tracking applications, check out this really cool live airline flight tracking tool from FBOWeb.