I’ve been traveling this evening, or I would have reported sooner: Quick on the heels of France and Spain, now Italy gets some Street View coverage as well. Included locations are: Milan, Florence, Rome and Lake Como. That’s essentially three new countries to get notable Street View coverage in two weeks. Reports came in from Google Maps Mania, Digital Earth Blog and Google Blogoscoped, and I got an E-mail from GEB reader ‘Munden’ as well.
Here’s a shot of the Colliseum to start you on your tour of Italy:


View Larger Map
Don’t forget, you can see full 3D panoramas of each Street View image inside Google Earth. Here are some tips on using Street View in Google Earth.
So, which country do you think will be next? Already we have: US, Japan, Australia, France, Italy, and Spain. The UK is a highly anticipated one, but other countries have reported seeing the Google cars which take the pictures… 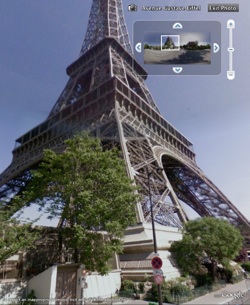 There was no post on Friday because I was attending the Annapolis Boat Show in Maryland. Given all the terrible news about the economy and stock market, I was thinking the boat show attendance would be down. But, people were there in droves. The weather was fantastic for one thing. But, American optimism is just amazing. I heard boats were still selling, and lots of boat accessories were selling as well. 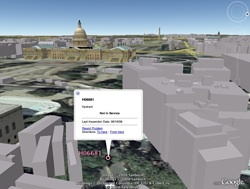 Washington DC is the first city I’m aware of to use Google Earth to report on the status of fire hydrants. The DC Water and Sewer Authority has released a KML network link

which reports on both working and non-working hydrants throughout the city. Not only that, but if you see a hydrant which is not working you can report it through the KML file placemarks! While fire hydrants may not be an every day concern for most people, I think this type of public information ought to be easily accessible to citizens of cities all over the world. This is GIS (Geographic Information Systems) for the masses with Google Earth making it easy to visualize and use the data. via DCist
An even better example of this I read about a while back was a city in India which had released a similar file showing potholes. Unfortunately, I didn’t find the KML file for this one, but here is a Times of India story on it. (UPDATE: A commenter below provides the link to the potholes interactive map – it uses Google Maps.) I can’t think of the number of times I’ve wished I had a mapping application online so I could report a pothole since I read that. In fact, I may actually write my local county office and suggest they do that. You could even write an iPhone app to make it even easier to report location!
(UPDATE 30-Sept.: GEB reader Joe Wade points to an excellent Google Earth plugin GIS map for Peachtree City, Georgia. This is my new favorite city-wide GIS site. Check it out.)
Some other examples of GIS with Google Earth: