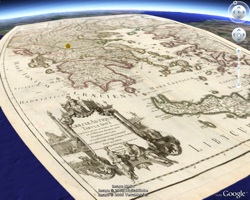 Over 100 new historical maps have been added to the Rumsey layer in Google Earth from David Rumsey’s map collection of over 17,000 maps he has available online. The maps range from complete global maps to historical maps for cities around the world. Turn on the layer under “Gallery->Rumsey Historical Maps“. You see placemarks for each map along with the date of the map and a thumbnail of what it looks like. Click on the thumbnail to load the map as an overlay in Google Earth. The maps are very fascinating to look at, and compare to the underlying “real” world. Select the layer and grab the transparency slider above to make comparisons, or turn on the “Borders” layer and adjust your zoom level to see how the borders match up to modern day political boundaries and coastlines. via Google Lat Long

According to CNET, Google is working on a new product rumored to be called “Google Ocean“. Apparently Google invited a bunch of oceanography experts last December to discuss creating a 3D oceanographic map. And now, rumors are flying on what might result.
Ever since Google Earth was released in 2005, many people have wondered why the ocean floors seen in relief color were not in 3D. According to posts by some of its developers, part of the reason had to do the 3D model of GE not allowing sub-surface rendering. There have been rumors for a long time Google was planning to add 3D to the oceans and allow sub-surface rendering for Google Earth. So, would this new ocean-viewing capibility mean another new version of Google Earth? Google Earth 4.3 was just released two weeks ago – it seems unlikely we’d see something else new right away. Or is the capability to render ocean floors already built in to 4.3 and they just need to turn on new servers to make the oceans 3D? Or, will we have to wait several months before Google Ocean is released?
There are three approaches to making Google Ocean. First, as suggested above: modifying Google Earth’s base terrain model to support ocean floor 3D data. This would be the best approach in my opinion. Keep it all in one application. Second, Google Ocean could be a different dataset like Google Sky where you switch to a different mode – connecting to a different server – still using the Google Earth application. Or, third, Google Ocean could be a whole new application. Hmm….
Google Earth’s capability to overlay images and placemark data has already enabled oceanographers and other scientists to add many useful layers of information about our world’s oceans. Here are just a few examples of useful marine visualizations for Google Earth:

This is part of a new series exploring Google Earth uses for different professions/hobbies.
If you’re a pilot, there are many ways Google Earth can be used to really enhance your trip plans both from an aviation and ground-based perspective. But, Google Earth goes way beyond just trip planning as a tool for pilots. I’m a pilot myself, and have been using Google Earth to enhance my flying experiences for nearly three years. 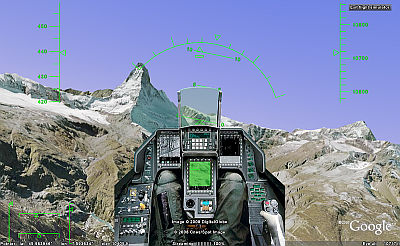 Here are just a few ways you might use Google Earth as a pilot: