We recently accidentally pressed the Backspace key in Google Earth and discovered that it takes you back to the previous ‘view’ and even pops up a little help window to tell you what it did and also suggests Ctrl-Backspace has the opposite effect i.e. if you had pressed backspace and gone back to a previous view, Ctrl-Backspace will take you ‘forward’ to the view you just came from.

We did some experimenting and found that Google Earth remembers everything you have looked at in a given session. A ‘view’ counts as when the earth is stationary in the viewing pane. So, if you move around and zoom in and out stopping between each movement then Google Earth records each pause as a ‘view’. Pressing Backspace repeatedly takes you back through all the things you have looked at. Then if you don’t click anything, you can use Ctrl-Backspace to take you forwards again through the same sequence.

We closed the little help window telling us about the functionality and could not get it back without editing the registry:
HKEY_CURRENT_USER\SOFTWARE\Google\Google Earth Plus\UndoViewNotificationShown=true

For it to work, it requires the ‘map’ area to be selected. So if, for example, you click something on the tool bar, such as switching to ‘historical imagery’, backspace will no longer work until you click on the map again. Also, if you have a placemark selected, backspace will offer to delete the placemark rather than the above functionality.

If any of our readers knows any other shortcuts not found on this list please let us know in the comments.

When browsing some of the latest imagery in the recent imagery update we came across some beautiful images of islands of the Tonga archipelago in the South Pacific Ocean and we thought of using them as desktop backgrounds. This is also how we found the image of Hunga Tonga and Hunga Ha’apai for yesterday’s post.

The standard version of Google Earth only allows you to save or print images of what is seen on screen. Although it is possible to make Google Earth run full screen (F11) and can hide almost all the menus, it isn’t really satisfactory for capturing a full screen-resolution image. However, Google Earth Pro is free and allows you to save images up to a resolution of 4800 x 2866. Just go to File->Save->Save Image or look for the ‘Save Image’ button on the tool bar. It brings up a small tool bar where you can specify the resolution and other options. For a desktop background you probably want to turn off all the extras (title, legend, compass etc).

Note that this will not result in imagery of higher resolution than what can be seen in Google Earth.

Here are a few backgrounds we created for ourselves, but we highly recommend having a look at various tropical islands around the world to find your own favourite locations. 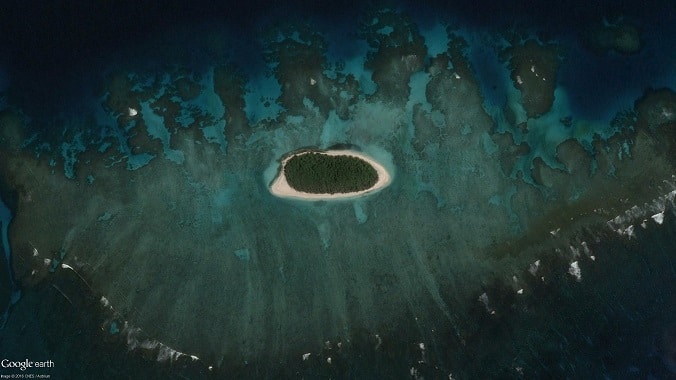 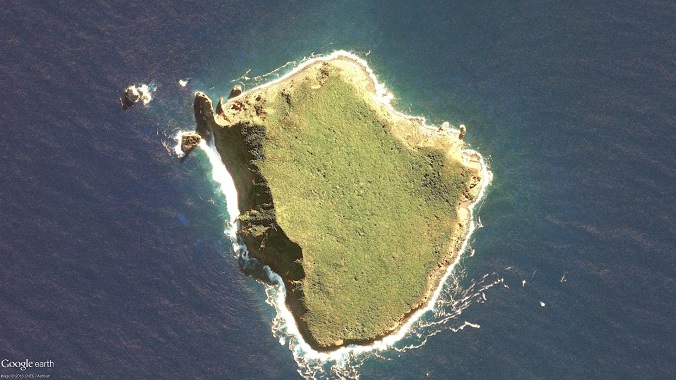 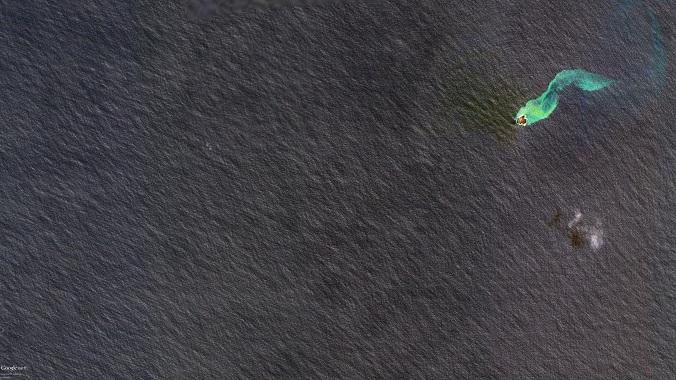 If you love satellite imagery then we certainly recommend Google’s ‘Earth View’ Chrome extension. It also allows you to easily save any image you like as a desktop background (see the extensions menu at the top left). You can also get a similar extension by Planet Labs featuring their imagery.

This post is some tips for creating historical imagery animations using the ‘Historical Imagery Tour Maker’ we released in yesterday’s post.

The Google Earth plugin, like the default setting in Google Earth, tilts the view towards the horizontal as you zoom in close to the ground. In Google Earth you can stop that behaviour in “Tools -> Options -> Navigation -> Navigation”. For the plugin, there is no access to the settings, so, if you want your animation to be from directly overhead, be sure to press ‘u’ on your keyboard to reset the tilt after you have zoomed in to your area of interest. For a list of other Google Earth keyboard shortcuts see this website

If you do not have very fast internet, set the ‘step’ to several seconds and click ‘play’ and allow it to cycle through all the imagery in order to cache the imagery before you begin. In addition, when creating your final tour, you can create two versions, one with a long ‘step’ to be run first to pre-cache the imagery, then another to play it at the desired speed.

If you use a step less than about 750 milliseconds, then Google Earth cannot keep up and will not show all the historical imagery when playing the tour. We are not sure whether this varies depending on your computer’s speed.

We have found that the built-in recording functionality (Tools->Movie Maker) of Google Earth Pro works rather well. However, it removes the historical imagery time bar and the status bar, so you cannot see the dates in the resulting footage. We used the highest quality settings and 10 frames per second. One nice feature of the Movie Maker is that it waits for imagery to load.

Before you start recording, make sure the tour is not set to auto repeat or the recording never stops.

Screen recording software can also be used. Use F11 to go full screen then hide the side bar and tool bar. We don’t know of a way to hide the menu.

Here are a couple of tours we have created:

Get the Google Earth tour here

Get the Google Earth tour here

We have recently been catching up on the outlines for our KML of Google Earth 3D areas. The internet speeds here in Cape Town increase every year, but we still seem to spend a lot of time waiting for Google Earth imagery to load. When tracing out 3D areas, we have found it helpful to pre-cache an area before starting to draw and we thought we should share the technique, as our readers could find it useful in a variety of circumstances. 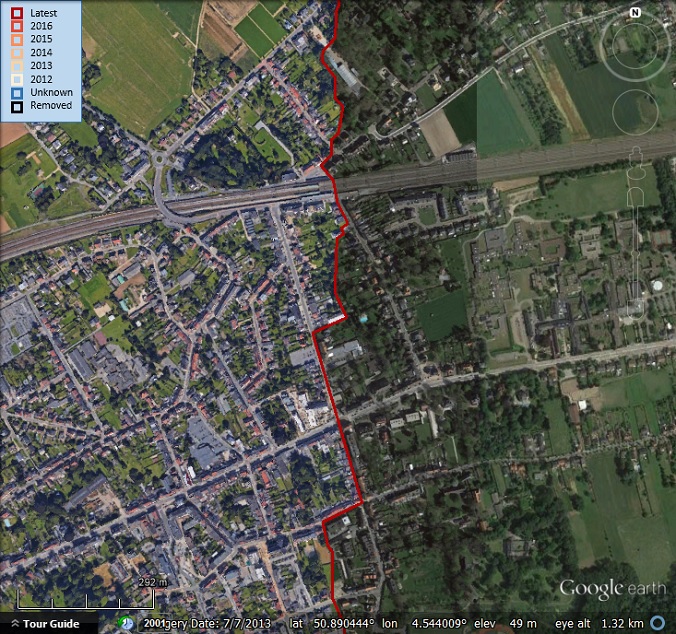 The border of the 3D imagery areas is often quite intricate.

The basic technique is very simple. Just draw a path where you wish to pre-cache imagery, then select the path and click the ‘Play Tour’ button that appears. Once the tour starts, go away and do something else for a while then come back when it is finished and you will find that imagery in the area you are interested in now loads much faster. 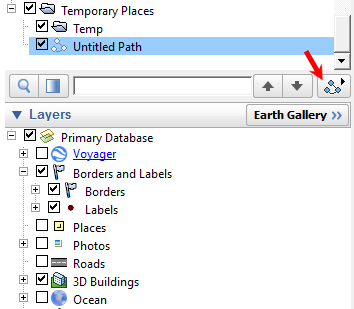 A ‘Play Tour’ button appears in the divider between Places and Layers whenever you select a path.

The default settings have the Google Earth ‘Camera’ follow the line quite closely and thus only imagery very near the line is cached. In addition, depending on the speed of your internet connection, the camera may move a bit too fast to fully cache the imagery before moving on. However, this can be adjusted with the settings found in Tools->Options->Touring: 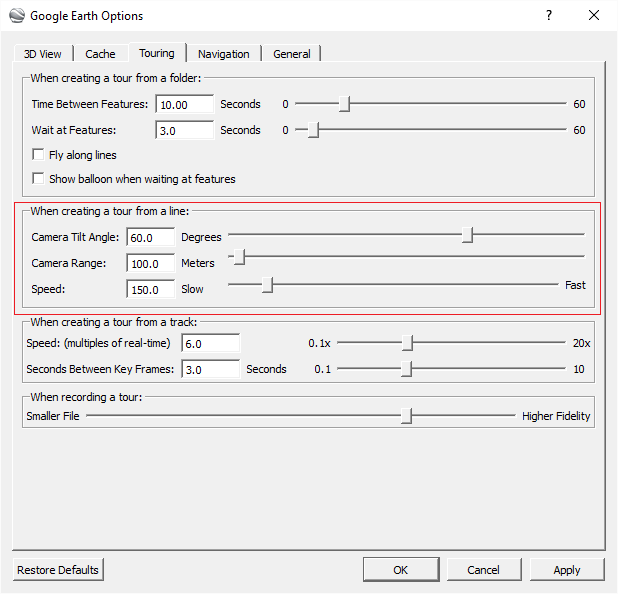 We like to set the Camera Tilt Angle to zero (looking straight down) and the Camera Range to 1000 metres. Start the tour and see if the imagery is managing to load completely before it goes off screen. If not, reduce the Speed setting.

The above technique can also be used if you plan to use Google Earth offline, as you can pre-cache an area by drawing a zigzag path across it. Be sure to test it before setting off on a long journey.

To learn more about Google Earth’s cache see some of our previous posts on the topic.

When you create placemarks in Google Earth you can change the icon of the placemark by going to the placemark properties and clicking the icon button found just to the right of the placemark name. Google Earth then shows you a default set of icons you can use. However, it is also possible to use custom icons, which you can easily get from the web, or even create your own. Simply click the ‘Add Custom Icon…’ button and enter the URL of the icon you want or select ‘Browse’ to choose an icon you have created or saved to your local computer.

Also of interest is the option to set ‘No Icon’. This is very useful when you want to put plain text somewhere on the screen.

You can easily find a wide range of icons by searching on Google. The two best collections we know of are the icons provided by Google that are catalogued here and mapsmarker.com, which provides a variety of free icons specifically designed for maps.

There are a few things you need to be careful about when using custom icons. If you use an icon off the web using the URL and at a future date the website you linked to removes the icon, the icon will no-longer display properly in Google Earth. The icons from Google mentioned above should be pretty reliable, but if you get an icon from other sites and you are distributing your KML file, make a judgement as to how long those sites are likely to remain active and consider hosting the icons yourself or downloading them to include in the KML file.

If you add a custom icon it will remain in the list for the duration of the session, but if you exit Google Earth it resets the list to the default set and you have to add it again if you want to use it in new placemarks.

Google Earth’s default icon set has been updated in the past.

Below are some icons that we created for our own use. Feel free to download them to use in your own KML files. They work best if you do not give the placemark a name. If you want to include a name then create an extra placemark with no icon then you can adjust the position of the text. You can save the individual icons by simply right clicking on them and selecting ‘Save image as..’ (or the equivalent depending on your browser) or download the whole collection as a zip file here.