Here are some more interesting applications of the Google Earth Plugin API. If you are using a supported browser/OS, then check out some of these new implementations:

I haven’t checked, but hopefully some of these sites are checking to see if your browser/OS supports the plugin, and doesn’t bother to offer you the option if you can’t use the plugin. I just had the thought that maybe I should use a different colored GE icon for links that go to the API (at least until all the main browsers/OSes are supported)…

It’s now been a few days since the Google Earth Plugin API was released during the Google I/O developer conference in San Francisco. I can tell you that I witnessed many KML developers get very excited about the possible applications of the new API and plugin. Several enthusiastic developers developed both demonstrations and actual tools within 24 hours of the announcement. An important note: Google made it plain they were releasing this new API and plugin without a full and rigorous testing. They wanted to take advantage of the opportunity to release it into the hands of developers at the Google I/O. This is part of the reason they didn’t wait until they had Mac OS X, and Linux versions of the plugin and API ready. Personally, I’m glad they are willing to get it into developer’s hands quickly even if there may be some flaws initially.
The new API provides access to many of the more popular features of Google Earth in a web browser. Quick implementations which take existing content viewed in Google Maps and show it with the power of Google Earth’s 3D rendering and rich data are just the low hanging fruit. What I’m more excited about is that the API will enable new kinds of applications not practical, or not possible, with the regular Google Earth client. Here are just a few ideas I’ve had which could be implemented with the new API: more sophisticated games as implied by the Monster Milktruck example; custom flight simulators (or even combat flight games); guided tours with audio annotations; scientific visualizations with multiple layers of information; many kinds of 3D model animations will now be possible; geographic quizes/games; educational lessons; etc., etc. For a long time many of us have wished for scripting capabilities for Google Earth. But, the API is more than that. In fact, someone could program a scripting language now and publishes it through an application using the API.
Some problems with the new plugin exist. Some of the problems are due to the 4.3 engine still being under beta test. I’ve noticed several navigational glitches (also present in 4.3). And, it’s a real bummer that the SpaceNavigator doesn’t work with the plugin (I understand from Google that part of this is due to the ability to have several instances of the plugin running simultaneously – hopefully someone will figure a way around this). Speaking of which, being able to open several instances at once is a nice feature. Microsoft’s Virtual Earth can only open one instance of their 3D plug-in at a time. One other thing – the current implementation is limited to only showing the following built in layers: Terrain, Borders, 3D Buildings, and Roads. Hopefully other global layers will also be added to those supported by the API – like Panoramio, Weather, Wikipedia, and places of interest layers. I can understand not supporting external sourced layers such as: NASA, National Geographic, etc.
On the legal side – some developers were wondering how the new API would be effected from a legal/licensing perspective. Michael T. Jones, CTO of Google Earth, just left this comment on GEB:

Two weeks ago the Google Earth free license was changed to allow broader use–especially in governments. Last week we launched the Google Earth API under the same liberal Terms of Service as the Google Maps API (essentially, free use for public-facing sites and inexpensive for inward-facing sites.) If you think there are legal barriers to your making good use of either, please have your attorneys review the latest agreements.

Next up, a post with some more interesting applications of the API/plugin.

The new Google Earth Plugin API has been adopted quickly by both Google Maps mashup developers and Google Earth developers. Given that Google Maps has long had limitations on the number of placemarks or other KML features it can show, the Earth plugin immediately enables more KML data to be viewed. That’s just one of many reasons why developers would want to quickly adopt the new plugin (besides the “show off” factor). I think this new plugin will be a huge hit and will be quickly adopted by many applications – especially once Google pushes out broader support on Mac and Linux as well. Right now, since the plugin is only working on Windows, developers should check what operating system people are using before presenting them with the plugin. No need to cause a plugin load error if a person is using Mac OS X. (See Gmap-Track below for the first example I’ve seen which addresses this.) In the 24 hours or so since it was released, at least 2 dozen apps have been released using the new API (probably many more than that just haven’t reached my attention yet). Below are just a few examples I’ve noticed, and there are links to more in other posts listed at the bottom. (NOTE: if you aren’t on Windows or using a browser supported by the new plugin – you won’t get to try all the links without a load error):

Other examples can be found at OgleEarth here. Naturally, since this blog has been writing about innovative applications of Google Earth for nearly three years, expect many more posts of examples of Google Earth plugin and its API as adoption continues to grow. 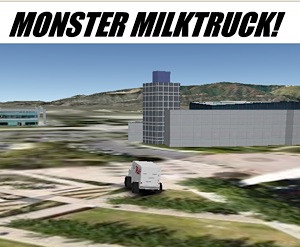 During the sessions here the Google I/O developers conference they have discussed how applications can be developed to take advantage of the new Google Earth Plugin API. One of the examples provided is a little game that I think just begins to show the possibilities of Google Earth plugin mashups – the game is called Monster Milktruck (NOTE: the GE Plugin is currently limited to Windows – and you have to install the plugin the first time you’ve used it). Once its loaded simply use the cursor keys to drive the little 3D truck around. Look at the bottom of the page for alternate locations where you can place the truck.