Late in 2010 we told you about Xavier Tassin’s excellent GE Flight Simulator, a remarkable flight sim that is powered by the Google Earth Plugin. The name has recently been changed to “GEFS Online” and he’s added a ton of new features. 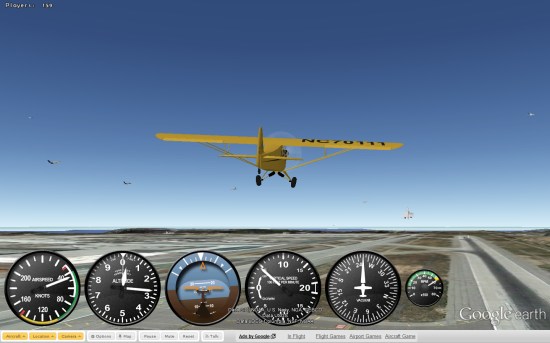 The new features include:
• Dynamic suspension on all aircraft
• Runway lighting at night
• Concorde, Cessna 152 and Zlin 50
• Aircraft lights
• An aircraft carrier you can take-off from and land onto.
• Reworked flight models – prop wash
• Reworked multiplayer
• Mach indicator
• Flight Path utility in map (thanks to Gustav)
• Gear, flaps, brakes and spoiler indicators
• Smoke effects on touch down
• Multimonitor support (experimental)
• Performance and stability improvements
We had high praise for the game when it first game out in late 2010, and with this update it’s become even better. The multiplayer mode is amazing -you can see other players flying around with you in real-time. Fortunately, there is no collision detection with other planes, so you can literally fly through each other. This is a wise move, as it makes it impossible for other players to disrupt your flight. However, it does have collision detection on buildings, so fly carefully! 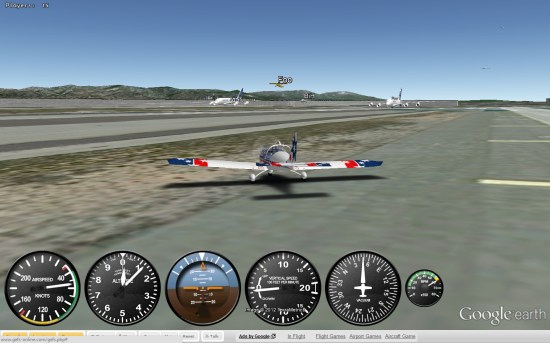 I also spent some time playing with the experimental multimonitor mode, which worked quite well. It was very similar to the fluid nebula experience (also created by Xavier). The game didn’t run particularly smoothly when going full-screen on all three monitors, but that’s to be expected when you’re trying to run three instances of the Google Earth Plug-in, each with 3D buildings and trees.
All in all, I’m incredibly impressed with this update. If you have any interest in flight simulators at all, you need to head over to gefs-online right now and give it a try. Great work, Xavier!

Late last year we showed you Xavier Tassin’s Google Earth Flight Simulator, which is a very well-built flight simulator that is powered by the Google Earth Plug-in. 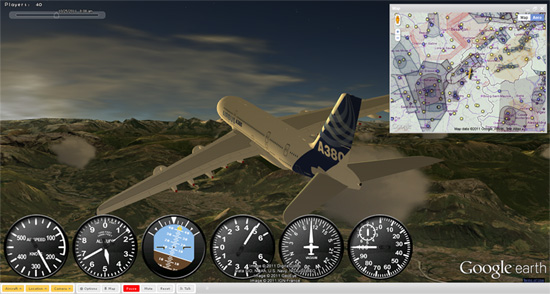 The site has seen solid growth over the past year, and now over 70,000 users visit each month, with 40 to 50 users connected at most times.
The latest version (.07) includes some nice upgrades:
• 10 aircraft: from the Piper Cub to the A380, through Douglas DC3 and Sukhoi Su-35, helicopters and hot air balloon.
• A map rendering over 30,000 runways to take off from and DAFIF airspace charts (using Google Fusion Table and Google Maps)
• Real time, local weather conditions (Cloud coverage, wind speed), wind lift on relief.
• In-game chat
• Time slider to select current time of the day.
• Improved physics, animations, flight models, instruments and multiplayer
• Improved user interface, fine control settings, saved preference
This is another great example of why it’s so great to build games using the Google Earth Plug-in — Xavier has certainly made some great enhancements, but there has also been thousands of new 3D buildings (and 3D trees) added to Google Earth in the past year, making it even better!
You can try it for yourself at ge-flightsimulator.com

or check out a few more beautiful screenshots below. 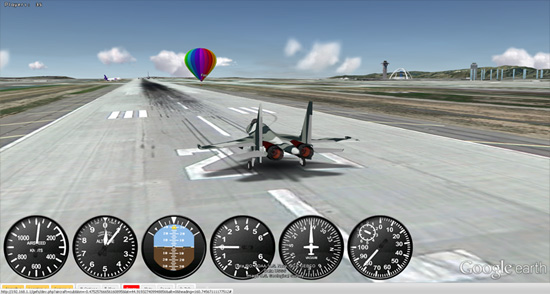 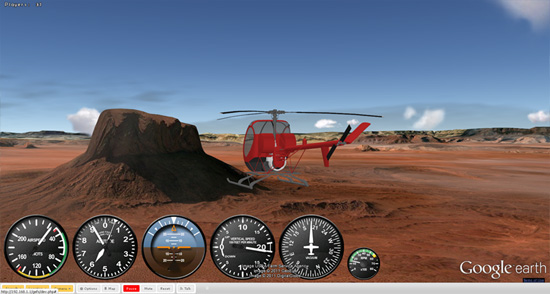 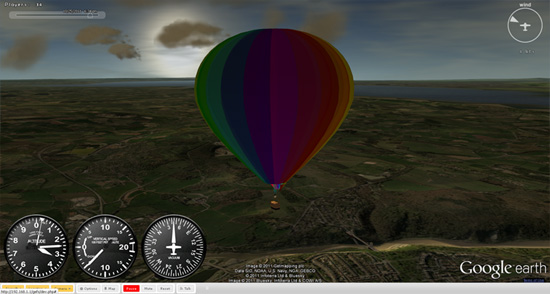 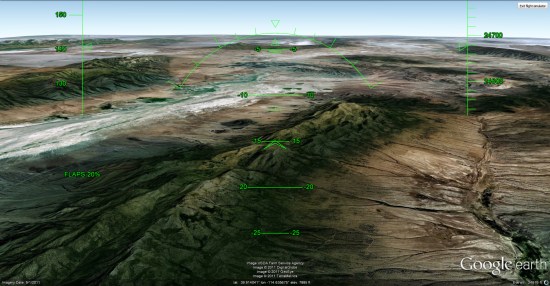 However, that wasn’t enough for user ‘that1anonymousdude’. He’s created a file that will modify your flight sim and let you turn the speed up really high. Using his mod, you can fly up to around 100,000 knots, while keeping solid control, and even fly up into space. It’s quite cool. Here’s a video of it in action:

His program modifies the flight sim config files to allow you to reach these crazy speeds (it doesn’t actually modify the actual Google Earth software). He’s released the source code so you can see how it works, and I’ve scanned it to verify there are no viruses or anything in it. However, always use caution when loading a third-party executable file on your computer.
To learn more about it and to try it for yourself, visit this thread in the Google Earth Hacks forums.

Alan Huestis writes the Google Earth Flight Sim blog, as he is a big fan of that feature in Google Earth (learn more about the Google Earth flight simulator). Like many of you, he purchased a joystick (the Logitech Attack 3) to help make the sim feel more realistic, but he wasn’t happy with the button mapping. To solve that, he re-wrote the joystick.ini file to make it easier to use. 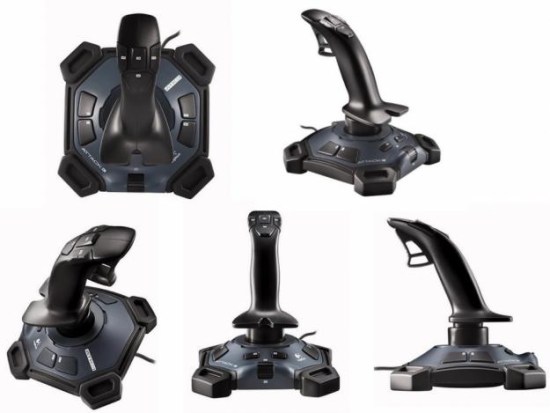 Here are the changes he made:

Here is the .ini file that Alan wrote to work with his joystick, named “Logitech_Attack3.ini”:

In his case, the file is located here:
C:\Program Files\Google\Google Earth\client\res\flightsim\controller
Simply replace that file with the contents above (after you back it up, of course) to be able to use his settings. If you tinker with the file and can improve it further, please let us know.
Great work, Alan!

Paul van Dinther is at it again, with another great Google Earth script for us to play with. You’ll remember Paul from fun projects he’s built such as Ships, Helicopters, and Drive the A-Team Van.
He’s now developed GExplorer, a fun way to fly through Google Earth. It’s a physics based 3D view controller that allows precise and smooth control of the camera. It does this by combining keyboard and mouse input. Camera movement is in 6 degrees of freedom meaning you can look anywhere and go anywhere. It takes some getting used to, but works amazingly well.
It feels a bit like the controls in a first-person shooter, where you move around with the keyboard and control your view with the mouse. The feeling of smoothly gliding over the mountains as you fly around Google Earth is quite amazing.
Here’s a video showing it in action:


You can try it for yourself over on his site. Google has recently purchased GExplorer from Paul for the express purpose of making it open source. If you’d like to integrate it with a project of yours, head over to Google’s GExplorer project page to get more information.