We’ve covered quite a few different games for Google Earth before, but we’re always on the lookout for more. A new project by Dustin at AlterEarth.net has a lot of potential, and we thought we’d share it with you.
Here’s what Dustin has to say about the site:

The concept is this: a free gaming site using Google Earth as the platform where users can play games, create and submit their own games, and edit current games to improve their functionality / features. I’ve created only a couple games for the site thus far, but over time that number will grow as users begin to submit their own games and I can focus more on the site development side of things. One of the games I’ve created is a grand theft auto style game, which I chose because I think it would get people interested and excited about the concept. 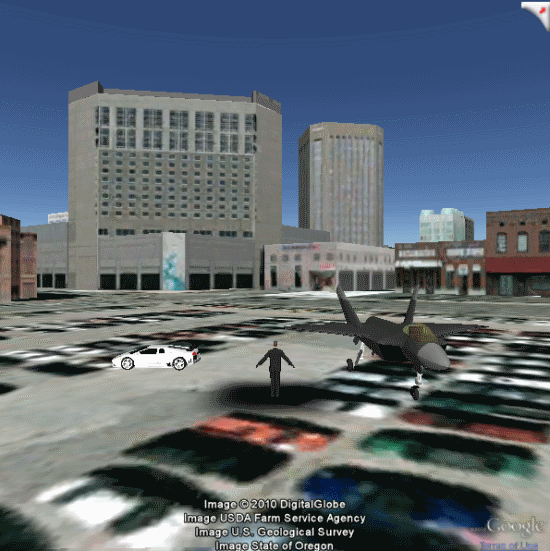 The games still seem to be quite buggy, but the idea of building a platform like this is a great idea. It seems to use a lot of the code from Monster Milktruck, which is probably a good place to start.
Here’s a video that shows off what their “Grand Theft Auto” game looks like:

You can try the GTA game here

. He also appears to have a “Zombie Earth” and a “Godzilla” game in progress, but there aren’t any details on those yet.
If you try any of them for yourself, leave a comment below and let us know what you think. Also, if you find (or create) and other Google Earth based games, please contact us and we’ll check them out!

FlightWise.com, with some help from Google, has just released a very nice KML that shows thousands of near real-time flights over the United States. 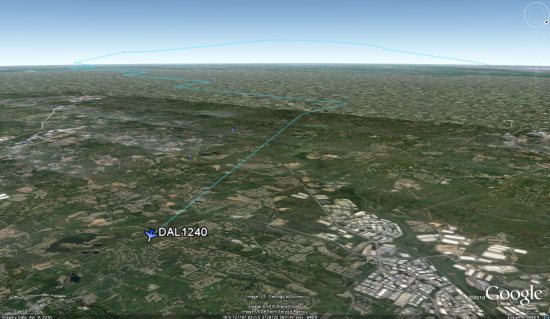 The data is roughly 15 to 20 minutes behind the current time, due to FAA restrictions. However, this is an excellent tool to get a look at all of the current flights in the US.
By hovering on a plane, you can see the flight number and a path of their journey to that point. Clicking on a plane gives you more information about the flight, including an option to view the full path of the flight as a KML tour. Opening the tour will show your plane with a larger red icon, and it will fly the entire path of its journey to that point. 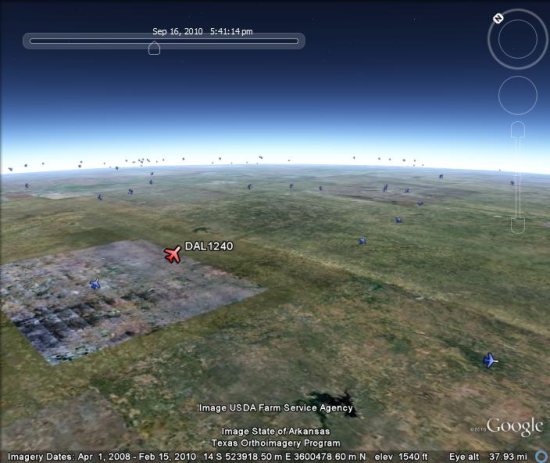 For more information or to try it for yourself, you can:
• Read about it on the Google Lat Long Blog
• Try it using the Google Earth Plug-in

• Download the KML file for use in Google Earth

During his stay aboard the International Space Station, Japanese astronaut Soichi Noguchi sent back many amazing photos from space via his Twitter account (@astro_soichi). A great example was just after the earthquake in Chile back in February; Soichi provided some of the first aerial photos of the damage.
Soichi landed safely back on earth earlier this week, but we thought we’d share one more of his photos. On it’s final flight, Soichi captured Space Shuttle Atlantis as it prepared to dock. Far off in the distance you can see the Canary Islands, just off the northwest coast of Africa. 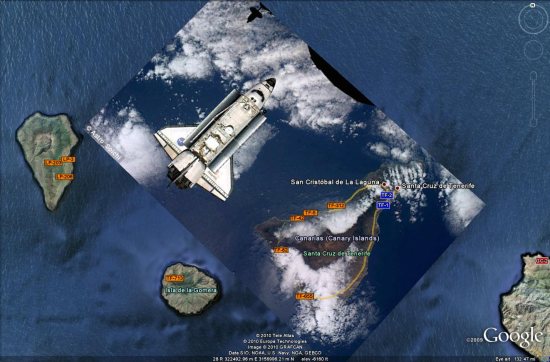 Google Earth Hacks user ‘Googlestar‘ then took the file and created a proper image overlay of it (as seen above). You can download the KML file here

.
Soichi posted hundreds of amazing photos during his journey in space, and I encourage you to check them out. You can view them all by browsing his Twitter account, but the easiest way is to simply visit his Twitpic page and view away. Enjoy!

Google Earth has been used for some interesting simulations, and some folks at the 2010 Kinnernet camp built an Iron Man simulator with Google Earth at the core. 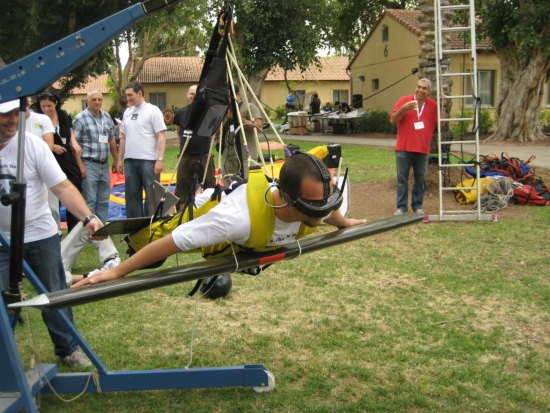 According to their site, the ingredients included:

Each of the 250 participants at the event were invited to try it out, though not many did due to the time it takes to get all of the equipment in place.
The Wii Remote underneath the rider was used to control the Google Earth Flight Simulator, which was being shown to the rider. In the past, we’ve shown a few (1, 2) ways that you can use the Wii Remote to control Google Earth.
They had the user fly above Kineret Lake, Israel, which is where the convention was being held.
For more you can check out their Flickr photoset, or watch the video below for a demonstration of how it all worked:

As promised back in April, PlanetInAction has released their “Helicopters” game just in time for Google I/O. 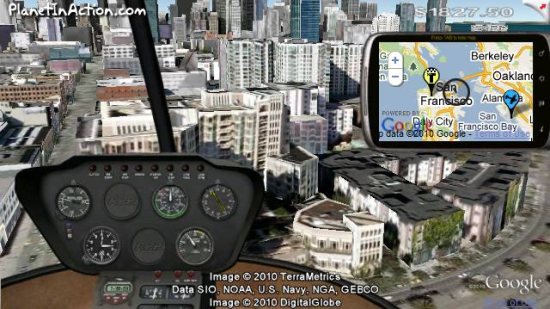 The game features a very nice tutorial mode to teach you the controls, then allows you to fly on various missions in San Francisco to earn money. At this point all of the missions are simply taxi services, but they have some cool missions planned. According to them:

At this stage “Helicopters only contains 2 mission types. One is your flight training and the other is Taxi services. But stay tuned. We have a long list of very cool missions lined up for you that we will release every month. You will be chasing cars into town, locating lost boats in the bay. Night-time, rain, fog. You get it all. You may even be send down-under where you help to drive cattle on a ranch or shoot deer in the mountains of New Zealand. How about ski helitours or testing low level radar detection systems. The list of planned missions is long.

All in all, this is certainly one of the most impressive Google Earth games I’ve ever seen. You can read more and see some video clips in our previous post about it, but you’d be better off to simply go give it a try right now at planetinaction.com/helicopters.