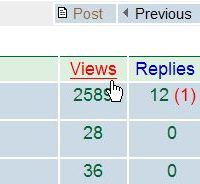 The GE/Keyhole Community BBS has some limited means of showing you which are the most popular Google Earth places. You can go to the subject forum of your choice – say “Earth Browsing” and then select the “Views” link (as shown to the right). This will sort the forum according to the most viewed threads. Reading the resulting threads will probably lead you to some interesting places, but it is not really a very good measure of the most popular downloaded GE files. I have yet to find a way to view the most downloaded GE files on the BBS. I assume Google will do this someday.
Another choice is the very nice gallery of Google Earth places at: www.gearthhacks.com. This site has a much nicer interface for determining good places to visit (note: you will have to do a minimal free registration to download from here). First, after going to their home page, click on “File Downloads”. Then, select “Most Popular“. Today’s top 5 places are:

To see the places themselves go here (after you have registered with GE Hacks you can load them into GE).
Another even nicer feature Google Earth Hacks has done is provide a network link which automatically shows you their current top rated places.

[NOTE: With Google Earth 4 you just find the “3D Buildings” layer in the Layers pane on the lower left. Also, updated to add Japan with 3D buildings.]

Another feature not found by some beginning users of Google Earth is the 3D buildings layer. You turn on the “Buildings” option and, for 38 of the largest cities in the US, and many cities in Japan, Google has created 3D models of the many buildings in that city. Try Chicago, Illinois for example. Make sure, after you turn it on, that you use the “Tilt” feature as I described in an earlier entry. 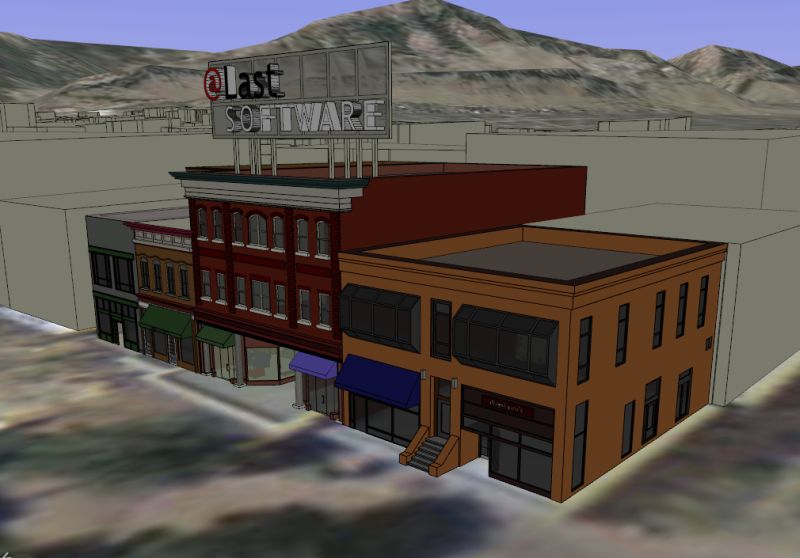 Some enterprising guys posted their own smaller town in 3D at the GE Community BBS with a very nice model of their company’s (@ Last Software) building in Boulder, Colorado. Here is their post, and you can open their version

of Boulder, Colorado in 3D. This is just a precursor of potential ways of advertising your business using the Google Earth.
[NOTE: if you aren’t seeing mountains, make sure the “Terrain” layer is turned on.]